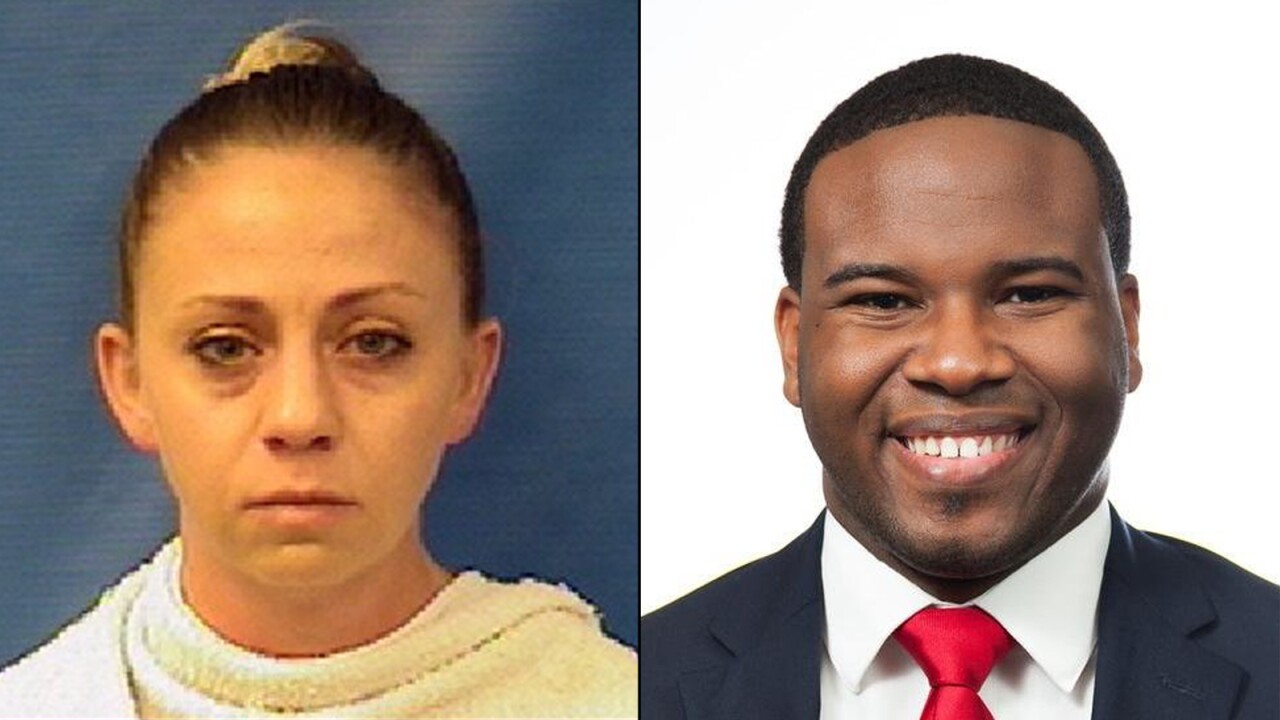 DALLAS — A Dallas jury on Tuesday found former police officer Amber Guyger guilty of murder for fatally shooting her unarmed neighbor, Botham Jean, in his own apartment, which she said she mistook for hers.

The jury deliberated less than 24 hours. The verdict followed a trial that has captured national attention and sparked outrage.

Judge Tammy Kemp asked Guyger and her lawyers to stand as she delivered the verdict.

“We the jury unanimously find the defendant, Amber Guyger, guilty of murder as charged in the indictment,” Kemp read, as a shriek and hand clap could be heard.

“No outbursts,” Kemp said before announcing a break until 2 p.m.

With the murder conviction, Guyger, 31, now faces up to life in prison.

Jean’s mother immediately threw both arms in the air upon hearing the verdict, then quickly retracted them. Another woman who started to shout in praise was chastised by a court officer. Members of Jean’s family sobbed. There were hugs among family members and prosecutors.

Guyger, her head down, wept at the defense table. Her mother broke down in the courtroom.

When the courtroom doors open, people in the hallway applauded and cheered. Some cried on hallway benches and shouts of “Guilty! Guilty” and “Black lives matter” could be heard.

Guyger, who is white, testified that after working long hours on September 6, 2018, she returned to her Dallas apartment complex and approached what she thought was her apartment. She noticed the door was partially open, and pulled out her service weapon and shot a figure inside in the dark. It turned out she was at the apartment directly above hers — which belonged to the 26-year-old man Jean, who was black — and she thought Jean was an intruder.

Tuesday morning, the panel had two questions for the court, according to attorneys for the Jean family. Jurors asked for a definition of manslaughter and for additional information on the so-called castle doctrine — the legal notion that your home is your castle, and you have the right to use lethal force to defend your home and not retreat. They were allowed to consider the legal doctrine in the murder case.

The jury began deliberations in the trial Monday. It had to decide if Guyger was guilty of murder or manslaughter, which could have resulted in two to 20 years in prison.

‘I wish he was the one with the gun’

In uniform but off duty following a daylong shift, Guyger testified last week that she wanted to “find the threat” after hearing movement in her apartment. That’s when she saw a silhouette and and demanded to see his hands, she said. The person started approaching in a “fast-paced walk,” she added, and she fired two shots at what she believed to be an intruder.

One of the bullets struck and killed Jean. Prosecutors said he had been relaxing in his apartment with a fresh bowl of ice cream shortly before the incident around 10 p.m. CT.

“I ask God for forgiveness, and I hate myself every single day,” Guyger said before the jury last week, her voice shaking. “I wish he was the one with the gun who had killed me. I never wanted to take an innocent person’s life.”

Guyger was distracted that night, prosecutors argued, texting with her married police partner, with whom she had sexual relations. They said she missed numerous signs in the hallways leading up to Jean’s apartment indicating she was on the wrong floor.

Lead prosecutor Jason Hermus also hammered Guyger for entering the apartment “to find the threat” rather than back away and seek cover or call for officer assistance over her police radio. He also argued she did not render enough first aid to Jean.

Experts have been unable to determine Jean’s exact position when he was shot. A medical examiner testified the bullet entered just above Jean’s upper left nipple and traveled downward, damaging his heart and several other major organs before landing in his psoas muscle.

“When you aimed and pulled the trigger at Mr. Jean, shooting him in center mass exactly where you are trained, you intended to kill Mr. Jean,” Hermus said.

Guyger described the moments after the shooting as chaotic as she realized she was in an unfamiliar place and had shot an innocent man. On the phone with a 911 operator that night, Guyger said 19 times she thought she had been in her apartment. Guyger said she performed a “little” CPR and a sternum rub on Jean.

Hermus, the lead prosecutor, pointed out she never used first aid supplies from the backpack she had when she shot Jean. Guyger testified that her mind was racing while on the phone with a 911 operator. She said it didn’t cross her mind that she had first aid supplies in her backpack.

Texas Ranger David Armstrong, the lead investigator of the case, said in court last week — while the jury was not in the room — that he believed Guyger’s actions were reasonable and that she did not commit murder, nor manslaughter or criminally negligent manslaughter. Despite multiple attempts by the defense team to have Armstrong offer his opinion before the jury, the judge would not allow it.

Guyger was initially charged with manslaughter in September 2018, but a grand jury indicted her on a murder charge the next month. The Dallas Police Department fired Guyger after the shooting.

The trial was laced with dramatic, emotional moments, as attorneys played graphic body cam footage of police trying to resuscitate Jean on his floor and read explicit sexual messages between Guyger and her police partner.

The castle doctrine and closing arguments

After six days of witness testimony, the prosecution and defense teams rested Monday morning, then presented a dramatic two hours of closing arguments. Prosecutors leaned heavily on their emotional appeal, while the defense urged the jury to use discipline and focus on the law.

In a significant move, the judge allowed Guyger’s attorneys to argue the so-called castle doctrine — or stand your ground laws — as part of their defense, since Guyger believed she was in her own apartment. Guyger’s actions were reasonable, defense attorneys said, and any ordinary person could have made the same mistake in a similar situation.

“The law recognizes that mistakes can be made. It’s always tragic. The law’s not perfect. It’s tragic, but you have to follow this law,” attorney Toby Shook told the jury.

Shook urged jurors to look at the case “calmly” and not decide on emotion, sympathy, or public pressure. “But you have to use the discipline not to do that,” he said.

“That’s hard, especially in a case like this,” he added. “You’ll never see a case like this, that’s so tragic. So tragic. It’s hard to do as jurors. Who would not have sympathy for Botham Jean? Wonderful human being — died in these horrible, tragic circumstances. Who would not have sympathy for his family or anyone in that position? Everyone does, but that is not part of your consideration as a jury.”

Prosecutors argued self-defense is thin legally because Guyger was not in her own home. She acted disproportionately, prosecutors said, and had less lethal options available, like using her stun gun or mace, rather than acting immediately with deadly force.

“Self-defense is an option of last resort. She killed him unreasonably and unjustifiably,” said lead prosecutor Jason Hermus.

The self defense argument should apply to Jean, not Guyger, they said. “It’s not her apartment. There was not force. It’s not occupied. She doesn’t need castle doctrine,” said Assistant District Attorney Jason Fine. “No. This law is not in place for her, it’s in place for Bo.”

Hermus argued it was “absolutely unreasonable” that Guyger missed numerous signs, including a bright red doormat outside Jean’s door, that indicated she was at the wrong apartment.

Hermus had the final word in closing arguments, walking right up to Guyger in her seat, pointing at her, looking her in the eye, and forcefully urging the jury to tell Guyger: “You will be held responsible for what you did and whether or not you want to accept responsibility, it will be forced upon you.

“And by God in Dallas County, Texas,” he continued, “there will be a consequence for you walking in and shooting an unarmed, defenseless man.”