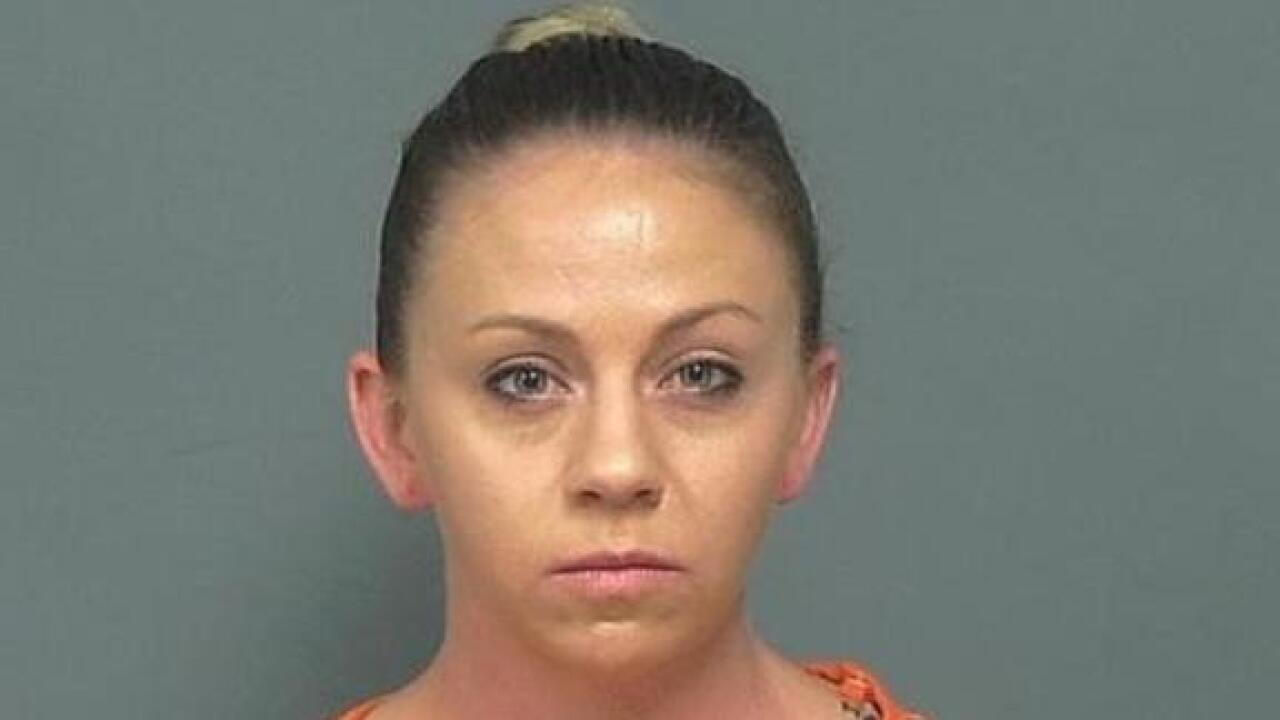 Allison Jean was first to take the stand at Amber Guyger‘s sentencing hearing Tuesday afternoon, fighting back tears as she described the day she learned her son had been fatally shot.

“I was in New York with my daughter at 12:13 a.m. on September 7th when she came to inform me that she had gotten a call and that somebody told her that Botham was shot, that he died,” she said.

Wearing red — her son’s favorite color — Allison Jean testified hours after a Dallas jury found Guyger guilty of murder. Guyger fatally shot Botham, her unarmed neighbor, in his own apartment, which she said she mistook for hers.

Allison Jean talked about how Botham — the middle child — was “the glue” that brought her three children together. She smiled as she was shown photo of her son.

“I have to tried to keep that family together because everybody’s in pain,” she said, adding that she goes to weekly therapy sessions.

Allison Jean was mostly composed and spoke proudly of her son and how, at age 11, he ranked 23 out of about 4,000 students on the island of St. Lucia who took a selective high school entrance exam.

“We have a simple life, one of faith and that’s how we raised our children,” she said, adding that she has been married 30 years.

Allison Jean said she would have preferred that Botham remained at home for his studies, but he wanted to attend Harding University, a private Christian school in Arkansas where became president of the student council, sang in a choir and led community service missions with other students to the island. She described him as loving and giving and passionate about helping others.

She said her youngest son Brandt, 18, spent part of the the summer of 2017 in Dallas with Botham, who worked as an accountant and would have turned 28 on Sunday. When Brandt was leaving, Botham called his mother crying.

“He didn’t want Brandt to leave,” she said. “He felt that Brandt spent three weeks with him and the first week, he said he had a lot of work to do and he really regretted that he didn’t spend enough time with Brandt.”

Allison Jean said she is concerned for her youngest son, who has gone from punching walls in anger after his brother’s death to not saying much about his feelings.

In court, Allisa Findley, Botham’s sister, watched a video of her brother singing at church. His voice makes her miss him, she said.

“I want my brother back,” she said.

Findley said she calls home more to check on her mother, father and younger brother. None of them are the same. She recalled how her brother would call her in the middle of the night when he was in school so she could order a pizza and send it to his dorm room.

‘A signal that the tide is going to change’

Guyger, who is white, testified that after working long hours on September 6, 2018, she returned to her Dallas apartment complex and approached what she thought was her apartment. She noticed the door was partially open, saw a man inside who she believed to be an intruder, and fired her service weapon.

It turned out she was at the apartment directly above hers — which belonged to the 26-year-old Jean, who was black. Prosecutors said Jean had been on the couch in his shorts, watching TV and eating vanilla ice cream when Guyger walked in.

Though the topic of race did not figure prominently in the trial itself, outside the courtroom, Jean’s case became a focal point in the national conversation on policing and the threat of violence people of color face in daily life.

Earlier Tuesday, after deliberating less than 24 hours, the jury reached a verdict.

Judge Tammy Kemp asked Guyger and her lawyers to stand as she delivered it. “We the jury unanimously find the defendant, Amber Guyger, guilty of murder as charged in the indictment,” Kemp read, as a shriek and hand clap could be heard.

Jean’s mother briefly threw both arms in the air. Another woman who started to shout in praise was chastised by a court officer. Members of Jean’s family sobbed. There were hugs among family members and prosecutors after the jury left the courtroom.

With the murder conviction, Guyger, 31, now faces up to life in prison. The former officer, her head down, wept at the defense table. Her mother broke down in the courtroom.

When the courtroom doors opened, applause and cheers erupted in the corridors. Some cried on hallway benches and shouts of “Guilty! Guilty!” and “Black lives matter!” could be heard.

Outside court later, S. Lee Merritt, an attorney for Jean’s family, called the rare murder conviction against a police officer a “huge victory” not only for the victim’s family but also “for black people in America.”

“It’s a signal that the tide is going to change here,” he told reporters. “Police officers are going to be held accountable for their actions and we believe that will begin to change policing culture all over the world.”

Another family attorney, Benjamin Crump, cited the names of numerous unarmed African Americans who have died at the hands of police.

“For so many unarmed black and brown human beings all across America, this verdict is for them,” he said.

The Jean family would have no comment until after testifying at the sentencing phase later Tuesday, the attorneys said.

‘I wish he was the one with the gun’

In uniform but off duty, Guyger testified last week that she wanted to “find the threat” after hearing movement in her apartment. She said she saw the silhouette of a man and demanded to see his hands. He approached in a “fast-paced walk,” she added, and she fired two shots at what she believed to be an intruder.

Prosecutor Jason Hermus told jurors that the trajectory of the bullet suggests Jean was getting up from a chair when Guyger fired, or he was on his knees, trying to hide from her. Experts have been unable to determine Jean’s exact position when he was shot.

One bullet struck and killed Jean. A medical examiner testified the bullet entered just above Jean’s upper left nipple and traveled downward, damaging his heart and several other major organs before landing in his psoas muscle.

“I ask God for forgiveness, and I hate myself every single day,” Guyger told the jury, her voice shaking. “I wish he was the one with the gun who had killed me. I never wanted to take an innocent person’s life.”

Guyger was distracted that night, prosecutors argued, texting with her married police partner, with whom she had had sexual relations. They said she missed numerous signs in the hallway leading up to Jean’s apartment indicating she was on the wrong floor.

Hermus also criticized Guyger for entering the apartment rather than backing away and seeking cover or calling for assistance over her police radio. He argued she did not render enough first aid to Jean.

“When you aimed and pulled the trigger at Mr. Jean, shooting him in center mass exactly where you are trained, you intended to kill Mr. Jean,” Hermus said.

On the phone with a 911 operator that night, Guyger said 19 times she thought she had been in her apartment. Guyger said she performed a “little” CPR and a sternum rub on Jean.

Texas Ranger David Armstrong, the lead investigator, said in court last week — while the jury was not in the room — that he believed Guyger’s actions were reasonable and that she did not commit murder, nor manslaughter or criminally negligent manslaughter. The judge would not allow him to offer his opinion before the jury.

Guyger was initially charged with manslaughter in September 2018, but a grand jury later indicted her on a murder charge. The Dallas Police Department fired Guyger.

The trial was laced with dramatic, emotional moments, as attorneys played graphic body cam footage of police trying to resuscitate Jean and read explicit sexual messages between Guyger and her police partner.

The castle doctrine and closing arguments

After six days of witness testimony, the prosecution and defense teams rested Monday morning, then presented two hours of closing arguments. Prosecutors leaned heavily on their emotional appeal, while the defense urged the jury to use discipline and focus on the law.

In a significant move, the judge allowed Guyger’s attorneys to argue the so-called castle doctrine — or stand your ground laws — as part of their defense, since Guyger believed she was in her own apartment. Guyger’s actions were reasonable, defense attorneys said, and any ordinary person could have made the same mistake in a similar situation.

Defense attorney Toby Shook urged jurors to look at the case “calmly” and not decide on emotion, sympathy, or public pressure. “But you have to use the discipline not to do that,” he said.

“That’s hard, especially in a case like this,” he added. “You’ll never see a case like this, that’s so tragic. So tragic. It’s hard to do as jurors. Who would not have sympathy for Botham Jean? Wonderful human being — died in these horrible, tragic circumstances.”

Prosecutors argued self-defense did not apply because Guyger was not in her home. She acted disproportionately, prosecutors said, and had less lethal options available, like using her stun gun or mace.

“Self-defense is an option of last resort. She killed him unreasonably and unjustifiably,” said Hermus.

The self defense argument should apply to Jean, not Guyger, they said. “It’s not her apartment. There was not force. It’s not occupied. She doesn’t need castle doctrine,” said Assistant District Attorney Jason Fine. “No. This law is not in place for her, it’s in place for Bo.”

Hermus, in closing arguments, walked up to Guyger in her seat, pointed and looked her in the eye, and urged the jury to tell her: “You will be held responsible for what you did and whether or not you want to accept responsibility, it will be forced upon you.

“And by God in Dallas County, Texas,” he continued, “there will be a consequence for you walking in and shooting an unarmed, defenseless man.”