The impeachment process: How it all works 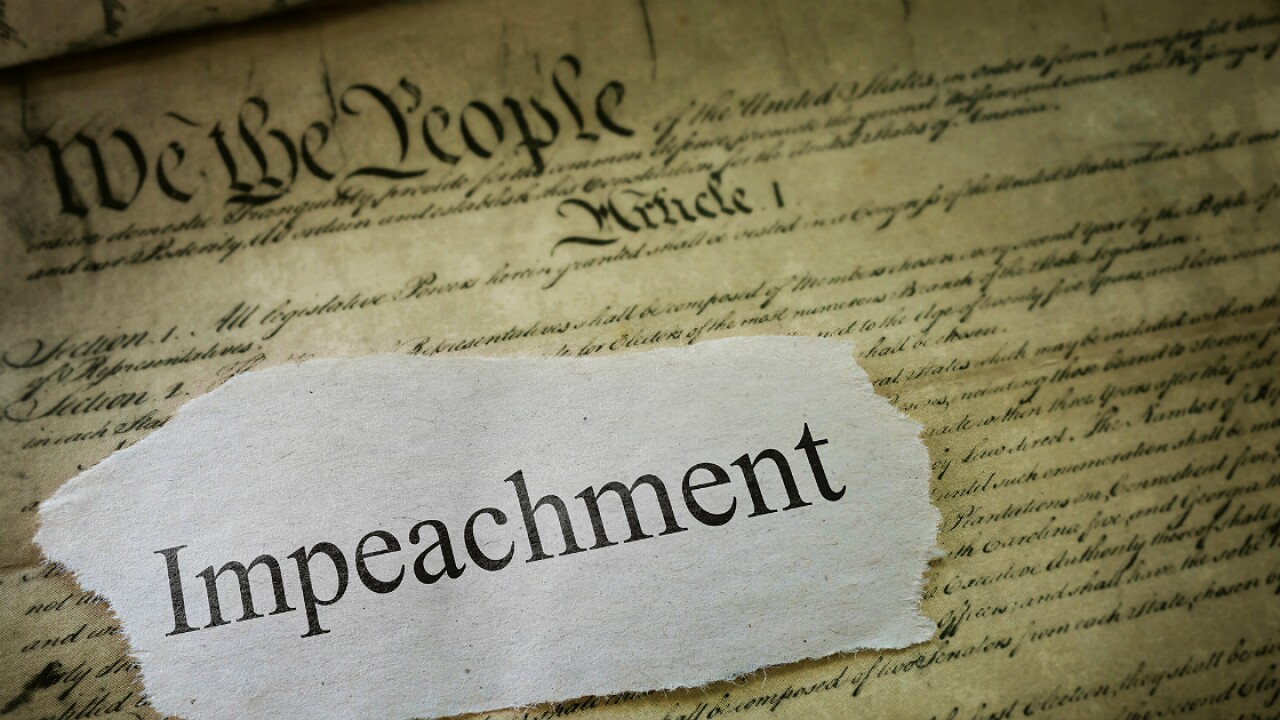 Calls to impeach President Donald Trump began among some Democrats almost the day he was inaugurated. They ballooned after former special counsel Robert Mueller’s report to Congress about interactions between the Trump campaign and Russia and, separately, Trump’s efforts to squash the investigation, potentially obstructing justice.

But now that Trump has admitted to trying to influence Ukrainian President Volodymyr Zelensky to investigate Joe Biden at the same time he had frozen US military aid to Ukraine, the calls among Democrats have reached a tipping point and House Speaker Nancy Pelosi announced the House will officially initiate impeachment proceedings against Trump.

Here’s what needs to happen for Democrats in the House to impeach Trump, which seems increasingly likely, and for the Senate to remove him from office, which still seems very unlikely. Much of the information here is taken from a report by the Congressional Research Service and other sources.

The two most recent presidential impeachments began with a vote in the full House. Pelosi has broken with this format and has chosen to instruct the six House committees already investigating Trump to proceed “under that umbrella of impeachment inquiry.”

Rep. Jerry Nadler, the current chair of the House Judiciary Committee, has argued that his current oversight of the Trump administration equaled the beginnings of an impeachment inquiry.

Formalizing it could help the committee in its effort to get Trump administration officials to cooperate. Instead, they have at times stonewalled, claimed executive privilege, and ignored subpoenas.

During previous impeachment inquiries, a House committee, usually the Judiciary Committee or its subcommittee, conducts an investigation to see if a federal official’s conduct warrants impeachment.

This will be a contentious process.

Clinton sent lawyers and legal experts to argue his case and defend him before the House Judiciary Committee.

Nixon defied the committee’s request for tapes of his Oval Office conversations. Ultimately, the Supreme Court ruled he had to turn them over to a special prosecutor and that process unfolded in tandem with the impeachment process.

But in Pelosi’s version, each of the six committees — Judiciary, Intelligence, Ways and Means, Financial Services, Oversight and Foreign Affairs — will continue with their investigations, looking at different elements of Trump’s presidency, his past and his businesses. These committees months ago already sorted out the different areas they are investigating, and many of the investigations are still charging ahead or their fights are tied up in court.

After these inquiries, in another break from recent precedent, each of the committees will provide input to include in articles of impeachment that would be written up under the House Judiciary Committee, which would vote on whether to refer them to the full House of Representatives. After that committee vote, the articles, if approved, are given special status on the House floor and it requires a simple majority of voting lawmakers to approve them.

Here are the articles of impeachment offered against President Bill Clinton.

Here are the articles of impeachment prepared for Richard Nixon.

Currently, Democrats hold a 235 to 198 majority over Republicans. Michigan Rep. Justin Amash, who left the Republican Party in July after announcing his support for impeachment proceedings, is the chamber’s one independent and there is one vacancy. Assuming Amash votes with Democrats, they could afford to lose 18 Democrats and still achieve a majority.

At this point, Trump would face a choice shared by only three other presidents: be impeached and fight for your office in the Senate or resign. Both Clinton in 1999 and President Andrew Johnson in 1868 fought in the House and ultimately survived a Senate trial. Nixon, after learning that Republicans would not support him during impeachment, resigned before the House could vote to impeach him.

There were four articles of impeachment against Clinton, but only two were approved, on mostly party-line votes with a few defections.

After the House votes to impeach a President, the Constitution calls for a trial in the US Senate. There is some question as to whether Republicans in the Senate would even bother since they likely have the votes to easily dismiss the charges.

Senate Majority Leader Mitch McConnell simply decided not hold a vote on Merrick Garland’s nomination by President Barack Obama to sit on the Supreme Court. There’s been plenty of speculation about whether McConnell would simply decide not to hold an impeachment trial.

If there were a trial, senators become jurors and the chief justice of the US Supreme Court presides — that’s John Roberts. The House votes on managers who bring the trial in the Senate. Although they might be helped by outside counsel, the House managers actually bring the trial and present evidence. The impeached official can offer a defense or have counsel do it.

While Democrats hold a majority in the House, Republicans control the Senate with a 53-45 majority. Two independents usually side with Democrats. But it takes a supermajority to remove a President from office. That means 67 senators would have to agree that Trump should be removed from office.

With the current party split, 20 Republicans would have to turn on him. At the moment, exactly zero Republicans senators have said anything close to supporting the idea of impeachment.

How long does this take?

Pelosi has not given a timeframe for this process but she told her colleagues it would be done “expeditiously,” and Nadler has hoped to conclude it by the end of the year.

This process can take months. For Johnson, the entire process lasted 94 days, from first congressional action to Senate acquittal, lasted from February 22, 1868 to May 26, 1868.

For Richard Nixon, it lasted 184 days. The House approved the impeachment inquiry on February 6, 1974 and Nixon resigned.