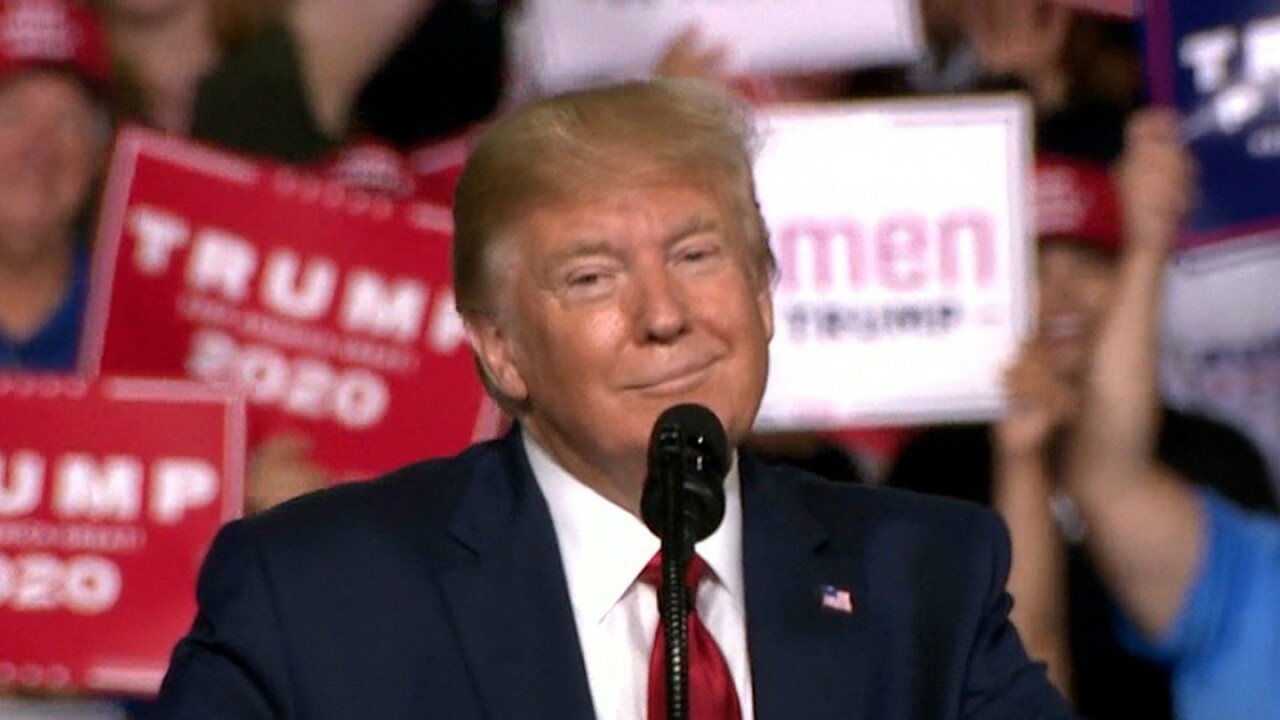 President Donald Trump on Sunday acknowledged that he discussed former Vice President Joe Biden in a July call with Ukraine’s president, as Democrats strengthened calls for investigation into Trump’s contact with the foreign leader and party leadership warned of a new lawless chapter in the United States.

Trump, while speaking with reporters before departing the White House for events in Texas and Ohio, continued to defend his July 25 call with Ukrainian President Vologymyr Zelensky, but said the 2020 Democratic presidential primary candidate was discussed in the exchange.

There is no evidence of wrongdoing by either Joe or Hunter Biden.

Trump previously branded criticism of the call a “Ukranian Witch Hunt,” while Biden accused the President of abusing his power to “smear” him. On Sunday, the President said he hopes officials release details of the call, but slammed the whistleblower responsible for filing a complaint.

House Speaker Nancy Pelosi issued a strong warning later Sunday to the Trump administration, which has refused to hand over the whistleblower complaint, saying it “will be entering a grave new chapter of lawlessness” if the resistance persists.

The warning, shared in a letter to all House members, comes following a refusal last week by acting Director of National Intelligence Joseph Maguire to turn over the complaint to Congress. In her letter, Pelosi, a California Democrat, said if the administration’s refusals continue, it would constitute a “serious possible breach of constitutional duties by” Trump and would take Congress “into a whole new stage of investigation.”

The Democratic leader’s letter threatens investigation at a time when the White House is already facing House inquiries on multiple fronts and a continuing impeachment investigation by the House Judiciary Committee. The Trump administration has so far split on how to handle the details of the call, but any House-led investigation into the President’s Ukraine contact could meet significant resistance from the White House, as it has stonewalled many of the congressional probes already in motion.

Weighing in on the controversy earlier Sunday, House Intelligence Committee Chairman Adam Schiff said that impeachment “may be the only remedy” to Trump’s refusal to make public the complaint and phone call transcript.

“If the President is essentially withholding military aid at the same time that he is trying to browbeat a foreign leader into doing something illicit that is providing dirt on his opponent during a presidential campaign, then that may be the only remedy that is coequal to the evil that conduct represents,” the California Democrat told CNN’s Jake Tapper on “State of the Union,” stopping short of calling on Congress to immediately launch proceedings.

Schiff, who has so far resisted joining other Democrats in calling for impeachment, told Tapper he has been “very reluctant” to push for proceedings against the President because he sees it as a “remedy of last resort,” but also said Sunday that the President doesn’t have the authority “to engage in underhanded discussions.” The chairman’s apparent edging toward impeachment follows pressure from others in his party — including from Massachusetts Sen. Elizabeth Warren and New York Rep. Alexandria Ocasio-Cortez — to start proceedings.

On Friday, Warren, who is vying for her party’s presidential nomination, tweeted that “Congress is complicit” in failing to start impeachment proceedings against Trump after news broke that he had allegedly pressured Zelensky to investigate Hunter Biden.

Echoing Warren’s sentiments, Ocasio-Cortez suggested in a tweet on Saturday that her party’s “refusal to impeach” Trump was an even bigger scandal than what she said was the President’s “lawbreaking behavior.”

Asked by Tapper Sunday about Trump keeping conversations with foreign leaders private, Schiff said: “Well not if those conversations involve potential corruption or criminality or leverage being used for political advantage against our nation’s interest.”

“This would be, I think, the most profound violation of the presidential oath of office, certainly during this presidency, which says a lot, but perhaps during just about any presidency. There is no privilege that covers corruption. There is no privilege to engage in underhanded discussions,” he said, adding that he’s not certain that the call is the subject of the complaint.

The President on Sunday described his conversation with the Ukrainian president as “warm and friendly” and repeatedly urged reporters to look instead at Biden and Democrats, who he said — without providing evidence — have “done some very bad things.”

But while the President suggested he was open to releasing the conversation, telling reporters: “I hope they can put it out,” Secretary of State Mike Pompeo said there’s no evidence such an action “would be appropriate” at this time.

“We don’t release transcripts very often. It’s the rare case,” Pompeo said Sunday on ABC’s “This Week.” “Those are private conversations between world leaders, and it wouldn’t be appropriate to do so except in the most extreme circumstances. There’s no, there’s no evidence that would be appropriate here at this point.”

Treasury Secretary Steve Mnuchin also weighed in, telling Tapper Sunday that he thinks releasing the transcript “would be a terrible precedent,” arguing that “conversations between world leaders are meant to be confidential.”