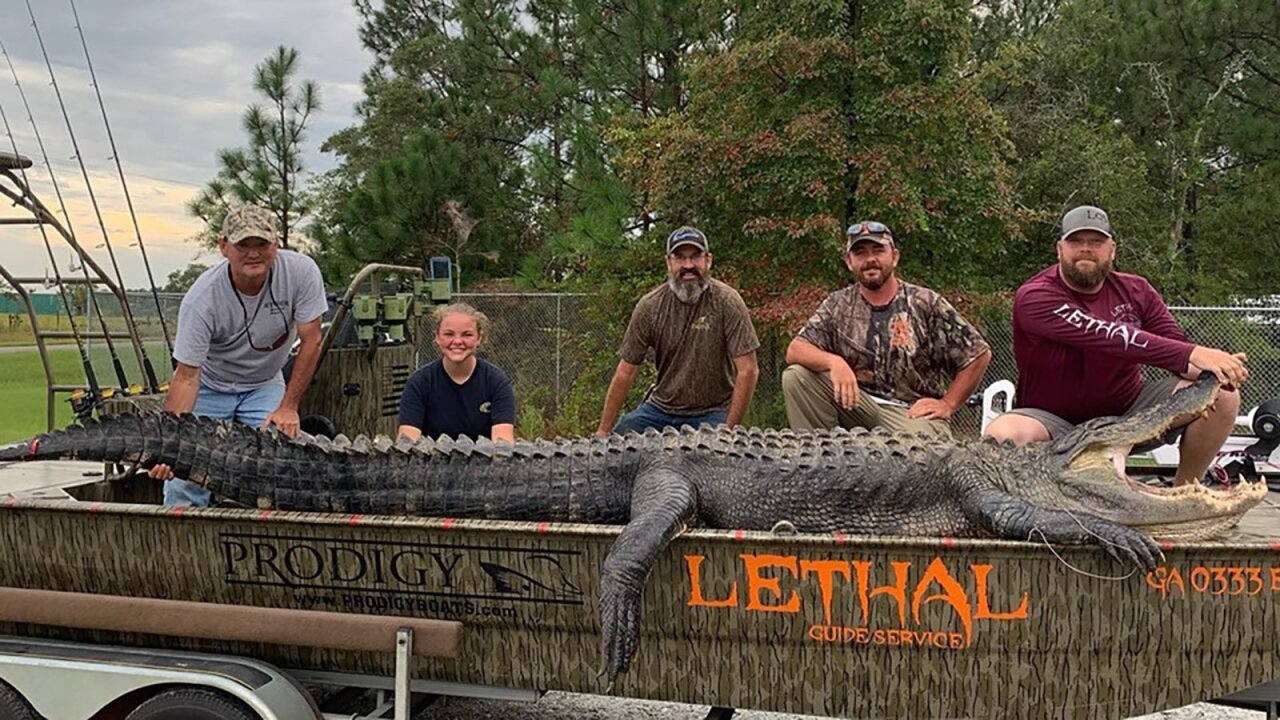 The Snelsons and members of Lethal Guide Service pose with their 14-foot long alligator.

A Georgia man may have just broken a state record after bagging a massive 14-foot alligator.

Derrick Snelson and his daughter, Shelby, were on Lake Eufaula with Lethal Guide Service, a hunting guide business, when they made the catch on September 1. It was only Snelson’s second time hunting alligators, and Shelby’s first.

The team spent six hours tracking the beast before finally getting a hook in the animal, shooting it and hauling it aboard the boat. The whole process was a team effort, Derrick said.

“To be honest with you, we were just happy to see how big it was,” he told CNN. “I ain’t never caught anything like that before, it was just amazing.”

Shelby Snelson poses with the alligator and a member of the Lethal Guide Service team.

They took the animal to the Georgia Department of Natural Resources for an official measurement, which came in at 14 feet and 1.75 inches, said Darrell Brown, owner of Lethal Guide Service. The catch is probably a new state record, with the previous record being 13 feet and 10.75 inches, though CNN could not reach the DNR on Sunday to confirm.

Shelby, 14, described the experience as kind of scary, but awesome.

“[The boat] was rocking back and forth, and a few times [the gator] hit the side of the boat with its tail,” she said, almost knocking her off.

But that won’t stop Shelby, who said she would “jump in the truck right now” if anyone asked her to go gator hunting again. It’s an adrenaline rush she won’t forget anytime soon.

“I’m glad I got to have that experience with my dad,” she said.

The Snelsons have already skinned the animal to use the meat. They’re also getting the gator mounted — all 14 feet — but Shelby said she has “no idea” where they’re going to put it.

“Might have to build a house around it,” she joked.

Georgia has an official alligator hunting season to help manage the state’s flourishing gator population. The season for this year began at sunset on August 16 and runs until sunrise on October 7.

Hunters must apply for a special license to participate and are limited to one alligator.