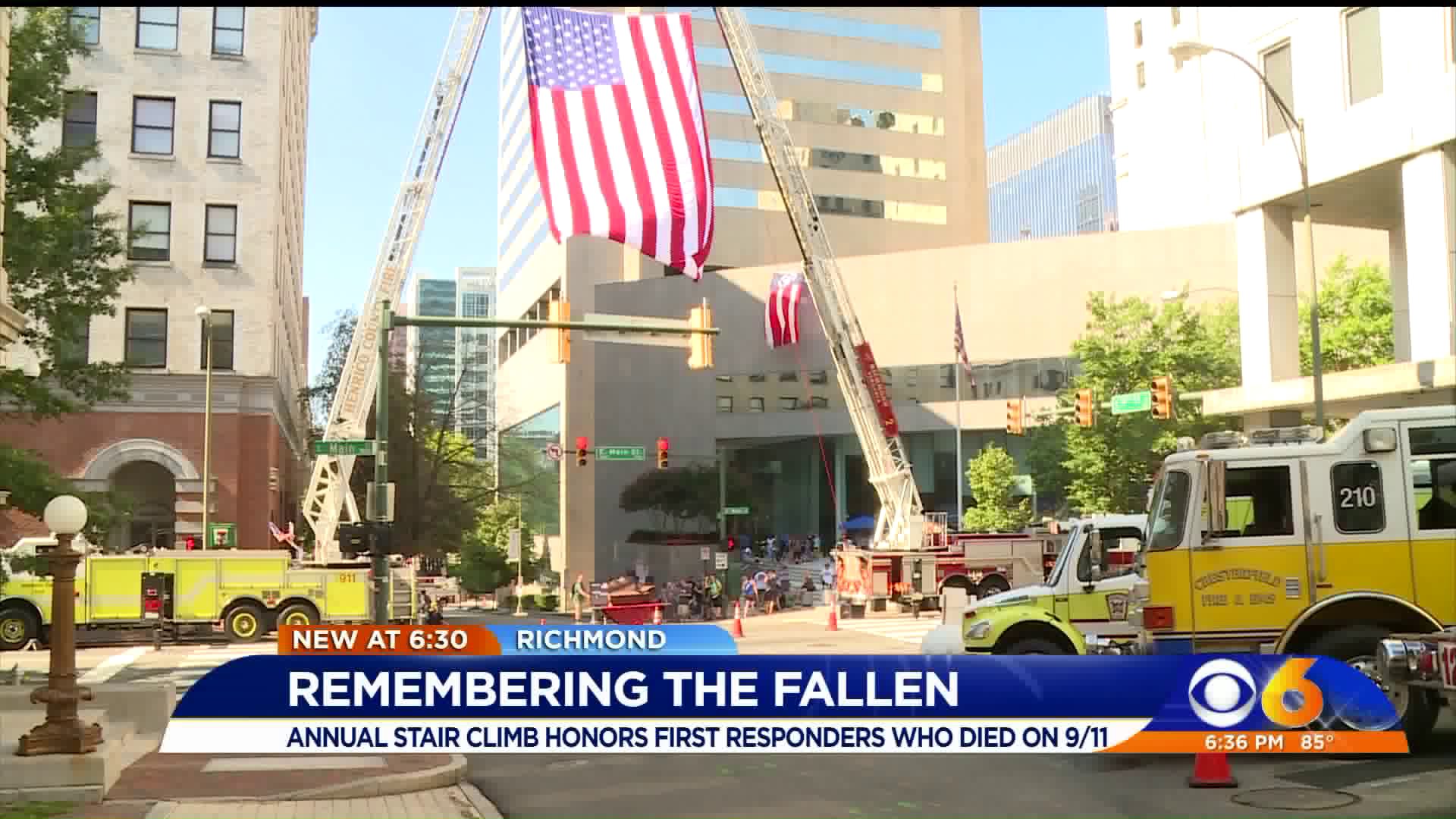 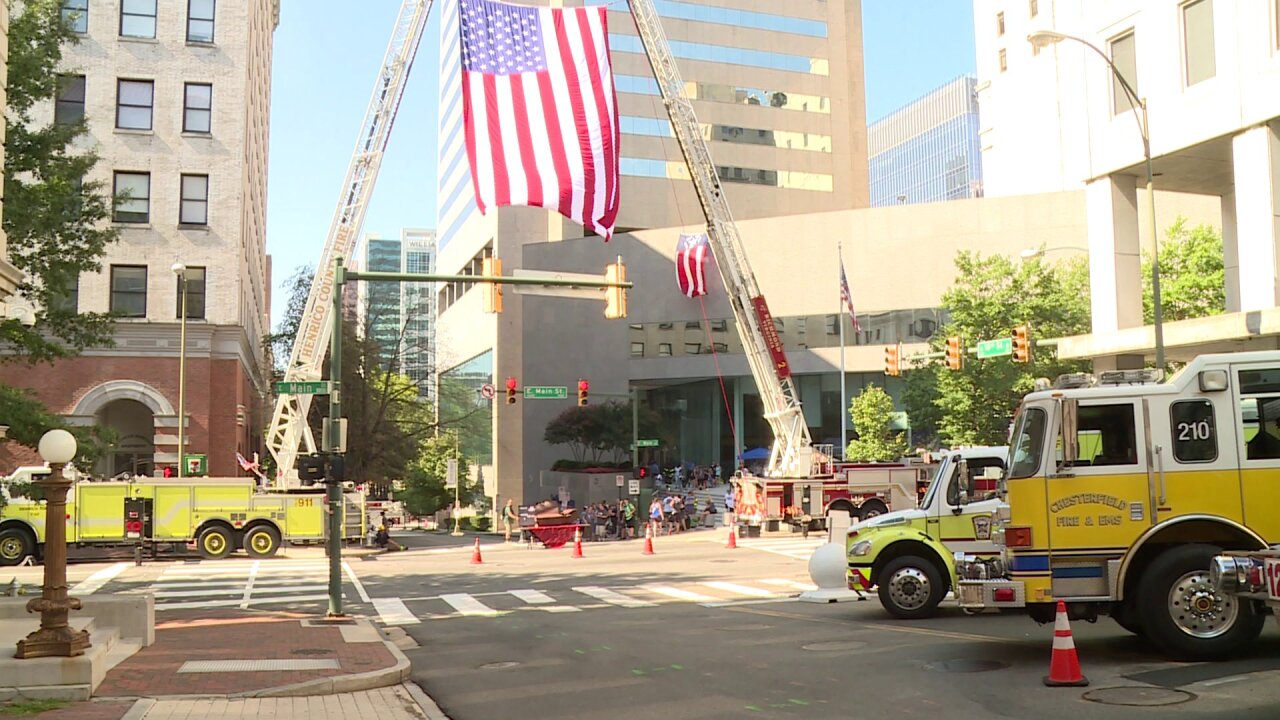 RICHMOND, Va. -- First responders from across Virginia made their way to Richmond Sunday to pay tribute to their brothers and sisters killed in the attacks on Sept. 11, 2001.

More than 450 people signed up for the 9th annual Richmond 9/11 Memorial Stair Climb to trek up 22 flights of stairs five times in honor of the first responders who climbed the 110-story Twin Towers at the World Trade Center.

"It's an opportunity for people to come and to have a place and to do something and... not just to think about the day and let it pass," Lt. Mike Oprandi with Richmond Fire Department said. "This is actually something where people can come and get a feel for what those guys went through that day."

Susan Glazier, who attended the event in support of her sister and a family friend, said first responders should be lauded for their service.

"Firefighters, EMS, where we run from danger, they run to the danger," Glazier said. "Sometimes we take it for granted, these guys just went to work and lost their lives... It's surreal what they give."

Glazier said the firefighters killed on Sept. 11 should be remembered daily, and not just on the anniversary, by thanking first responders.

"So it's important that we, for me and my family, to make sure that they know they are supported and loved for what they do," Glazier added.

Oprandi said he was contended by the strong turnout for the event.

"Here we are on the eve of 18 years," Oprandi said. "Hundreds of people from around Virginia are gathered here to memorialize that day and to remember the first responders." 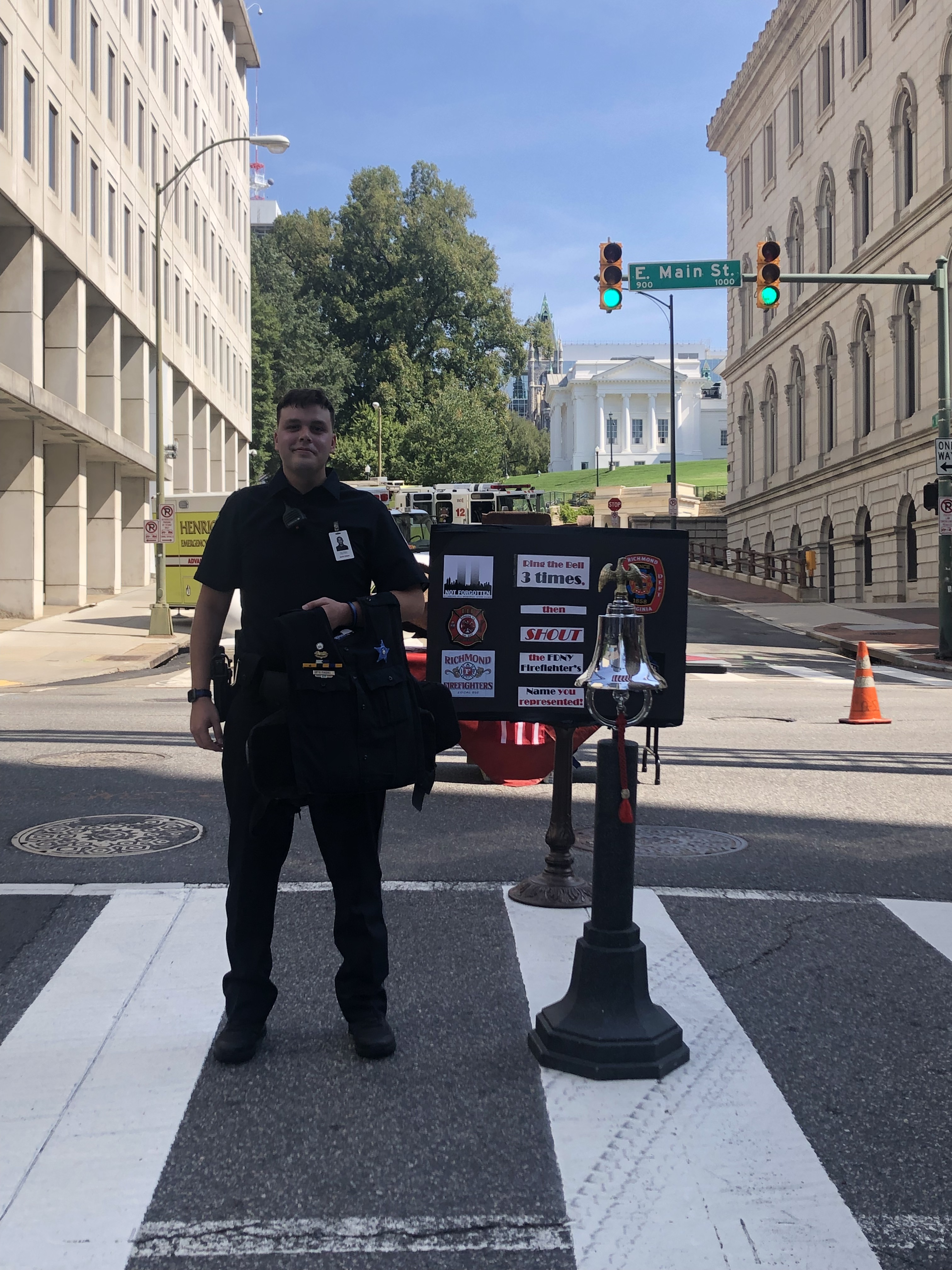 The Victims:
At the World Trade Center (WTC) site in Lower Manhattan, 2,753 people were killed when hijacked American Airlines Flight 11 and United Airlines Flight 175 were intentionally crashed into the north and south towers, or as a result of the crashes.

The victims ranged in age from two to 85 years. Approximately 75-80% of the victims were men.

At the Pentagon in Washington, 184 people were killed when hijacked American Airlines Flight 77 crashed into the building.

Near Shanksville, Pennsylvania, 40 passengers and crew members aboard United Airlines Flight 93 died when the plane crashed into a field. It is believed that the hijackers crashed the plane in that location, rather than their unknown target, after the passengers and crew attempted to retake control of the flight deck.

December 13, 2001 - The US government releases a tape in which Osama bin Laden takes responsibility for the attacks.

December 18, 2001 - Congress approves a measure to allow the president to designate September 11 as "Patriot Day" on each anniversary of the attacks.

December 2001-June 15, 2004 - The original Victims Compensation Fund processes death and injury claims from families and relatives of September 11 victims. Families of those killed had until December 22, 2003, to apply for compensation. The fund reopens in 2011.

May 24, 2007 - The Chief Medical Examiner of New York City, Dr. Charles S. Hirsch, rules that the death of Felicia Dunn-Jones in 2002, from dust exposure, is directly linked to the 9/11 attack and therefore a homicide.

January 2009 - The medical examiner's office rules that Leon Heyward, who died the previous year of lymphoma and lung disease, is a homicide victim because he was caught in the toxic dust cloud just after the towers collapsed.

June 17, 2011 - The New York medical examiner rules that Jerry Borg's death on December 15, 2010, is a result of inhaling toxic substances from the dust cloud generated by the collapsing twin towers.

May 10, 2014 - The unidentified remains of those killed in the attacks are returned to the World Trade Center site where they will be kept in a repository under the jurisdiction of the Office of Chief Medical Examiner of the City of New York.

August 7, 2017 - The New York City medical examiner's office announces that the remains of a man killed at the World Trade Center are positively identified due to more sophisticated DNA testing being available.

The reopened and expanded fund has operated since January 2, 2011. Information on total awards is updated regularly and posted here.

Families who agreed to get compensation from the federal fund agreed not to sue the airlines.

$123 billion - Estimated economic loss during the first 2-4 weeks after the World Trade Center towers collapsed in New York City, as well as decline in airline travel over the next few years.

$40 billion - Value of the emergency anti-terrorism package approved by the US Congress on September 14, 2001.

$15 billion - Aid package passed by Congress to bail out the airlines.

It took 3.1 million hours of labor to clean up 1.8 million tons of debris.

The total cost of cleanup was $750 million.

It merged 22 governmental agencies into one, including the Customs Service, the Immigration and Naturalization Service, the US Coast Guard and the Federal Emergency Management Agency.

Through the Container Security Initiative, over 80% of imported maritime containerized cargo is prescreened before entering the US.