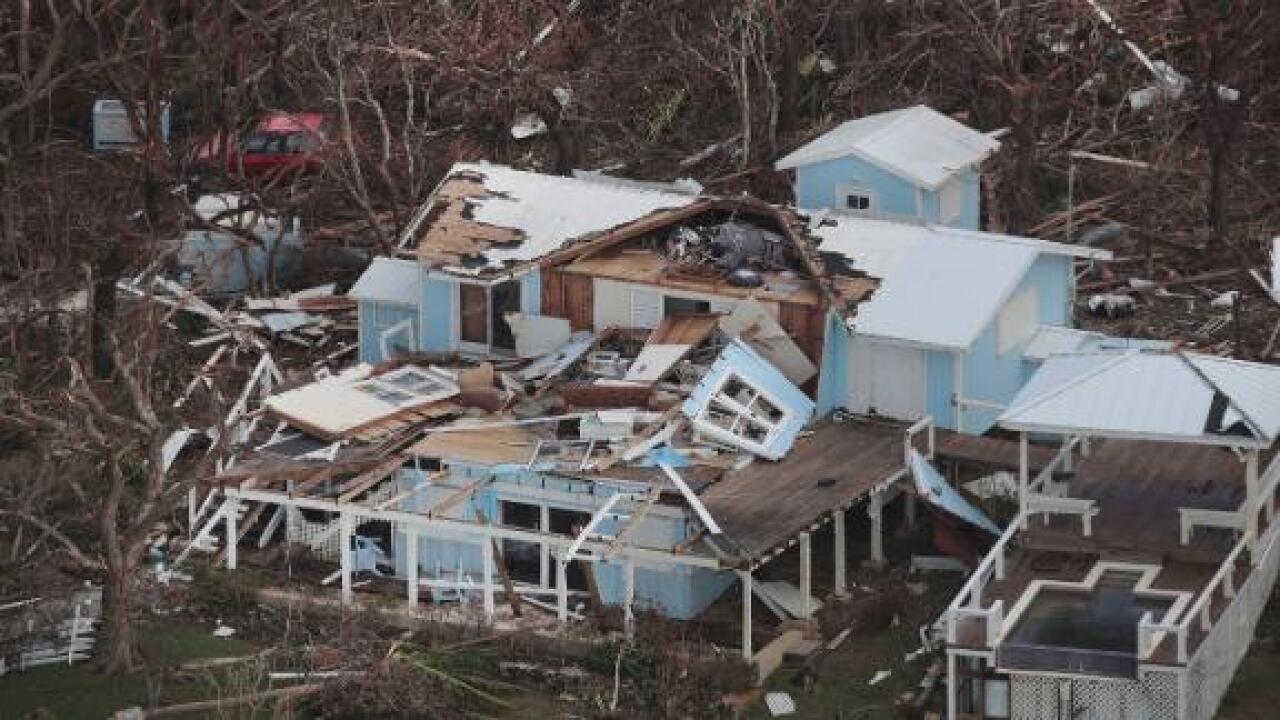 GREAT ABACO, BAHAMAS – SEPTEMBER 04: An aerial view of damage caused by Hurricane Dorian is seen on Great Abaco Island on September 4, 2019 in Great Abaco, Bahamas. A massive rescue effort is underway after Hurricane Dorian spent more than a day inching over the Bahamas, killing at least seven as entire communities were flattened, roads washed out and hospitals and airports swamped by several feet of water, according to published reports. (Photo by Scott Olson/Getty Images)

At least 100 people have been rescued as small planes and helicopters hopscotch the Bahamas’ northern islands as part of international efforts to reach stranded survivors, feed the displaced and further assess apocalyptic damage left by Hurricane Dorian.

“Our emergent priority is to get the critically wounded out and help the government of the Bahamas get the infrastructure back up so it’s safe, sanitary and livable — at least on a temporary basis — for those folks,” Capt. James Passarelli, chief of staff of the US Coast Guard’s 7th District, told CNN on Thursday.

Also helping survivors on the hard-hit Abaco Islands and Grand Bahama are teams from Los Angeles and Fairfax, Virginia, the US Agency for International Development said.

A British naval vessel has joined the effort, distributing food and water, and clearing streets of debris, Bahamian Minister of National Security Marvin Dames said Wednesday. About 60,000 people may be in dire need of food relief, the World Food Programme has said.

Dorian, the strongest hurricane ever to hit the Bahamas, wiped out whole neighborhoods, then lingered for days, pounding the same battered places again and again.

Though the storm targeted only a small section the Bahamas — a nation of more than 700 islands — it still inflicted “generational devastation,” Bahamian Prime Minister Hubert Minnis said.

As authorities launched search and rescue efforts, Dorian’s death toll jumped Wednesday from seven to 20, officials said. The grim tally is expected to rise more as the extent of the damage becomes clear over the next few days, Minnis said.

At least 80 people had been rescued and evacuated Thursday morning from the Abacos, a government official told CNN. Many were flown to the Odyssey Aviation center outside Nassau Airport, where a CNN team saw rescue and relief aid helicopters and small planes landing and taking off.

The US Coast Guard had rescued more than 135 people in the Bahamas as of Thursday morning, officials said. It was not immediately clear whether the Abacos and Coast Guard tallies overlapped.

“Most of the operations to date have been relocating and transporting the critically injured to a higher level of medical care,” Passarelli, the Coast Guard official, said.

Many of those rescued were taken to Nassau, he said.

Resources have been cut off

As authorities rushed to respond to the damage, they have come up against limited access to important resources.

The only international airport on the island of Grand Bahama was devastated and cannot serve as a staging ground for medical evacuations or emergency aid deliveries.

“After two days of trying, we’re finally able to get into the Freeport airport,” CNN’s Patrick Oppmann said from the scene Wednesday.

“It’s gone. … The level of devastation is actually breathtaking. There are no walls left at the airport. The ceiling has come crashing.”

The runway was littered with debris. Inside the domestic terminal, the wreckage of a small passenger plane lay among the detritus.

“You think of the force required to throw a plane from the runway into a terminal,” Oppmann said. “If anybody was in here, I don’t know how they would have survived.”

The international terminal was still standing but had suffered obvious damage from flooding, according to CNN’s crew.

By Thursday morning, debris had been removed from the runway, residents told Oppmann, but it was unclear whether the airport was back in use.

Flooding has also limited access to health care, blocking for a time the path to one hospital with submerged cars.

Volunteers wade through the flood

Before foreign aid could reach the islands, local volunteers were on the scene and braving the harsh conditions to save others.

As they struggled through floodwaters and debris, volunteers like Rochenel Daniel worked to help those impacted by the prolonged storm.

“Some people, they were exhausted. Some we had to carry,” Daniel said. “Some couldn’t even make it.”

Freeport resident Harold Williams and his son went out on a Jet Ski to get stranded relatives who waded out to them in chest-deep waters.

“I don’t think we’ve seen anything like this in our lifetime,” Williams said. “Total destruction.”

‘You can’t tell that there are any homes there’

Even new homes built under more stringent building codes were destroyed, said Brandon Clement, who shot footage of the destruction from a helicopter.

One older neighborhood was wiped out, he said.

“You can’t tell that there are any homes there,” he said. “It looks like a bunch of building materials were put in a big grinder and thrown on the ground.”

The Abacos suffered massive destruction, the Prime Minister said, with 60% of homes in the town of Marsh Harbor damaged.

“There are no words to convey the grief we feel for our fellow Bahamians in the Abacos and Grand Bahama,” Dionisio D’Aguilar, minister of tourism and aviation, said Wednesday in a statement.

Hotels on the Abaco and Grand Bahama islands are closed, the tourism ministry said. Most of the Bahamas’ other islands are open for tourists.