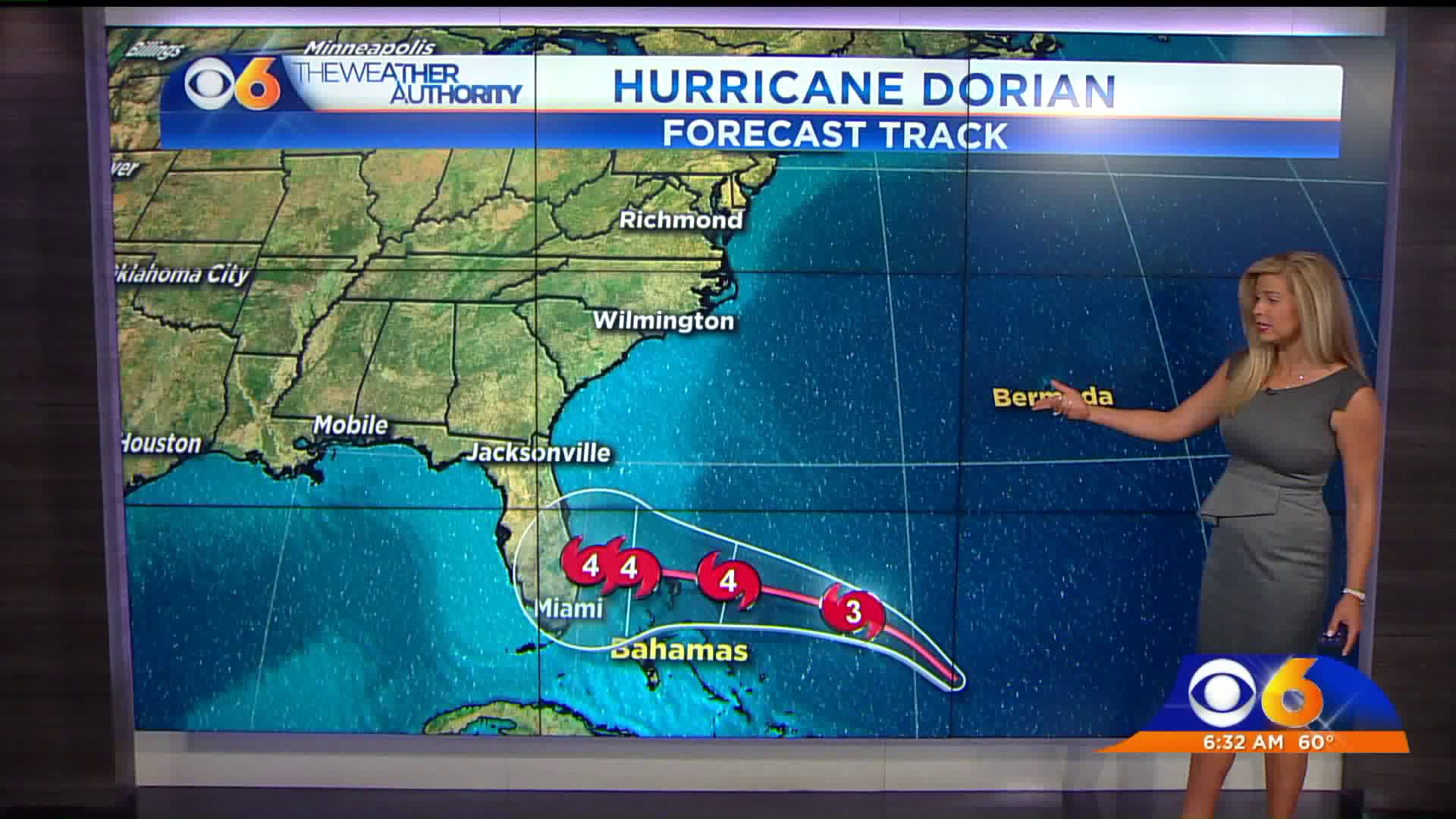 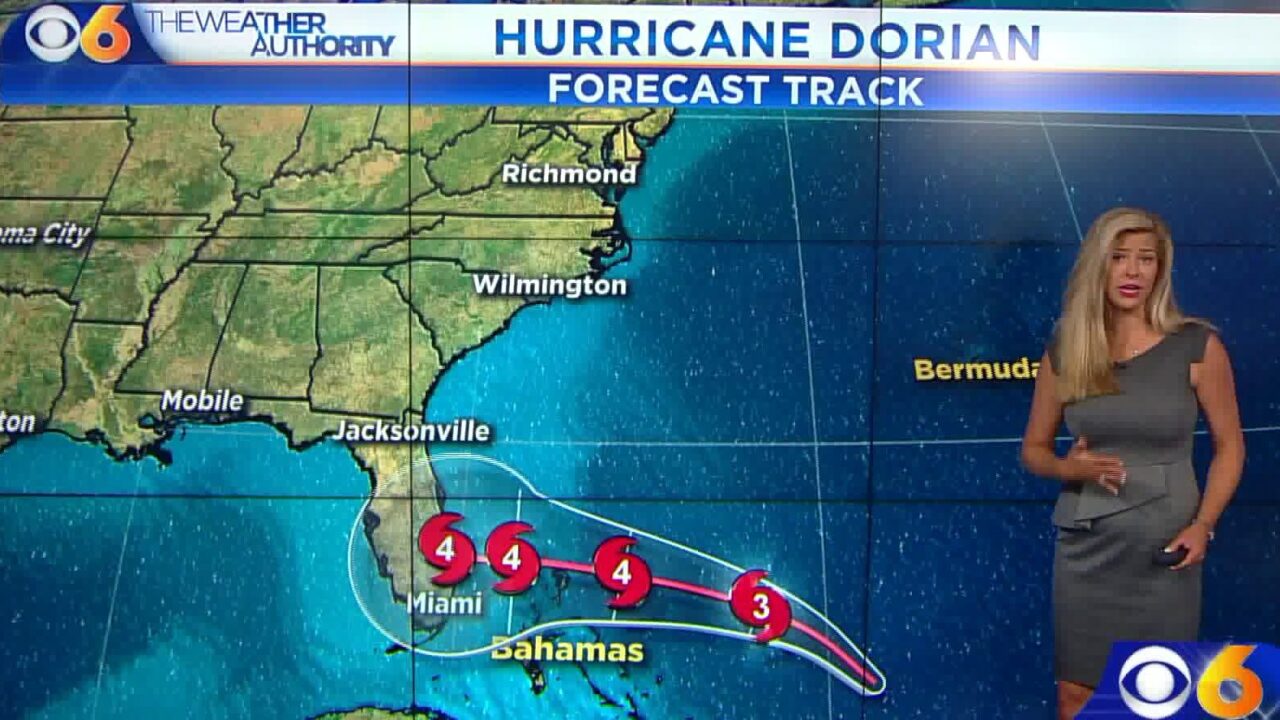 MIAMI -- All of Florida is under a state of emergency and authorities are urging residents to stockpile a week's worth of food and supplies as Hurricane Dorian gathers strength and aims to slam the state as soon as Monday as a Category 4 storm.

"If you're anywhere on that east coast of Florida, you want to have food, water, medicine for up to seven days," Gov. Ron DeSantis said Thursday.

Dorian, now a Category 2 hurricane with sustained winds of 105 mph, is due to slow in the coming days, gaining intensity over warm Caribbean waters to fuel the heavy rains, damaging wind and storm surge it's expected to deliver, CNN meteorologist Derek Van Dam said.

Hurricane watches have been issued for the northwestern Bahamas, where Dorian is expected to hit Sunday as a Category 3 storm, the National Hurricane Center said.

Hurricane Dorian is anticipated to make a #LaborDay landfall as a category 4 (winds 130-156 mph). This would be the strongest hurricane to hit the Florida's East Coast since #Hurricane Andrew in 1992. @CBS6 #Floridians pic.twitter.com/X74skxZHXj

It is then forecast to roar toward the US mainland Monday evening into Tuesday morning at major-hurricane strength, though experts warn that forecasts are subject to change.

"There is a wide cone of uncertainty of the storm, especially since it is still days from landfall on Florida," CNN meteorologist Rob Shackelford said. The cone extends from Key West up to around Jacksonville, a distance of 500 miles, he added.

"This is going to be a big storm. We're prepared for a big response," he said.

Since Dorian had minimal impact on Puerto Rico, the agency is shifting staff from the island to Florida in preparation.

Dorian already has claimed the title of strongest storm so far of this year's Atlantic hurricane season.

If it reaches Florida, this will be the fourth year in a row a hurricane of any strength has hit the state. That would be the most years in a row since the 1940s.

And if it reaches Florida as a Category 4 storm, with sustained winds of around 130 mph, it would be the strongest hurricane to strike Florida's east coast since Hurricane Andrew in 1992, CNN Meteorologist Brandon Miller said.

Florida residents are stocking up

DeSantis declared a state of emergency for all 67 Florida counties. The state has 819,000 gallons of water and 1.8 million meals ready for distribution, he said.

Florida residents have been stocking up on gas and food for a stormy weekend, and officials are urging those in the state to be prepared.

"Get water, get gas, get cash out of the ATMs," West Palm Beach Mayor Keith James said. "The more we hear about this storm, it sounds like a serious one."

With Dorian scheduled to arrive in time for Labor Day weekend, major airlines have offered waivers for flights to Florida, Georgia and the Caribbean. And tourist areas were emptying out Thursday, CNN affiliate WFLA reported.

"We usually get hundreds of visitors every day, and it's just been one of those days that drives everyone away. It's a gorgeous day but the hurricane is just going to kill it all," Jason Pun, owner of a Cocoa Beach restaurant, told the station.

"It is taking a little bit of a hindrance, especially when we're supposed to be preparing for one of our busiest weekends of the year," Frank Figueroa, owner of the neighboring Sandbar, said.

Military and NASA are making adjustments

To avoid damage from Dorian, the US Navy is moving more than 40 planes from Jacksonville to bases in Michigan, Ohio and Texas.

Florida State University had been scheduled to play its season-opening game off campus, in Jacksonville near the Atlantic coast. But because Dorian will be approaching, the game has been moved farther inland to FSU's normal home field in Tallahassee.

Because Dorian could impact Florida's Kennedy Space Center, NASA has said it will have a crawler-transporter move NASA's mobile launcher Friday from launch pad 39B to the Vehicle Assembly Building about 3.5 miles away. The launcher was being tested on the pad in anticipation of future Space Launch System missions.