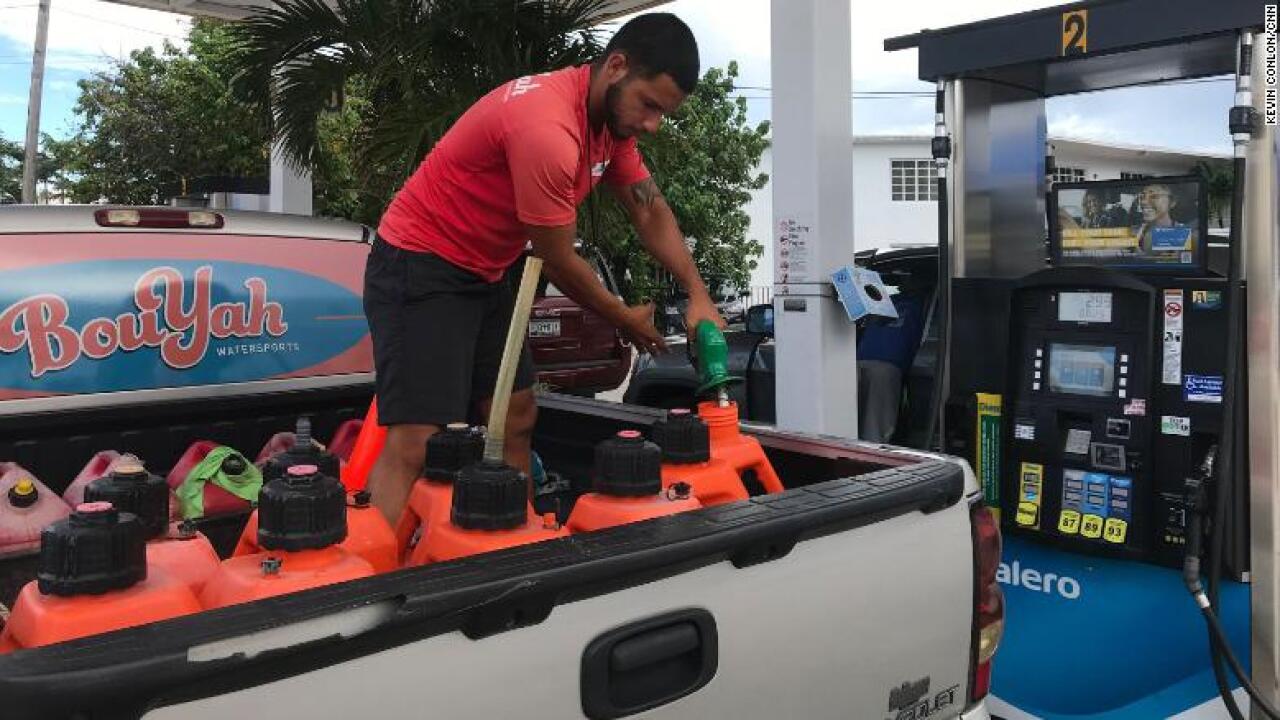 A parked car sits at a gas station that has run out of fuel in Miami.

Some Florida residents are leaving their cars at gas stations because fuel is running out before Hurricane Dorian arrives in the state.

Miami resident Marion Wilkinson Scott told CNN on Friday he saw 12 cars that were left Thursday night at a Chevron on 152nd Street, five at a Mobile station in the Hammocks and two at another Chevron across from his house.

He posted on Twitter a picture of one of those cars with a note on the dash: “I live close by. My car is out of gas. Please call me when more arrives!” A phone number was included.

I'm seeing this all over S. Flo… cars left over night at the gas station. Letter on the dash says:

There won't be more gas at this station today. 🙁#Dorianflorida #Dorian pic.twitter.com/5NQ95J6J0a

“My friends have given similar reports from various places in the city. I think a lot of people were in denial about this storm. Now they are a bit panicky,” Scott told CNN.

He said he tried to top off his own tank at all those stations Thursday but had no luck.

“There isn’t any. We’ve kept it topped off every night since last week (because Irma was a similar scenario for fuel scarcity two years ago). That ended last night when the stations all ran out of gasoline,” he said.

“As a result, we have one unused car with a tank and another with half a tank. I hope it’s enough to last til Tuesday next week. The possibilities of landfall are so broad that the entire eastern seaboard of Florida has made a run on gas simultaneously.”

“We stocked up last week when it was a tropical storm and have reservations for a hurricane-proof hotel with a generator in Bonita Springs,” he said.

“I have two little girls. I don’t need for them to be in the heat once the electricity goes. We have shutters on our home. I’m glad we filled or tanks last week and have provisions. It is difficult to heed warnings when there is no gas at the station and no water in the market. Our tub will be filled.”

He says his daughters have already excitedly packed their favorite toys in backpacks for the trip across state.

They’re taking other measures, too. “We are people of faith. We went to the church to pray,” Scott said.

Other parts of Miami also have been affected by the gas shortage.

The Shell on 41st Street, a main thoroughfare through Miami Beach, ran out of gas at about 10 p.m. Thursday, according to Harry, an employee who declined to give his last name. Asked when they’d be getting a delivery, he said, “We have no idea. The distributor has no idea.”

Stations in several parts of Florida are running out of gas before Hurricane Dorian arrives.

A few blocks south, there was a slightly chaotic scene Friday morning at the Valero on 23rd Street, where a dozen cars lined up for gas while the station still had it. Mathew Cabral filled about a dozen canisters with diesel, but not for his own use. He works for a rental company that stocks Miami Beach with chairs, cabanas and other tourist items and he and his coworkers were spending the morning getting their inventory off the beach.

When asked if he was nervous about the incoming storm, he said, “No, not really, not at Category 3. But if it’s a Category 4, well, that’s a bit different.”

People in other parts of Florida posted videos on social media of long lines of cars waiting to get into gas stations.

Dango Kumwenda, 24, who lives in Windermere, Florida, told CNN he waited in line for almost two hours to get gas at a Wawa station in Winter Garden.

“This was probably the only gas station within like a 10-mile radius with gas,” he told CNN.

Waited in line for almost 2 hours to pump some gas last night 🤣 Hurricane Dorian reminding me of Bingu days 😂 pic.twitter.com/KsVIQj40Vf

Florida Gov. Ron DeSantis acknowledged that there is a fuel shortage across the state as Hurricane Dorian approaches.

But steps are being taken to fix this issue, he said.