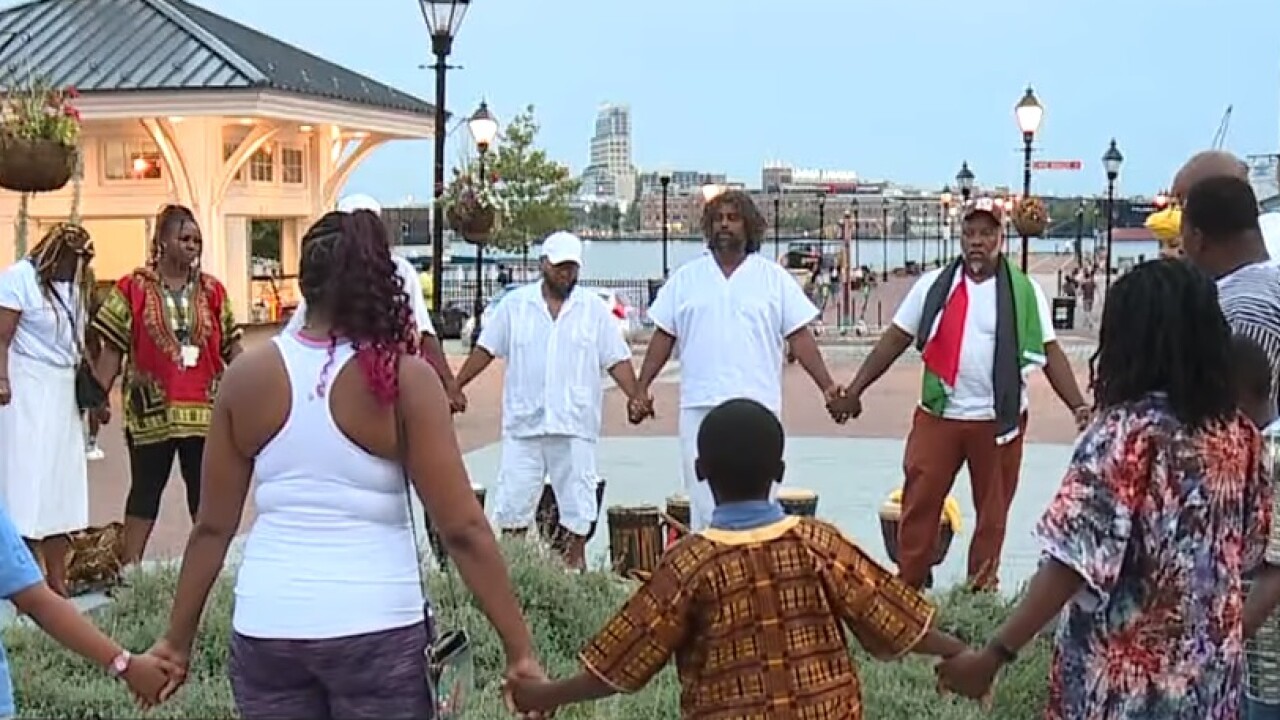 BALTIMORE — Derrick Chase couldn’t help but smile as he sat at the end of a line of African Americans playing drums in unison.

“The drum is the foundation of us as people, so whenever we gather we’re gathered by the drum,” Chase told WMAR.

Next to him a young boy using a rain stick, all the people in the line dressed in traditional African garb.

In front of them people dancing and singing, a far cry from the world their ancestors found when they were brought to the harbor at Fells Point.

The bars and restaurants that now line the streets were spaces where slaves were shackled and sold.

Tuesday night, 400 years ago to the day, from when Chase said the first slaves from Africa came to Virginia.

“The first Africans came to America in the holes of ships to begin what would be the sojourn of making what we call America into America,” said Chase.

Michael Scott said the event is a part of a movement across the country to commemorate a path that still has a long way to go, including an effort by the United Nations.

“The Ports Marking Project commemorates Ports of Call for the Transatlantic Slave Trade all over the world,” said Scott. “Places where they started and disembarked, Baltimore was one of those ports.”’

Over 400 years from slavery to Jim Crow, and now still facing oppression and injustice.

“Baltimore was the industrial capital so a lot of the labor of the African Slaves were organized around here,” Chase said. “It was this place called Baltimore that helped turn America into the super power that she eventually would become.”

Nneka Nnamdi said that part of the healing from the injustice is learning more about the past.

“We hope that people, our people specifically really begin to learn the history of African people prior to the colonial period and prior to enslavement because it helps to inform what we need to be doing in the work today,” Nnamdi said.

Nnamdi encourages people to look into their lineage and to not let the dismantling of their ancestors stop them from finding out their truth.

They ended the night when the group put offerings into the water for the spirits of the Africans that didn’t survive the journey.