Instead of trip to Disney World, 7-year-old chose to meet bone marrow donor 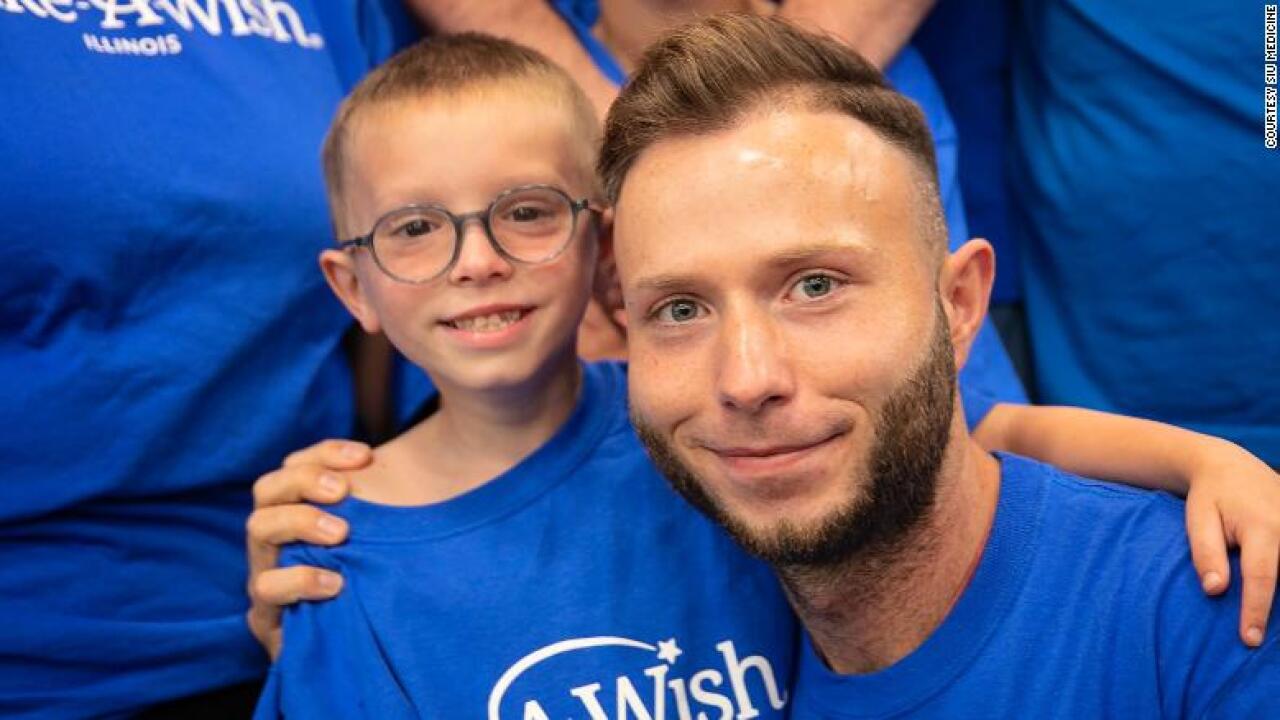 Six years after a stranger gave him bone marrow for a transplant, Gabriel Smith, 7, is getting the chance to meet his donor. But to make it happen, Gabriel had to decide to give up something big.

Gabriel was diagnosed as an infant with aplastic anemia. Doctors discovered he had bone marrow failure and needed a transplant, his mother told CNN.

Luckily, a match was waiting halfway around the world.

Dennis Gutt, 25, is a carpenter from the German town of Schuby. He learned of Be The Match — an organization with the largest bone marrow registry in the world — on the internet and decided to register.

“I think it’s natural that every person who can help should do this,” Gutt told CNN.

Having just met at the airport, Gabriel and Gutt host an awareness event for bone marrow donor registry, Be the Match, at SIU School of Medicine.

When Gutt learned of a recipient in need of a bone marrow transplant, he immediately agreed to help. Collecting the bone marrow was a normal operation, and Gutt he didn’t run into any issues, he said. Then, he went on with his life, not knowing what happened with his donation.

Years later, Gabriel’s mom, Lauren Smith, contacted Gutt through Facebook. Both parties had agreed to share their identities, and Lauren and her husband, Aaron, exchanged messages with Gutt, along with photos of Gabriel.

“I was speechless,” Gutt said of learning of the results of his donation. “I can’t believe that this happened and that he survived the bone marrow transplant.”

The Make-A-Wish Foundation, which grants wishes to children with life-threatening or terminal illnesses, approached the Smith family last year about granting a wish to Gabriel, Lauren Smith said.

Gabriel and his family share their story with the team at SIU School of Medicine.

“At first, he said, ‘Take my donor to meet Mickey,'” she told CNN. “But we couldn’t do that, so he was asked to choose one: Meet your donor or go to Disney. He chose to meet his donor, Dennis, without any hesitation.”

The foundation arranged for Gutt to travel this month to the United States for the first time and to meet the Smiths, who live in Springfield, Illinois.

“Gabriel’s bone marrow transplant forever connected him to a stranger halfway around the world, and our hope is that by uniting Gabriel and Dennis, we were able to help Gabriel build the physical and emotional strength needed to put his critical illness behind him,” Make-A-Wish America President and CEO Richard K. Davis told CNN.

“He is part of our family now,” Smith said. “He bonded instantly with Gabriel and our other two kids, Ebby and Xavier. We are hoping this experience will inspire others to donate blood and join the Be The Match registry.”