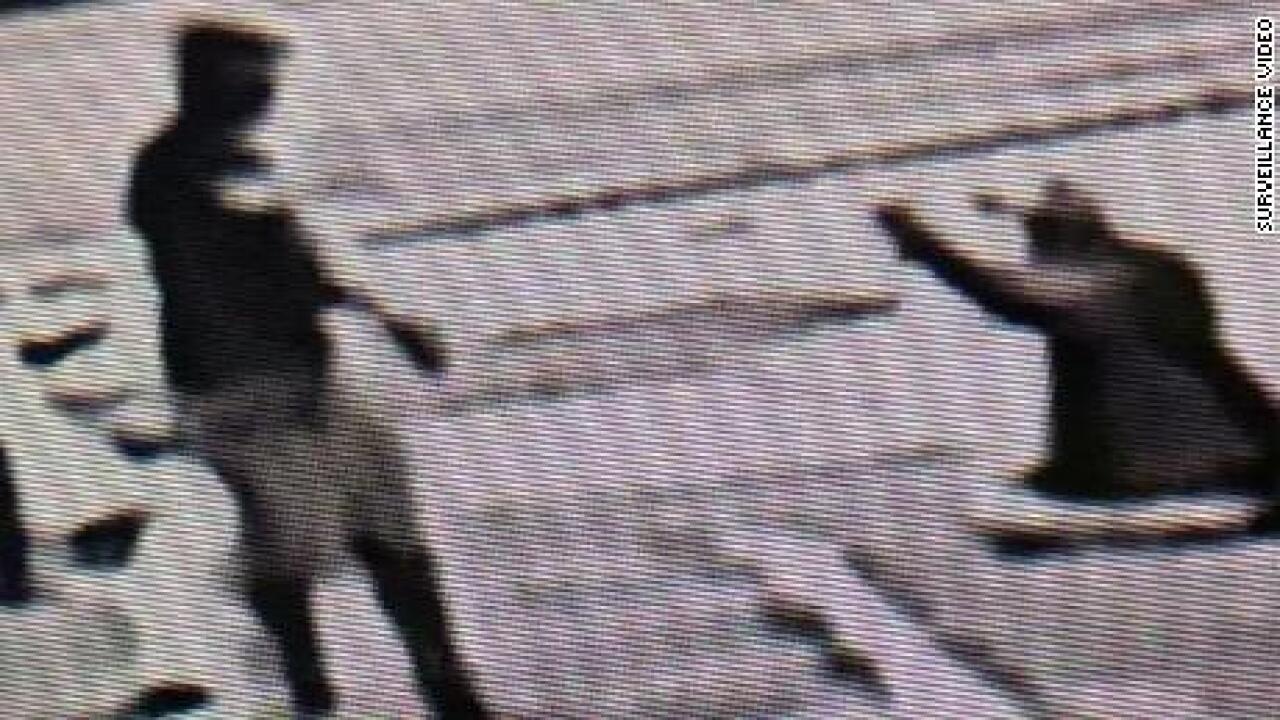 CLEARWATER, Fla. — After he shot an unarmed black man outside a convenience store in Florida, Michael Drejka told police that he only fired after the man shoved him to the ground and then ran at him.

But surveillance video of the shooting contradicts him and shows the man, Markeis McGlockton, taking several steps back in the moments before the fatal shot — a point police have challenged Drejka on.

“What happens if I told you that I looked at the video and at no time and point does he come running up toward you. He actually takes a step back,” the officer, Det. Richard Redman, says in an interview with Drejka on the day of the shooting last year.

“I would disagree,” Drejka responded.

Video of that police interview, including Drejka’s reenactment of the shooting, played in court Thursday as part of Drejka’s manslaughter trial for killing McGlockton last July 19 in Clearwater, Florida. His attorney said the killing was in self-defense after Drejka was threatened and then shoved to the ground.

The deadly incident began when Drejka confronted and began yelling at McGlockton’s girlfriend, Britany Jacobs, who was parked with two of her children in a handicap-accessible spot outside a Circle A food store. As their argument escalated, McGlockton came from inside the store and forcibly shoved Drejka, who fell to the ground.

Drejka then pulled out his gun and fired at McGlockton, who had taken several steps back, the surveillance video shows.

In opening statements, defense attorney Bryant Camareno argued that Drejka’s comments to police were simply his best recollection of what happened and showed his perception at the time.

“He wasn’t lying, he was remembering the best that he could from the impact that he sustained,” Camareno said.

‘I shoot to save my own ass’

Drejka’s attorneys are no longer arguing that he should be immune to prosecution because of “stand your ground,” but Drejka mentioned the law at the end of his interview with police.

“(Unclear) the ‘stand your ground’ thing, and I did exactly what I thought I was supposed to be doing at that time considering what was happening to myself,” he said.

In the police interview, Drejka got down on the ground to reenact the moments of the fatal shooting. He said that he was shoved from the side and thought McGlockton was going to start kicking him and beating him.

“If he was going to hit me that hard to begin with, a blind side from the get-go, what else should I expect?” Drejka said.

Police questioned him several times on the discrepancy between the video and his statements that McGlockton took steps toward him.

“That is exactly what I saw,” Drejka insisted.

In addition, he said he fired just one shot to “neutralize” what he saw as a threat.

“I shoot to save my own ass, and that’s that,” Drejka said in the interview.