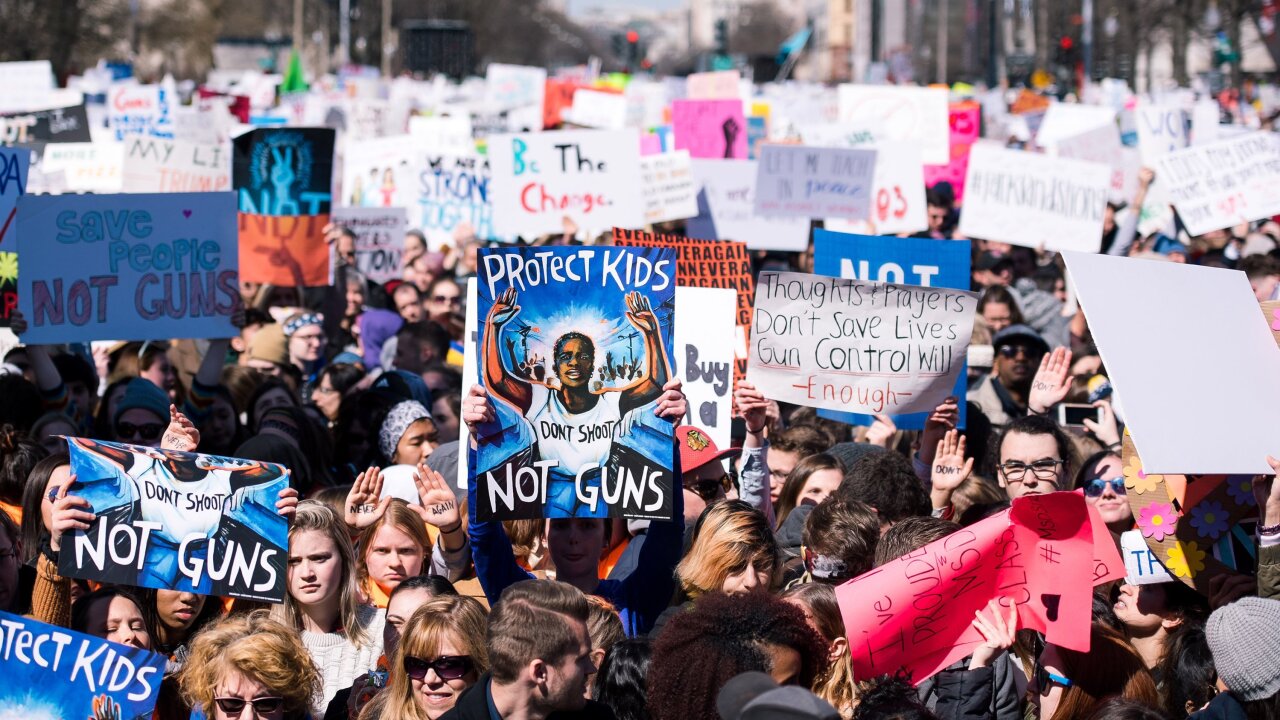 March for Our Lives, the student-led movement focused on gun violence prevention that emerged from the 2018 Parkland, Florida, school shooting, has a new platform that it wants 2020 presidential candidates to endorse.

March for Our Lives, the student-led movement focused on gun violence prevention that emerged from the 2018 Parkland, Florida, school shooting, has a new platform that it wants 2020 presidential candidates to endorse.

The Peace Plan for a Safe America is wide-ranging six-point plan that uses the acronym CHANGE to list policy solutions for alleviating gun violence.

“Gun violence is destroying our generation. This is simply unacceptable. That’s why, as survivors and students of March For Our Lives, we believe it’s time for a Peace Plan for a Safer America,” the group says in its executive summary.

The plan includes familiar gun control measures as well as novel approaches to scrutinizing the gun lobby and a new role within the administration focused entirely on gun violence prevention. It calls on “the next Presidential Administration and Congress” to adopt its proposals to address what it calls a “national gun violence epidemic.”

“The next President must act with a fierce urgency to call this crisis what it is: a national public health emergency. They must acknowledge that the level of gun violence in the U.S. is unprecedented for a developed nation — and only bold, new solutions can move the needle on the rates of gun injuries and deaths.”

Here’s an overview of what the plan entails:

1. Change the standards of gun ownership

The first prong of the plan calls for legislation that would “raise the national standard for gun ownership” through several mechanisms, including a national licensing and registry system; a ban on assault-style weapons and high-capacity magazines; policies to disarm gun owners who pose a risk to themselves or others; and a national gun buy-back program.

The plan calls for an “an urgent and comprehensive federal response” to reducing gun-related injuries by declaring a national emergency around gun violence that would “unlock executive resources and publicly underscore the urgency of the moment.”

Such resources could fund a multi-agency approach to addressing gun violence through initiatives from the Alcohol, Tobacco, Firearms, and Explosives, the Centers for Disease Control, the Department of Health & Human Services and federal agencies.

3. Accountability for the gun lobby and industry

The group calls on the federal government to “hold the gun lobby and industry accountable for decades of illegal behavior and misguided policies.”

The plan calls for a review of the 2008 Supreme Court decision in District of Columbia v. Heller, which overturned a ban on handguns in the nation’s capital and upheld the view that the Second Amendment protects an individual right to own a gun for personal use. How? By directing the Justice Department to review the decision and ensuring the next generation of federal judges appointed by the President have “a different interpretation of the Second Amendment.”

The plan also calls for the investigation of the National Rifle Association by the Federal Election Commission and the Internal Revenue Service.

It also proposes a repeal of the Protection of Lawful Commerce in Arms Act, which grants immunity to gun manufacturers.

A new position of National Director of Gun Violence Prevention would report directly to the President with the goal of coordinating federal agencies to execute the Peace Plan’s proposals.

For example, the GVP director would oversee $250 million in annual funding for gun violence prevention research by the CDC and other federal agencies and work with the Department of Justice, the Treasury Department, and the IRS to set up the federal licensing process.

Considering that gun violence takes different forms from one community to the next, the plan proposes that the GVP director would oversee the distribution of grants to state and local officials for community-based solutions.

6. Empower the next generation

The plan proposes automatically registering eligible voters and mailing voter registration cards to all Americans when they turn 18 to make it easier for the country’s youth to cast ballots.

A “Peace Corps for Violence Prevention” known as the “Safety Corps” would place young people in communities and nonprofits around the country with the goals of giving them experience in gun violence prevention and providing those nonprofits with capacity to accelerate their missions.