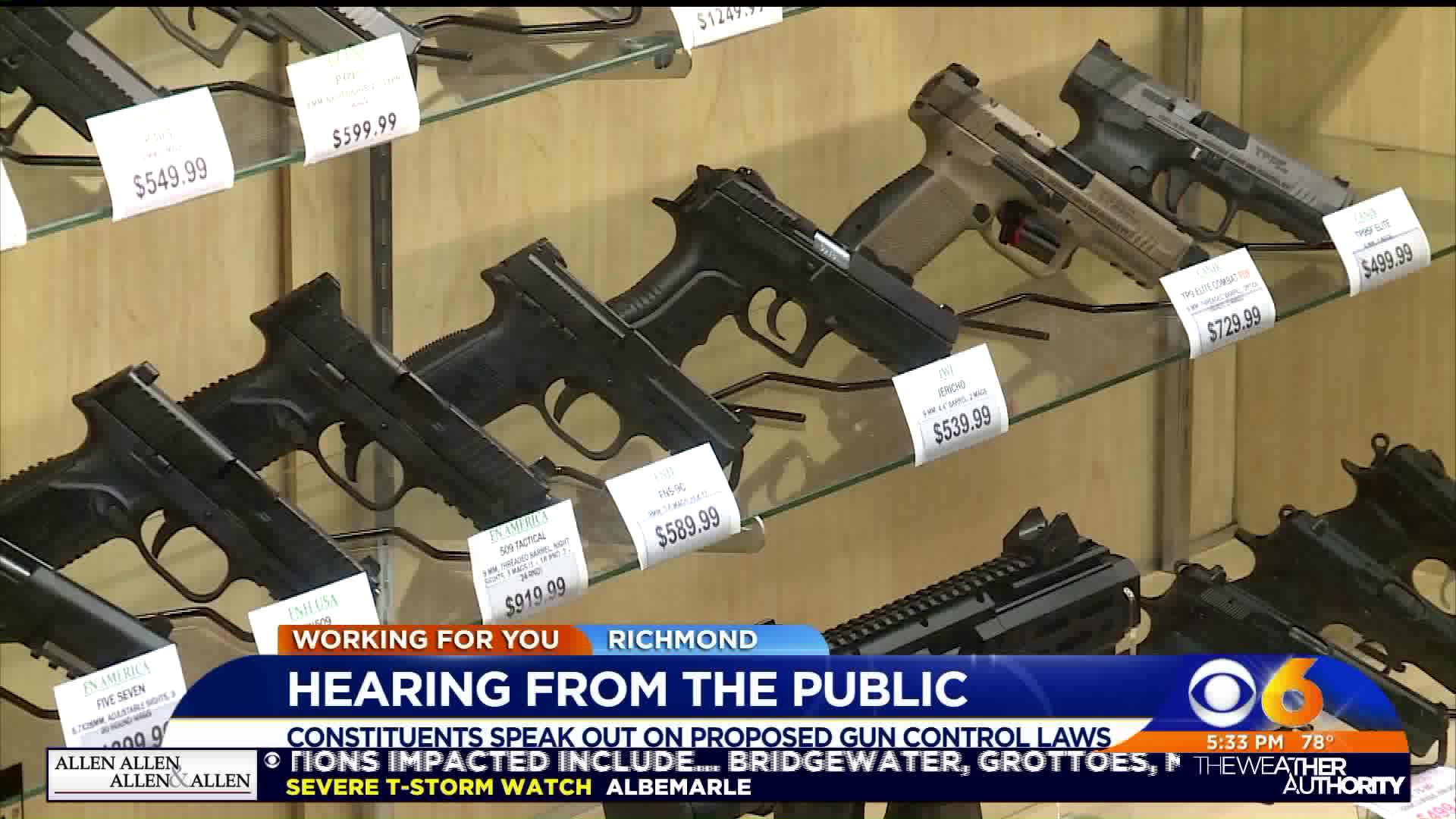 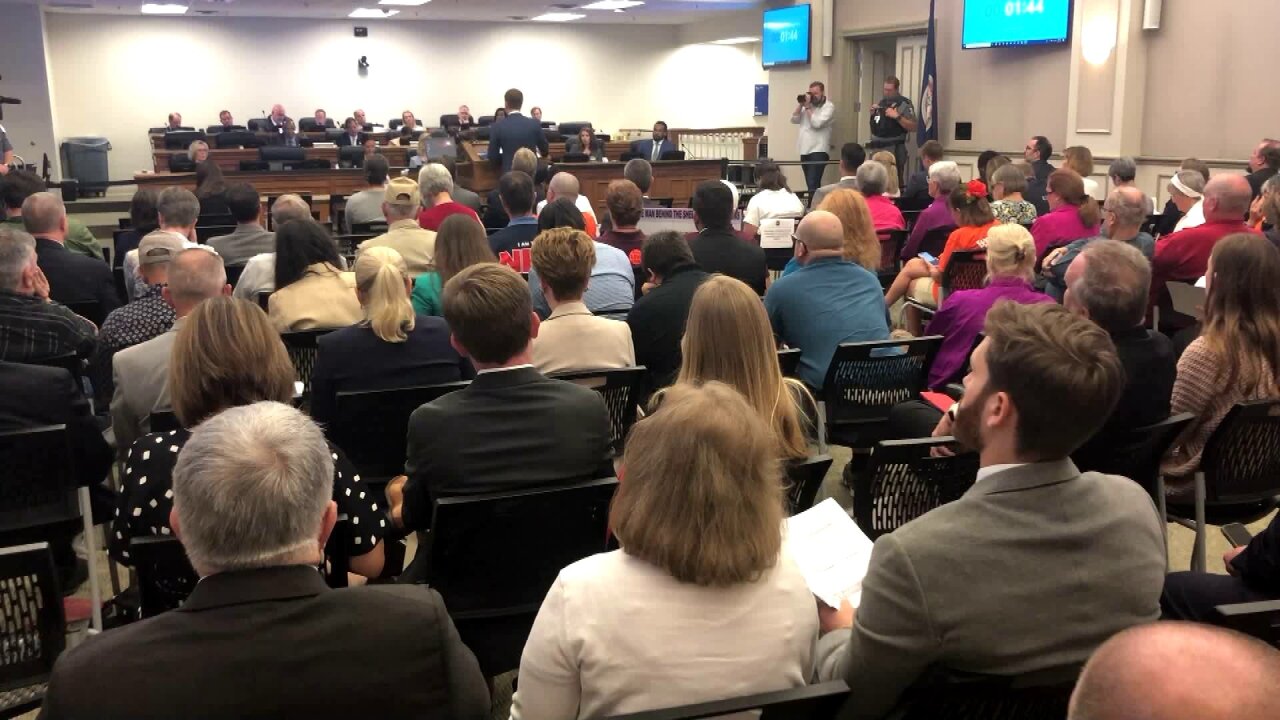 RICHMOND, Va. -- After two days and nearly a dozen hours of testimony from experts and the public, the Virginia Crime Commission is promising to continue studying gun violence policy proposals in Virginia following the mass shooting in Virginia Beach on May 31 that claimed 12 lives. Both Republicans and Democrats said the other party is taking the wrong approach in handling the issue.

During Tuesday's meeting, advocates and voters shared their take on what's at stake for Virginia families and gun owners.

Gun control proponents stressed that more than 1,000 deaths in Virginia last year involved gun violence and that state lawmakers could take simple steps to curb the illegal sale of weapons, keeping them from getting into the wrong hands. Gun rights supporters said the issue is not nearly as pressing as it is made out to be by activist groups and that a rush to limit second amendment rights would result in bad public policy that criminals would not listen to in the first place.

"Neither the United States generally or Virginia specifically are in the midst of a gun violence crisis necessitating drastic policy changes," said Amy Swearer with the Heritage Foundation. Swearer said their data shows gun ownership has increased in recent history while homicide and violent crime rates are down nationally.

Andy Goddard, who began advocating for gun control legislation after his son was shot and wounded during the mass shooting at Virginia Tech in 2007, said Virginia lawmakers have too often used a reactive approach to gun violence instead of a preventative one.

“Whether we want to call it an epidemic or not, more than 1,000 people dying [per year] where I was born would have been a total epidemic," Goddard said.

"When almost three Virginians are killed every day, that is an epidemic, that is a crisis, and we are not doing our jobs if we are not responding," said Lori Haas, a gun control activist whose daughter was wounded at Virginia Tech.

Governor Northam called the General Assembly back to Richmond following the Virginia Beach shooting to "take votes" on gun violence prevention measures, but Republican leaders adjourned after only 90 minutes.  Instead, they asked the Crime Commission to submit a report on the more than 70 gun bills submitted for the special session.  That report is expected back after the November 5th General Assembly elections, and state lawmakers do not reconvene to take action on those bills until November 18th.

Most of the conversation by the public about actual legislation Tuesday centered around strengthening Virginia's background check system, especially for person to person gun sales, extreme risk protective orders to temporarily remove any firearms from someone suffering a mental health issue, allowing cities and counties to set their own rules about guns in public places, and limiting the number of "gun-free zones."

The speakers were generally split down ideological lines between gun rights and gun control supporters.

"We need to better enforce existing law before creating new ones that have already proven ineffective," said Chris Kopacki, the Virginia Director of the NRA.

“There are problems with no clear solution, but gun violence is not one of them.  Background checks save lives," said Leanne Fox, a volunteer with Moms Demand Action.

Fox said she has lost five friends or acquaintances to suicide or homicide and said the common denominator between all of them is they involved firearms.

“We know there are solutions for gun violence. It’s our legislator's jobs to write laws that keep us safe and respect the second amendment, and they’re not doing that," Fox said.

Jay McDaniels, who lives in Petersburg, open carried his firearm while addressing the panel Tuesday.

"These laws are never going to be effective because criminals don’t follow them," McDaniels said. “Stop infringing on my rights, and do your job to protect my rights.”

"This testimony was valuable, but it could have been presented during regular committee hearings during the special session – hearings in which legislators could take the necessary and long-delayed votes on these bills. We are troubled that Republicans’ tactic to defer these bills to the Crime Commission was a strategy to ‘neutralize the conversation,’ as stated by Republican Delegate Chris Head, and it was disappointing that there was no date set as a goal for endorsement of legislation by the Commission," said House Democratic Caucus Chair Charniele Herring (D-Alexandria) and Delegate Paul Krizek (D-Fairfax).

Republican leaders said the testimony was a "thoughtful and deliberate study" that will lead to meaningful steps when the General Assembly reconvenes on Nov. 18.

"It’s disappointing that our Democrat colleagues have zeroed in on a narrow set of legislative proposals that will be ineffectual at best and counterproductive at worst,” House Majority Leader Todd Gilbert (R-Shenandoah) said in a statement. “We have learned over the last two days that the best path to keeping people safe is enforcing existing law, holding criminals accountable, strengthening our mental health systems, and using targeted intervention strategies that divert people from lives of violence.”

All 140 seats in the General Assembly are up for election on November 5.