Microplastics discovered in ‘extreme’ concentrations in the North Atlantic 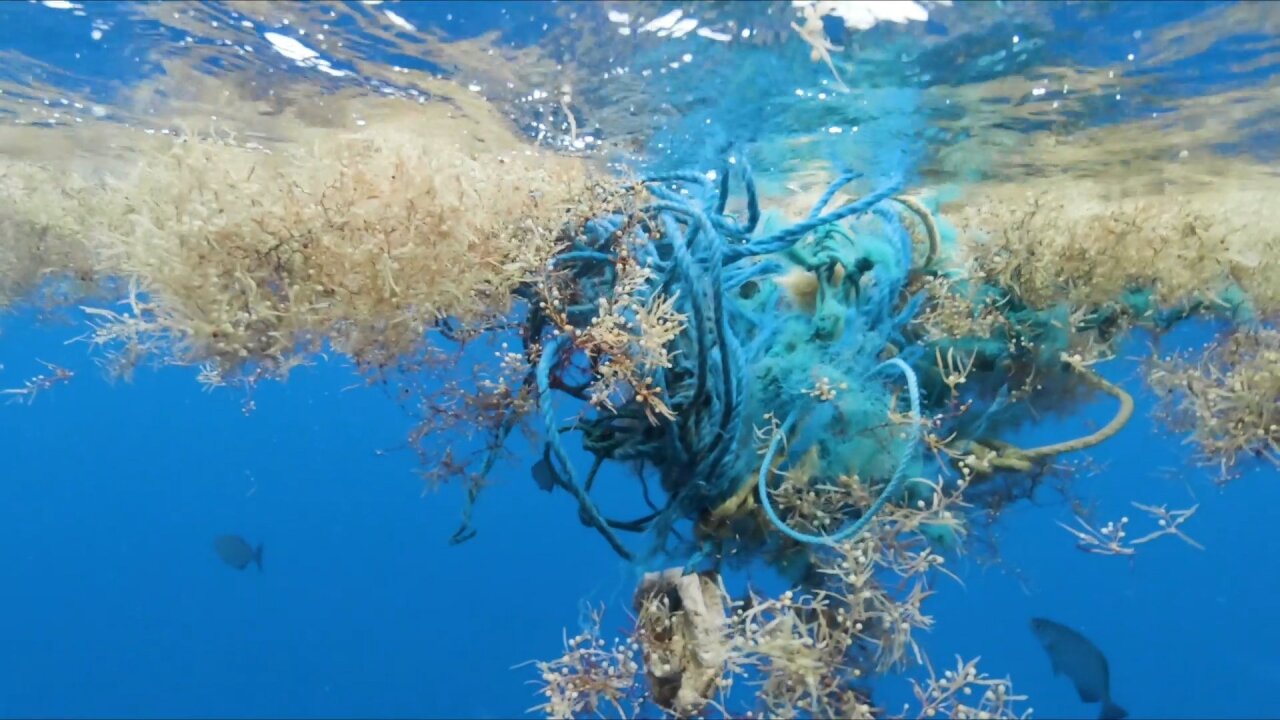 Embedded in most of the sargassum are the easily visible pieces of trash: shampoo bottles, fishing gear, thick hard containers or thin soft bags amongst many other types of plastic.

Embedded in most of the sargassum are the easily visible pieces of trash: shampoo bottles, fishing gear, thick hard containers or thin soft bags amongst many other types of plastic.

Within the Atlantic Ocean is the world’s only sea without shores, its borders defined by the currents of the North Atlantic gyre. The Sargasso Sea takes its name from sargassum, a free-floating golden brown seaweed that is a haven for hatchling sea turtles and hundreds of other marine species who use it to feed, grow and hide from predators. But the sargassum is now home to objects wholly unnatural too.

Caught up in the swirling gyre is a growing collection of human waste: trash from countries that border the Atlantic, from the west coast of Africa to the east coast of the US, slowly breaking up on its long journey into microplastics that end up in the gills and stomachs of aquatic animals.

We joined a Greenpeace expedition to the Sargasso where scientists were studying plastic pollution and turtle habitats. Our mission was to get a better understanding of what lives out on the sargassum ecosystem, what is threatening it, and how that may impact us.

My cameraman, Brice Laine, and I thought we had an understanding of how humanity’s reliance on plastic has impacted Earth. We have reported from the remotest regions of our planet, from the Arctic to the Antarctic, where we witnessed the discovery of microplastics, fibers and PFAS (chemicals that are used as stain and water repellents in things like cookware and outdoor gear).

Read more: Protecting the Antarctic: A journey to a continent in distress

The Sargasso Sea is another place where few humans venture. Constantly changing with the currents, this oval shaped body of water is around 1,000 miles wide and 3,000 miles long. From the bow of our ship, Greenpeace’s Esperanza, the water looks pristine, inviting. Having never really been in waters like this — the open ocean, often believed to be a biodiversity desert — we’re excited to get in.

There are small schools of juvenile trigger and file fish, and other species darting around or just hiding within the sargassum. There are many species we don’t see, too small, too apt at blending into this rich nursery ground like young shrimp and crab, tiny frog fish, and what we really hoped to find but didn’t — baby turtles.

Embedded in most of the sargassum are the easily visible pieces of trash: shampoo bottles, fishing gear, thick hard containers or thin soft bags amongst many other types of plastic. One of the scientists points out fish bite marks in a small plastic sheet we pull out. But what is really jarring is when you dive down and look into the blue and realize you are surrounded by tiny glittering pieces of broken up plastic called microplastic.

It wasn’t until witnessing it that the extent of plastic pollution and what it means sank in. And it’s terrifying.

Greenpeace scientists say they found “extreme” concentrations of microplastic pollution in the Sargasso Sea, although they are still reviewing their findings. In one sample, they discovered almost 1,300 fragments of microplastic — more than the levels found last year in the notorious Great Pacific Garbage Patch.

Their analysis indicates this pollution originates from single-use plastic bottles and plastic packaging, according to Greenpeace.

Greenpeace’s trip to the Sargasso is part of its year-long pole-to-pole expedition to campaign for a Global Ocean Treaty that calls for the protection of a network of ocean sanctuaries covering 30% of the world’s oceans by 2030.

Off the side of the Esperanza, the manta trawl lazily gobbles up water samples from the ocean’s surface that are filtered through its long mesh tail. An hour later, what is collected shows us the bleak reality of what is in the water.

“In most of the samples that we have been sampling where there is sargassum we have seen a lot of plastics because they get entangled in the sargassum,” Celia Ojeda, a marine biologist with a PhD in ocean conservation, explains, pointing to the tiny pieces floating at the top of one sample.

“It’s a really nice blue; you can’t imagine what is under there, and then when you get the sample you get really shocked at the numbers,” she says.

Along with research assistant Shane Antonition, who is with the Bermuda Aquarium Museum and Zoo, Ojeda spends hours picking through the sargassum and what was collected in the manta trawl net.

Grabbing the tiny pieces with tweezers, she places them carefully on paper to count.

Antonition was part of a similar study years ago. “The more I learn, the more I see how much more like a spaceship Earth is, and how fragile these systems are and how much we rely on these ecosystems services to keep us alive. So, (we are) learning more about our impact on the earth and using those discoveries to inform the change that can prevent further degradation of our environment,” he says.

From your bin to your plate, via the ocean

Only around 9% of plastic produced has ever been recycled. Most single-use plastics end up in landfills or are burned in huge toxic fires. Some finds its way into our rivers or the oceans, either flushed into water systems or blown by wind currents.

“This goes into the food chain.” Ojeda explains. “The fish and shrimps eat the plastic, we are eating them or the fish that eat them, and this will end up in our bodies somehow.”

The plastic humans discard — food wrappers, plastic bags, even nappies — find their way back into homes in the food that you buy. A study from June 2019 said the average person ingests around 2,000 microplastic particles a week — around five grams, or the weight of a credit card. What scientists don’t yet fully understand is what that plastic or the toxins that plastic contains can do to us.

Plastic pollution is hardly a new phenomenon. A study off the shore of Bermuda back in the early 1970s found 3,500 pieces of plastic per square kilometer. A more recent, as yet unpublished study by the Bermuda Aquarium Museum and Zoo found that nearly 42% of fish samples had ingested microplastics.

Read more: Fires, floods (and even bugs) are challenging Russia’s stance on the climate crisis

The weight of evidence that humans are contaminating one of our major food sources is overwhelming — not only introducing potential toxins into our own bodies, but also polluting whole ecosystems and killing precious marine animals.

How can you protect the ocean?

The key to tackling ocean plastic is to stop it getting there in the first place, but the solution doesn’t just lie with recycling.

“We need to be reusing and refilling,” Ojeda says. “The consumers are doing a lot of things, but if you as a consumer are going to the supermarket and you are unable to buy something which is not wrapped in plastic it’s not your fault. You are a person. It’s companies; companies need to take the step, need to lead the change — and governments need to push the companies.

“For the oceans to recover to we need to stop them (plastics) now. If we are thinking we can stop them in 10 years, we can phase them out, no: we need to stop single-use plastic. Then the seas will have time to clean up.”

“We need to look at all the ways we are not understanding the fate of plastic,” says Robbie Smith, a marine ecologist and the curator of the Bermuda Aquarium and Zoo. “Recycling is terrible, even in the US. Countries are facing up to the reality, but they are not ready to turn off the tap.

“We need to look at the types of plastic we are using and eliminate the ones that can’t be recycled. We need to tidy up land-based sources (landfills and the like).

“We need to be more respectful that plastic is a great tool but can become a nightmare,” he adds. “There is no quick fix. Nothing is going away fast. It takes a decade or two for plastic to make its way into the watershed.”

Few of us witness what is out in the open oceans far from our homes, which is one of the many challenges for ocean protection and why few truly understand how dire the situation is. Out of sight, out of mind.

But in reality, it’s ending up right back in front of us — and inside us — even though we may not see it.