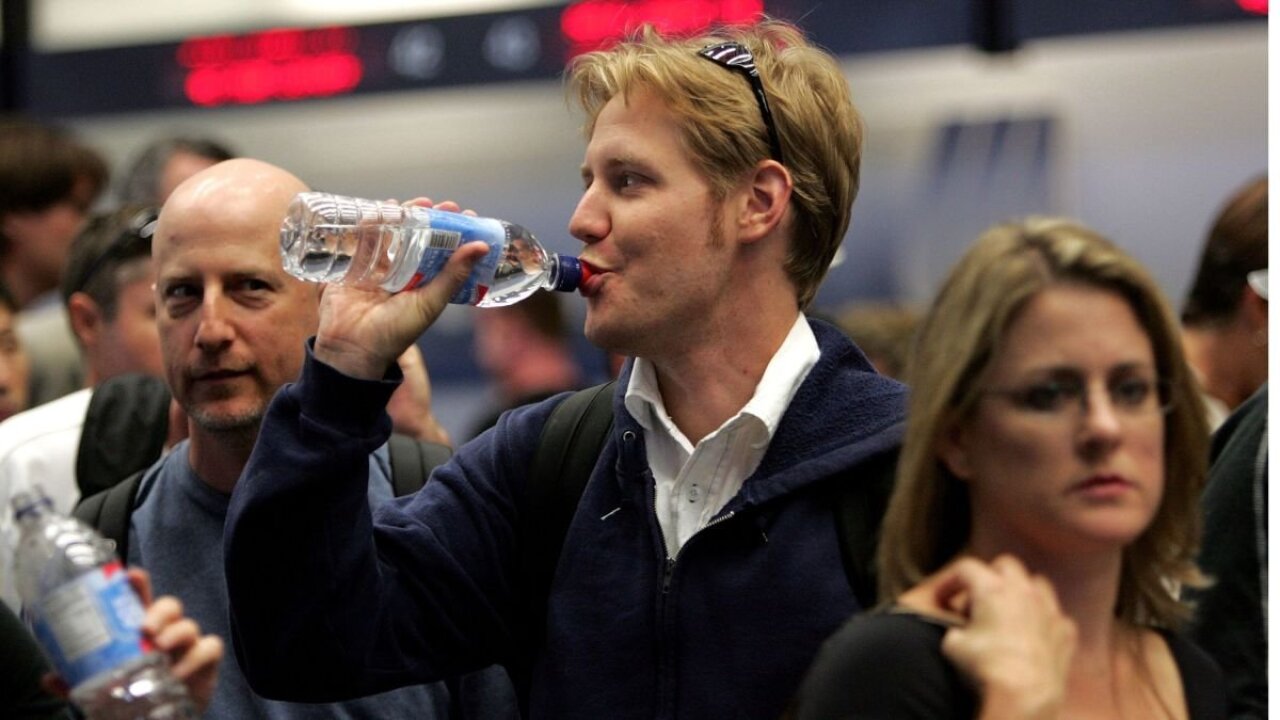 Want to hydrate at San Francisco International Airport? Forget plastic water bottles. You must use a water fountain, bring your own reusable bottle or buy an airport-approved glass or aluminum bottle.

Air travelers to and from the City by the Bay will now experience water in new ways.

Starting Tuesday, those wishing to hydrate at San Francisco International Airport will have to drink from a water fountain, bring their own reusable bottle or prepare to buy an airport-approved glass or aluminum water bottle.

The airport is adding plastic water bottles to its list of restricted food service items as part of an effort to become the world’s first zero-waste airport by 2021. According to the nonprofit Zero Waste Alliance, that means diverting at least 90% of waste from landfills and incinerators by recycling and composting.

What the ban includes

Purified water, carbonated or sparkling water, mineral water and electrolyte-enhanced water are all officially banned. This means airport vendors, including vending machines, can no longer sell or provide free bottled water in a plastic bottle, a sealed box, can or other container intended primarily for single-service use and having a capacity of 1 liter or less.

Vendors will be able to sell or provide reusable recyclable aluminum, glass and certified compostable water products, according to the airport. Travelers also have the option of bringing empty disposable plastic water bottles to fill up at any of the airport’s approximately 100 free water fountains and hydration stations.

Critics may wonder if the new water-bottle ban is truly green or just greenwashing — falsely conveying that environmental responsibility has been factored into its operations. After all, the initiative does not apply to bottles of flavored drinks, such as soda, iced tea, coffee and juice.

Others, though, see the step-by-step progress made by SFO, the code for the city’s airport. Earlier this year, for instance, the airport transitioned away from single-use plastic food-service ware and utensils.

Annually, SFO generates more than 28 million pounds of waste, including about 10,000 water bottles sold daily — amounting to nearly 4 million each year, according to the airport. Consider, too, that scientists estimate a single plastic bottle takes anywhere from 450 to 1,000 years to biodegrade.

And, just as Mother Earth is finding it difficult to process all this plastic, our human bodies may be experiencing the same problem.

Banning plastics could improve your health

Every day we ingest tiny, often microscopic pieces of plastic — “microplastics” — with our food, beverages and with the very air we breathe. In fact, Americans eat, drink and breathe between 74,000 and 121,000 microplastic particles each year, depending on their age and sex, according to a recent study published in the journal Environmental Science & Technology.

If bottled water (and not tap) is our only source of hydration, annual plastic particle intake via drinking water is estimated to be approximately 75,000 for boys, 127,000 for men, 64,000 for girls and 93,000 for women, the researchers noted.

The total health impact of ingesting plastic is not yet known. But studies suggest that some particles are small enough to enter our tissues, where they can trigger an immune reaction, or release toxic substances and pollutants absorbed from the environment, including heavy metals.