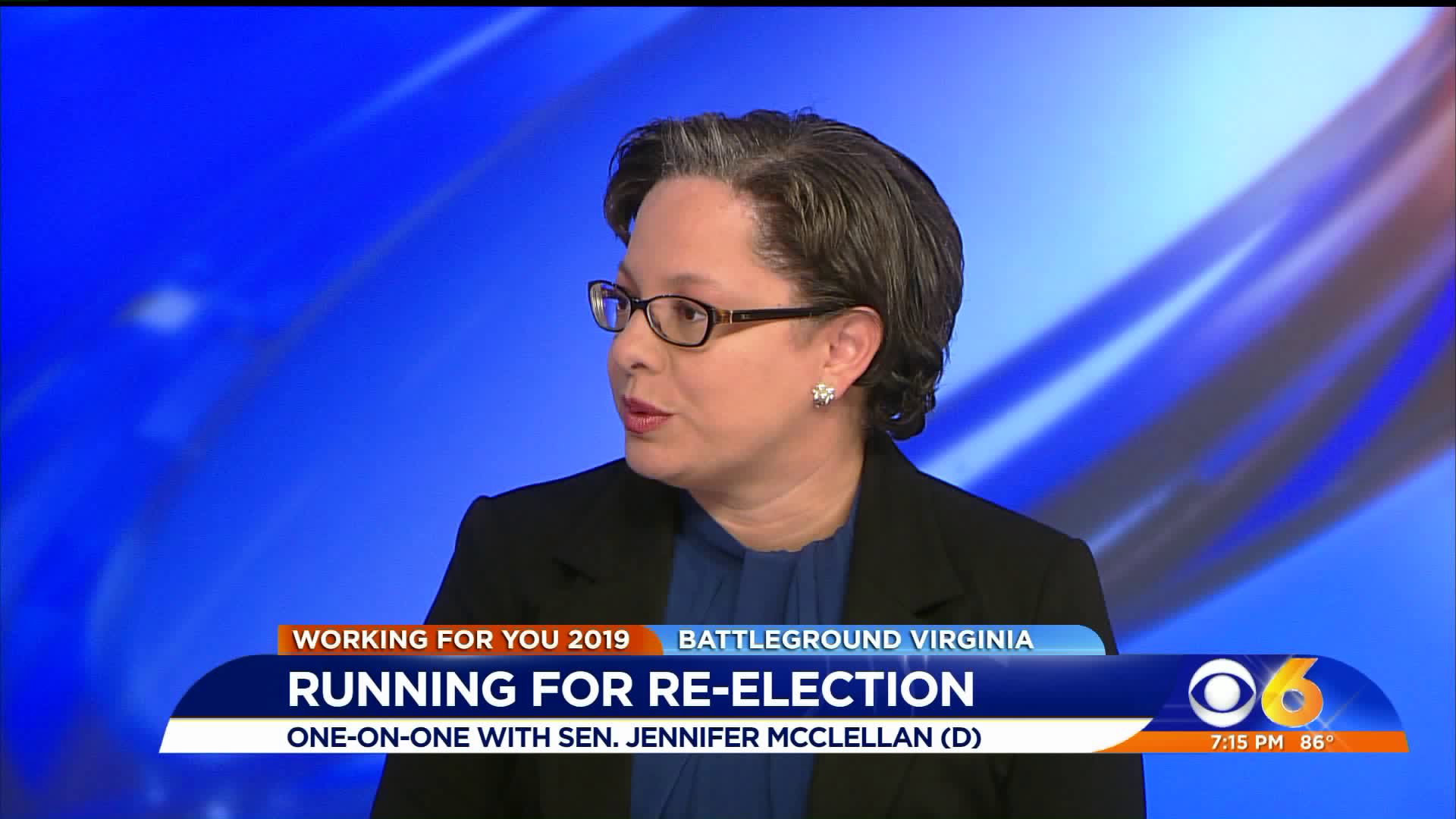 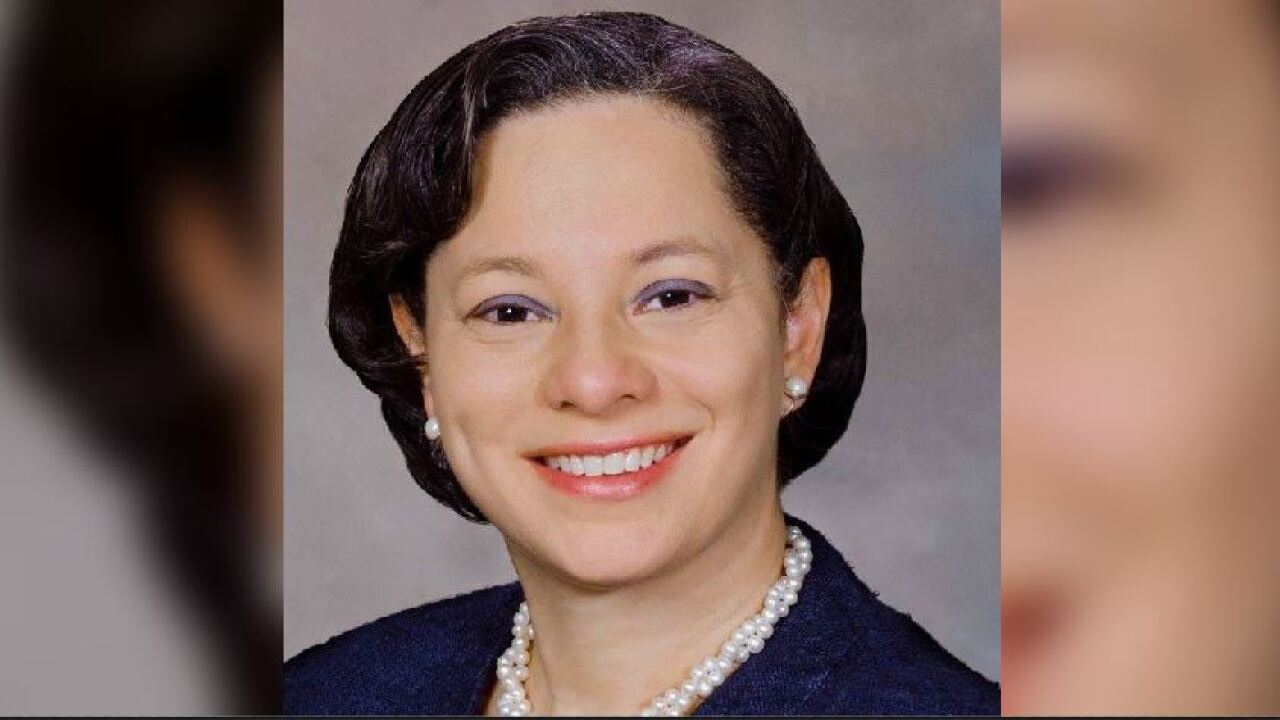 RICHMOND, Va. -- While much the country's political focus is on the 2020 presidential race, Virginia's November elections will see every seat in the Virginia General Assembly up for grabs. CBS 6 invited the candidates from each Senate and House district in the Richmond Metro area to talk about their campaigns.

Virginia’s 9th District has a population of over 200,000 residents, 150,000 of whom are registered voters. The district, which encompasses much of parts of the City of Richmond, Henrico County, Hanover County, and Charles City County typically supports Democratic candidates. It has a racial population breakdown of 53% black and 40% white voters.

Sen. Jennifer McClellan, a Democrat who represents Virginia's 9th Senate District, said the 2019 election is about the balance of power in Virginia.

"[This election] is really about continuing the progress that we have made, but we still have so much more to do," Sen. McClellan said during her Battleground Virginia interview on CBS 6 News at 7. "The majority is at stake. And there are so many issues where we have not been able to go as far as we could to make Virginia a better place, based on who is in the majority."

Mark Lewis is a Libertarian candidate in Senate District 9. Lewis is a Virginia Commonwealth University alum who graduated with a Bachelor of Science in Political Science in 2016.

If elected, the issues Lewis said he planned to tackle focused on minimizing government in Virginia.

Lewis, who said he credited Rev. Martin Luther King Jr. as one of his political influences, told Bill Fitzgerald on CBS 6 News at 7, that his platform primarily advocates for the legalization of marijuana, lowering taxes, and cutting spending across the board by 10%.

His also would end corporate welfare and stop the war on drugs.

“It’s going to take compromise and I think it’s also going to take people realizing that the war on drugs isn’t working,” Lewis said. “It’s been going on for like 50 years now and all we’re doing is locking up non-violent people and it really hasn’t had any noticeable impact on drugs coming into the country.”

Lewis said programs medicaid expansion would likely be impacted by his budget cts. But, he said, it would make for a better healthcare system.

“The way to make healthcare cheaper is to get government out of it,” Lewis said.

Lewis said he would also repeal the Certificate of Public Needs laws and reduce regulations and restrictions for the purposes of making healthcare services more widely accessible to everyone; regardless of circumstance.

He said he opposed giving tax breaks to companies like Amazon. He said that money could be better spent.

"When the government is giving these big subsidies to companies just like Amazon, they’re picking winners and losers,” Lewis said. “And they’re messing with the market in a way that it shouldn’t be messed with.”

He said he supported the Constitution’s Second Amendment, aiming to end gun prohibition in churches, and added he did not agree with many of the measures taken to prevent gun violence.

“I haven’t seen a gun control measure yet that even its proponents would be willing to admit will stop those attacks from happening,” Lewis said. “So, from what I’ve seen, gun control measures, so far, they’re ineffective and no one’s really talking about why.”

Lewis said he believed that “rich white neighborhoods” would be able to get around laws that enforce universal background checks and gun-show-loopholes.

“Only effect it would have is a disproportionate effect on minority communities,” Lewis said.

“I think Democrats and Republicans need to do something, universal background checks, banning assault weapons or reducing access to assault weapons," she told Fitzgerald in her CBS 6 News at 7 interview. "I have legislation out now to report lost and stolen firearms."

“Making sure that we are fully funding our education system, that the teachers have the resources they need. That our schools have all of the professionals we need in place,” she said.

With funding always being a concern, McClellan said there were ways in which funding K-12 education can be found.

“There are a number of areas where we could shift money, particularly some of the tax credits that have not proven effective, we could sunset and a big part is where we have economic growth,” she said.

Another issue in which she differed from Lewis was her stance on using state money to attract companies like Amazon to Virginia.

“I think there are some investments Amazon is putting in, partnerships with higher education, focus on affordable housing that will help,” McClellan said.

She further explained that this investment was something that could really help Virginians.

“It’s not just that we are going to bring this company in, but it’s also we are going to look at that whole community and make sure that package includes some investments in workers, but also beyond Amazon in other parts of the economy.”

On the issue of marijuana reform, McClellan said lawmakers were having tough conversations about legalization, but the devil remained in the details.

"We have got to take a broader look at that and make sure you don’t still have people in jail for something that is legal,” McClellan said.