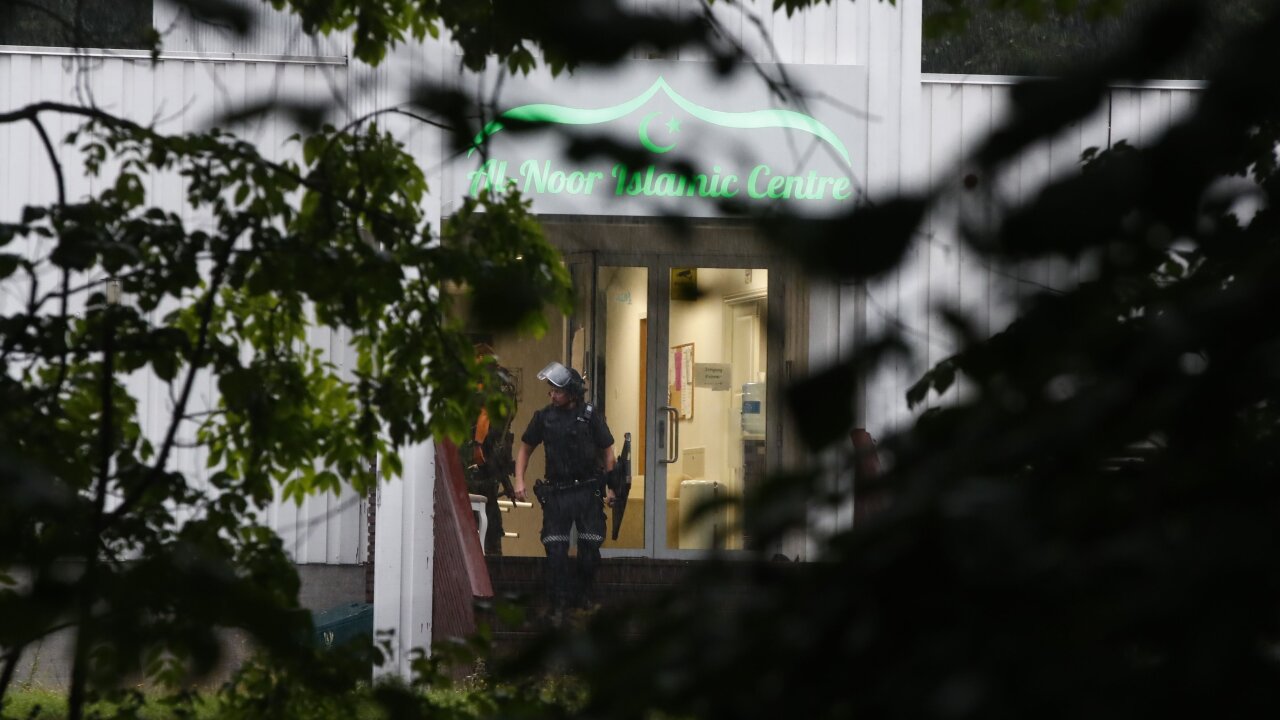 A Norwegian police officer stands outside Al-Noor Islamic Center, where police say two people were wounded during a shooting.

OSLO, Norway — The man suspected of opening fire at a mosque in the Norwegian capital of Oslo on Saturday has expressed right-wing sympathies online, the police said in a news conference Sunday.

Superintendent Rune Skjold told reporters the suspect, described only as a Norwegian man in his 20s, has praised figures like Vidkun Quisling, the leader of Norway under Nazi occupation during World War II.

The shooting is being investigated as a “possible act of terrorism,” police said.

The man has been charged with the murder of a woman found dead in his home and is also facing an attempted murder charge in the shooting at Al-Noor Islamic Center in Oslo. One person was injured in the incident, sustaining minor injuries, police said.

Shortly after the attack, investigators found the body of a young woman at the suspect’s home in Baerum, just west of Oslo. Police said the woman was related to the suspect, but did not specify how.

The suspected shooter was overpowered during the attack by a 65-year-old man named Mohamed Rafiq, said his counsel Abdul-Satar Ali on Sunday.

Speaking to the press with Rafiq at his side, Ali said: “Mohamed acted immediately when the shooter entered the room. He toppled the shooter and pinned him to the floor, (and) sat on top of him.”

Earlier, a member of the mosque told Norwegian state broadcaster NRK that Rafiq was 75 years old, but his counsel confirmed to CNN that he is 65.

Imran Mushtaq, a board member at the Al-Noor mosque, told NRK that more than a dozen people were praying inside the mosque just 10 minutes before the suspect arrived. But by the time the shooting began, only three older men were left inside, said Mushtaq, who was at his home nearby at the time.

The suspect entered by shooting through the mosque’s locked glass door, Mushtaq said. Multiple weapons were found inside the mosque, police said. The weapons are believed to be connected to the suspect.

The shooting occurred as Muslims around the world celebrate Eid al-Adha this weekend, one of the most important holidays of the Islamic calendar. It marks the height of the annual Hajj pilgrimage to Mecca in Saudi Arabia.

Norwegian police said earlier they were trying to determine whether there were wider threats to other mosques. Extra personnel were deployed Sunday to protect mosques and Eid celebrations.