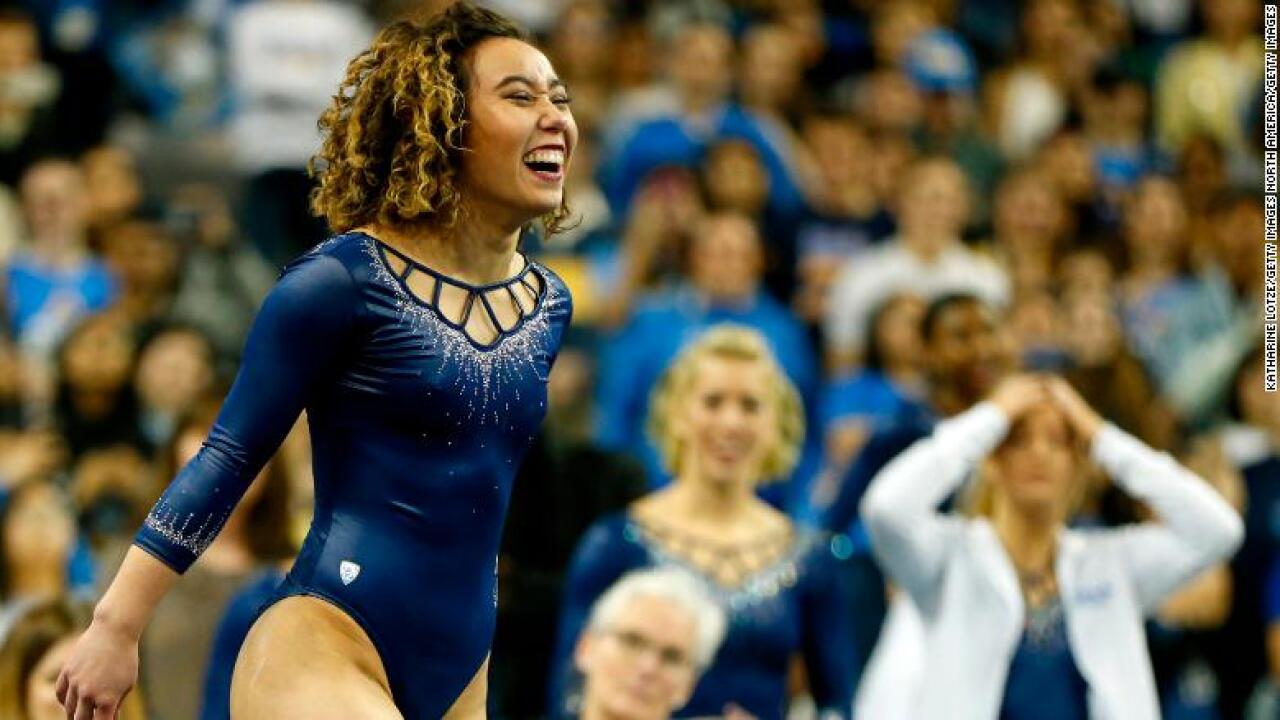 LOS ANGELES, CALIFORNIA – MARCH 10: Katelyn Ohashi competes during the floor exercise during a meet against Stanford at Pauley Pavilion on March 10, 2019 in Los Angeles, California. (Photo by Katharine Lotze/Getty Images)

Earlier this year Katelyn Ohashi shot to fame when a video of her perfect 10 floor routine for UCLA gymnastics went viral, amassing over 118 million views online.

The Seattle native is regularly stopped in the street by people wanting pictures, but the “perfect 10 girl’s” sudden fame has had it downsides.

While the positivity and energy that shone through in her performance as she danced to Beyoncé and Tina Turner resulted in glowing praise from all over the world, Ohashi was also subjected to a number of body shaming comments on social media.

“I feel like, a lot of times, I’ve felt alone when I was going through all this stuff,” Ohashi told CNN Sport’s Patrick Snell.

“Social media portrays one side of a person that they don’t mind you seeing, but the other parts are hidden and not so openly talked about.

“And so being that person that welcomes every person that doesn’t feel ‘normal’ — or whatever that means right — with open arms and make them feel like they’re not the only people. Because, trust me, everyone’s going through their own things.”

READ: Simone Biles to USA Gymnastics: ‘You had one job and you couldn’t protect us’

A voice for good

She has a blog with a friend Maria Caire where the pair discuss “the body-image issues athletes endure'” and for Ohashi herself, living with a rare skin disease and ulcerative colitis.

She used her acceptance speech for her two ESPY’s awards — for “Best Play” and “Viral Sports Moment” — to call out body shamers, catapulting her into the world’s conscience.

Ohashi accepts the Best Play award onstage during The 2019 ESPYs.

“I would definitely say I am aware, because I receive messages and it’s so heartwarming to hear people reaching out — like, ‘I’ve been able to remove my bandages,’ or ‘I related so much to your blog post’ and things like that,” said Ohashi.

“Being able to help people is what I strive for. They always say, ‘those 15 minutes of fame,’ right? I’ve managed to elongate my time from one gymnastics video, which is really amazing to see.

“And continuing to spread this positive message to other people that might be struggling or need to hear exactly what I’ve been through.”

READ: Team USA predicted to have another bumper Olympics at Tokyo 2020

Ohashi became involved with gymnastics as a three-year-old, and by the age of four, she was able to do a back handspring.

But her journey to where she is now — she scored six perfect 10s in the 2018/19 season — has been anything but straightforward.

LOS ANGELES, CALIFORNIA – MARCH 10: Katelyn Ohashi competes during the floor exercise during a meet against Stanford at Pauley Pavilion on March 10, 2019 in Los Angeles, California. (Photo by Katharine Lotze/Getty Images)

At the age of 15 and at the perceived peak of her powers, Ohashi was beating the likes of Simone Biles — now the most decorated gymnast of all time — on the way to winning the American Cup.

But due to the stress and amount of training she was putting herself through, Ohashi knew she was injured and the pain she was battling through limited any joy she got from winning.

After undergoing scans, she discovered she had been competing with a fractured back and two torn shoulders and, going against the advice of the then-national medical coordinator for USA Gymnastics, Larry Nassar, Ohashi had surgery on the injuries.

Once a world-renowned sports physician treating America’s foremost Olympic women gymnasts, Nassar was sentenced to 40 to 175 years in prison last year after more than 150 women and girls said in court that he sexually abused them over the past two decades.

After her surgery there was no guarantee Ohashi would be able to participate in gymnastics at all, let alone competitively. But after just a year out and acknowledging that her body could not handle elite gymnastics, she joined the UCLA Bruins gymnastics team and fell in love with the sport again.

Surgery isn’t the only obstacle Ohashi has had to come overcome.

Due to the strenuous demands placed on them by gymnastics, Ohashi and some of her fellow gymnasts were driven to eating disorders.

In an interview with Marie Claire in April, Ohashi said of that time: “We would measure our thighs and if we couldn’t fit our hands around our mid-thighs, then we’d stop eating for the rest of the day.

“Whenever we’d go to a party where there was a lot of food, we’d feel so bad about eating that we would go to the bathroom and throw up without realizing that’s an eating disorder.”

Her honesty has struck a chord and Ohashi now regularly receives messages of support from her fans because of the positive body image energy she exudes.

“I got the honor of speaking on the phone with to a girl,” Ohashi remembers. “Just last week, I was on FaceTime, and she’s gone through a lot of similar injuries that I did.

“And to let her know from an early age that you don’t have to be validated by your score or one thing that you do — you’re a human being, and there’s so much that we have to offer the world.

“She reached out, and she was just like, ‘it helped me so much, and it made me so happy to hear you say that you were proud of me.’ That was another thing that was heartwarming to hear.”

READ: The Auburn gymnast who dislocated both knees now just hopes she can walk down the aisle

Given the Nassar sexual assault scandal, Ohashi says gymnastics can evolve and develop from the dark cloud that has been hanging over the sport.

“I think a lot of it came from ignoring the athletes’ voices. So, you can see that the repercussions happened at huge extremes,” she said.

“Unfortunately, it had to get to this in order to rebuild. But I think we’re trying to get on the right path, hopefully, of listening to the athletes and having open communication between athletes and coaches, coaches and parents, and parents and athletes, because that’s so important.

“Really taking the time to figure out who they want to represent everyone, in like a checks and balance system almost, because it is very easy for people in high power to take advantage of that and abuse their power.