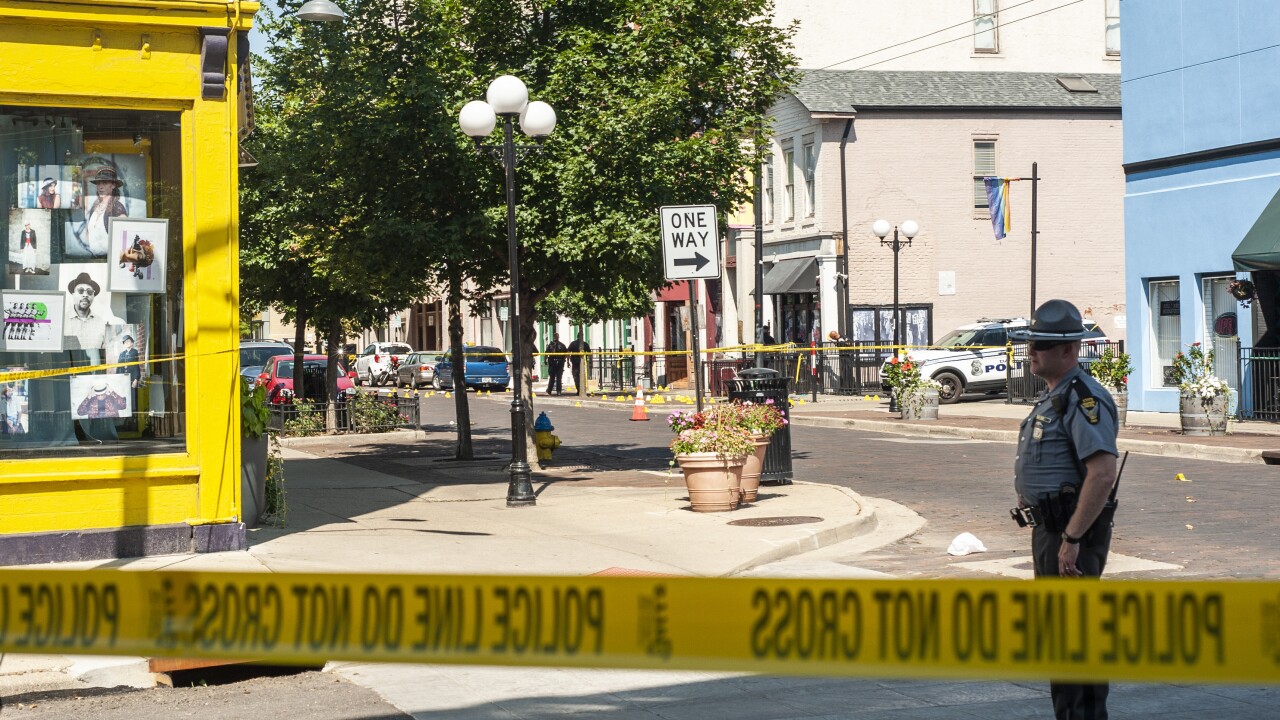 Law enforcement officials investigate the scene where a gunman opened fire on a crowd of people over night on Fifth Avenue in the Oregon District on August 4, 2019 in Dayton, Ohio. In the second mass shooting in the U.S. within 24 hours a gunman left nine dead and another 27 wounded after only a minute of shooting. (Photo by Matthew Hatcher/Getty Images)

DAYTON, Ohio — As a high school student, the gunman in the Dayton, Ohio, massacre had a “hit list” of classmates he wanted to kill or hurt, according to four former students who said they were told by school officials they were on the list.

Spencer Brickler said a counselor at Bellbrook High School told him that he and his sister were on Connor Betts’ hit list. Brickler said he was riding on a school bus when he saw Betts getting escorted off by officers who were investigating the threats.

“He was kind of dark and depressive in high school,” said Brickler, who recalled the incident occurring about nine years ago when he was a freshman. He said he had no idea what prompted Betts, then a sophomore, to put him or his sister on the list.

The information has taken on new significance now that Betts has been identified as the gunman who killed nine people early Sunday morning in a popular nightlife district in downtown Dayton, authorities said. Police officers on patrol nearby immediately responded and killed Betts less than a minute after he opened fire, authorities said.

In response to CNN’s inquiries about the hit list, Bellbrook-Sugarcreek Schools Superintendent Douglas A. Cozad said, “At this point, I can confirm that Connor Betts was a student at Bellbrook-Sugarcreek Local Schools his entire school career and graduated from Bellbrook High School in 2013.

“Since he has not been a student here for over six years, we are still gathering additional information and will release it as soon as we can,” Cozad said.

Another former classmate, who asked not to be identified out of concerns for his privacy, also recalled being summoned to a school administrator’s office and being told he was “number one” on the list of students Betts wanted to kill.

A third person, who also asked not to be named for privacy reasons, told CNN that Betts sent messages about the list to one of his classmates, who told her mother. Her mother then notified the police, who came to the school and interviewed people on the list individually in the school’s office.

“Personally, it freaked me out,” said the classmate who was told she was on the list. “I started having panic attacks in the school building.”

A fourth person, who also asked not to be named for privacy reasons, said, “All I know is there was a list of violent actions and a list of names including mine.”

She said some of the names were female students who, like her, turned him down for dates. She said Betts often simulated shooting other students and threatened to kill himself and others on several occasions.

“He loved to look at you and pretend to shoot with guns, guns with his hands,” she said.

Another former classmate, who was not on the list, said that he met Betts through a “friend of a friend.” He said whenever they hung out, Betts would talk about violence and use harsh language about women, like calling them “sluts.”

Betts’ former classmates told CNN that they recalled Betts being removed from the school for at least a year, but that he later returned to Bellbrook High.