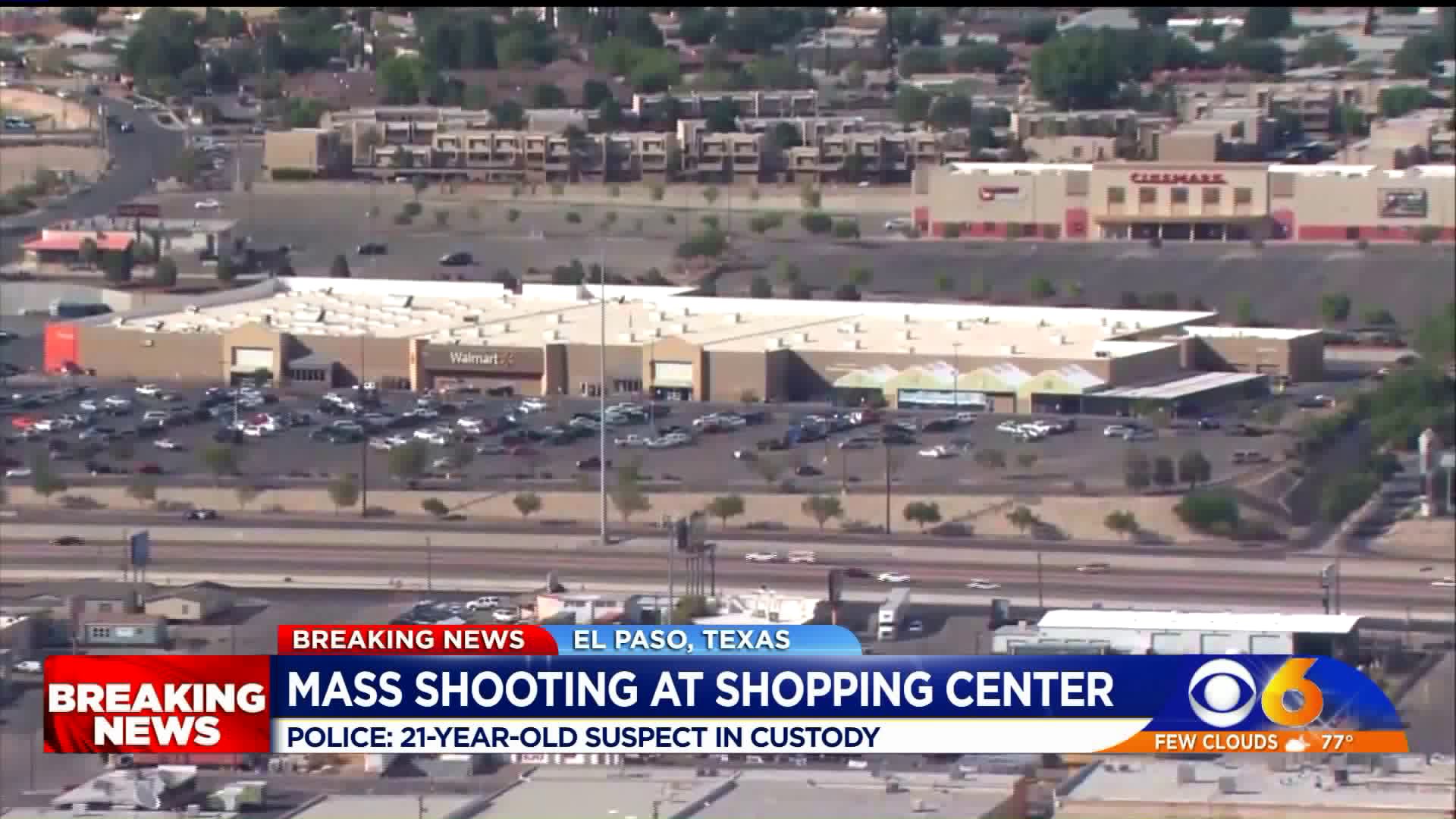 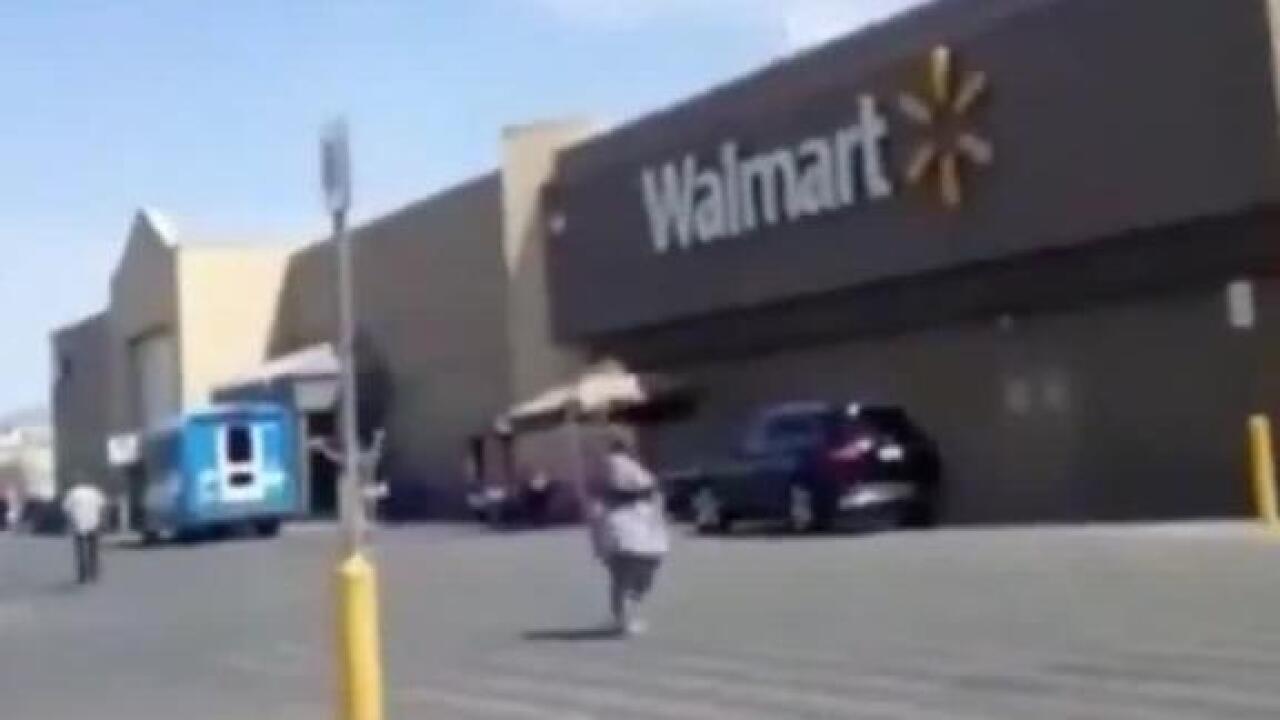 More than two dozen people were injured in the shooting at Walmart, where some of the chaos was caught on camera. Images showed victims lying in the parking lot.

Police say they have a 21-year-old man in custody and they believe that he is the author of a racist, anti-Hispanic document detailing motivations for the shooting.

Here's what we know:

Where the shooting took place

Police began receiving reports of an active shooter just after 10:30 a.m. They received multiple calls from stores at the mall complex.

In a shaky Snapchat video aired by CNN, a woman holding the camera runs through a mall department store and into a parking lot. As the group hurries past racks of clothes and cases of merchandise, voices off-camera shout, "Hands up!"

Another video, taken outside the Walmart, showed people lying on the ground, some of them next to a table set up by the store's entrance.

"There's a man lying down at the stand that a school set up," the man holding the camera says in Spanish.

"Help!" a man screams in English.

Gomez said it's estimated that up to 3,000 shoppers and 100 employees were inside the Walmart.

At least 20 people were killed in what was "one of the deadliest days in the history of Texas," Abbott said.

One of the victims was Jordan Anchondo, 24, who died while shielding her 2-month-old son, her aunt Liz Terry told CNN. A mother of three, Anchondo was shopping for back-to-school supplies when she was shot, Terry said. Her husband, Andre, is still unaccounted for.

"The baby still had her blood on him," Terry said. "You watch these things and see these things and you never think this is going to happen to your family. How do parents go school shopping and then die shielding their baby from bullets?"

On Saturday, in a tearful interview, Edie Hallberg said she was seeking information about her mother, Angie Englisbee. On Sunday, the family told CNN that 86-year-old Englisbee had been killed.

The other 18 victims have not been publicly identified, with authorities citing the investigation and pending next-of-kin notifications.

Six Mexicans were were among those killed, President Andrés Manuel López Obrador said. The President originally said on Twitter on Saturday that three died.

Eleven people were transported to the Del Sol Medical Center, Dr. Stephen Flaherty said. Eight are in stable condition, and three are in critical condition, and the patients ranged in age from 35 to 82, he said.

Who's believed to have carried out the shooting

The suspect in the deadly shootings at the shopping complex has been identified as Patrick Crusius, 21, of Allen, Texas, a Dallas suburb about 650 miles from El Paso, three sources told CNN.

Allen, the police chief, said the shooter surrendered to officers when they approached him in Walmart.

Collin College, northeast of Dallas, confirmed in a written statement that Crusius was a student there from 2017 to 2019.

Crusius' grandparents released a statement Sunday that was read to reporters by a family spokesman who did not want to be named.

"We are devastated by the events of El Paso and pray for the victims of this tragedy. Patrick Crusius is our grandson. He lived with us in our house in Allen, Texas while he attended junior college at Collin County College. He moved out six weeks ago and spent a few nights here while we were out of town. His drivers license and mailing address were at our house in Allen — that connection has made us the focus of media," the spokesman said, reading from the statement. "We are talking only to law enforcement agencies and will not be making further statements to the media. We request the media to honor our privacy."

Where the investigation stands

Initial reports were that the weapon used in the shooting was a rifle, El Paso Police Sgt. Enrique Carillo said.

The FBI in El Paso tweeted to ask anyone who took video or pictures during and after the shooting to submit them to investigators.

The crime scene will "be in play for a long period," Allen said.

El Paso County District Attorney Jaime Esparza said that the suspect is charged with capital murder and that authorities will seek the death penalty.

US Attorney for the Western District of Texas John Bash said the Justice Department is "seriously considering" bringing federal hate crime and federal firearm charges, which also come with the possibility of the death penalty.

The Justice Department is "treating this as a domestic terrorist case," Bash said. The case appears to meet the statutory definition of domestic terrorism, he said, and "appears to be designed to intimidate a civilian population, to say the least."

FBI Director Chris Wray on Sunday ordered offices across the country to conduct a new threat assessment in an effort to thwart future mass attacks in the wake of the shootings in Ohio, Texas and California, law enforcement sources tell CNN.

Wray created a command group at FBI headquarters in Washington to oversee the effort, the sources said.

Law enforcement officials are investigating a four-page document posted to 8chan that they believe was written by Crusius. 8chan is an online message board rife with racist and anti-Semitic conspiracy theories.

The document was attached to a post on 8chan that said, "I'm probably going to die today." A CNN analysis of the 8chan post found that it was posted less than 20 minutes before police received the first calls about the shooting.

It is filled with white nationalist and racist hatred toward immigrants and Hispanics, blaming immigrants and first-generation Americans for taking away jobs and the blending of cultures in the United States.

The writer discussed fears of an influential Hispanic population in Texas that would make the state a "Democratic stronghold" and said "the Republican Party is also terrible," because the party is pro-corporation, which can lead to more immigration. The writer wrote that their opinions on immigration predate President Trump, and the writer appears to have held these beliefs for years.

The post further says the writer took less than a month to plan the shooting and describes the weapons used.

Facebook and Twitter say they are working to prevent people from sharing the document. Despite the companies' claims that they are removing the writings, CNN was easily able to find multiple versions of the writings on the platforms.

"We're proactively removing content that violates our policies and will be engaged with law enforcement, as appropriate," a Twitter representative said.

"Content that praises, supports or represents the shooting or anyone responsible violates our Community Standards, and we will continue to remove as soon as we identify it," a Facebook representative said.

What the suspect allegedly posted on social media

A Twitter account linked to the suspected shooter, which has seen little activity since early 2017, shows him sharing and retweeting President Trump's tweets, posting about the border wall and liking memes disparaging Bernie Sanders and Nancy Pelosi.

On February 13, 2017, Crusius' Twitter account liked a post from an anonymous account showing Trump's name spelled out with guns. Just a couple days before, he posted a tweet saying, "#BuildTheWall is the best way @POTUS has worked to secure our country so far!"

A LinkedIn profile posted under the name Patrick Crusius said he was a student at Plano High School. The profile said, "I'm not really motivated to do anything more than what's necessary to get by. Working in general sucks, but i guess a career in Software Development suits me well. I spend about 8 hours every day on the computer so that counts towards technology experience I guess."

Crusius also wrote that he worked as a bagger at a grocery store for five months, until he lost his method of transportation. About his education, under "activities," Crusius wrote, "I don't really participate in extracurricular activities b/c of a lack of freedom."