‘Park was full of people’ when dog was killed at Richmond school, official says 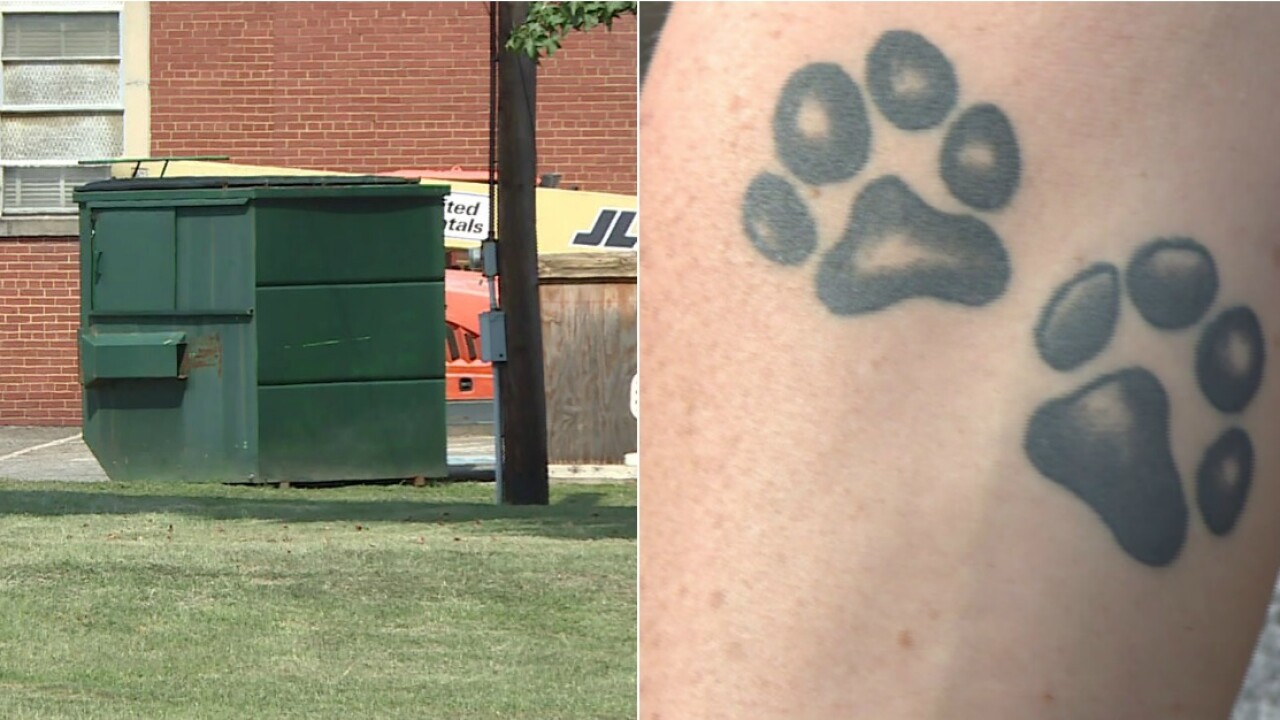 RICHMOND, Va. -- Officers with Richmond Animal Care and Control (RACC) are asking for the public's help after a dog was found strangled to death inside a dumpster at an elementary school.

The body of a 3-year-old, black and white, spayed female pit bull was recovered from a dumpster behind John B. Cary Elementary at 2:30 p.m. on Friday, July 26.

Richmond Animal Care and Control believe she was dumped just an hour or so before she was discovered.

The dog was found dead inside this dumpster.

"We found the dog very soon after the dog was put in there cause her body was still very intact, there was no rigor mortis," RACC Director Christie Chipps Peters said. "The park was full of people. There were kids and families everywhere."

Officials with RACC say it appears that the dog was strangled with a hunter green slip lead leash.

“No piece of information or recollection is insignificant. Please help us find the person/s responsible for this terrible crime,” RACC wrote.

The dog was micro-chipped and Chipps-Peters said they have spoken with the dog's previous owner.

"The owner of the dog had rehomed her. She’s been very helpful giving us some information," she explained.

But, detectives are working to build a strong case and are requesting assistance from eyewitnesses and surveillance video in the neighborhood.

"RPS is saddened by acts of violence and disregard for animal life. We fully support Richmond Animal Care and Control in their ongoing investigation," a Richmond Public Schools spokesperson said in a statement.

Erin Kutsko and her children were playing at the playground that borders the school's dumpster on Wednesday. She owns two pit bulls and called the crime "definitely upsetting."

"I hope that person [who did this] is really scared of getting caught and realizes the severity of what they’ve done," Kutsko said.

Why do people abuse animals?

Hundreds of comments posted to social media after yet another report of a dog abused asked the question: "Who could do something like this?"

Dr. Shelby McDonald has studied the links between animal maltreatment, child maltreatment, and intimate partner violence for the past decade as an assistant professor in the School of Social Work at VCU.

She currently leads the Children, Families, and Animals Research Group at the VCU School of Social Work.

"Often the cases that come to our attention involve companion animals, like dogs and cats; animals that many people consider to be members of the family. Because of the strong bonds people have with their pets, some individuals may use animal cruelty as a tactic that serves to control, intimidate, dominate, and/or retaliate against another person," McDonald explained.

McDonald said it's not surprising that violence against people and animal cruelty often overlap in households and communities.

"For individuals who lack healthy emotion regulation strategies and have not been exposed to positive models of humane treatment of pets, harsh physical punishment of pets may escalate and result in an animal’s death," she stated.

Her research also suggested that substance use has a significant role in the escalation of animal cruelty behaviors.

McDonald said an adult's decision to harm an animal often stems from a rough upbringing.

More often, studies of animal abusers have occurred in jails where researchers interview men who have committed other crimes. Less is known about animal cruelty among individuals who have not been charged with a crime, according to the professor.

McDonald is currently partnering with Richmond SCAN (Stop Child Abuse Now) on a study that will examine children’s exposure to community violence involving animals and its impact on children’s psychological health. She stated it may be the first studies of its kind.