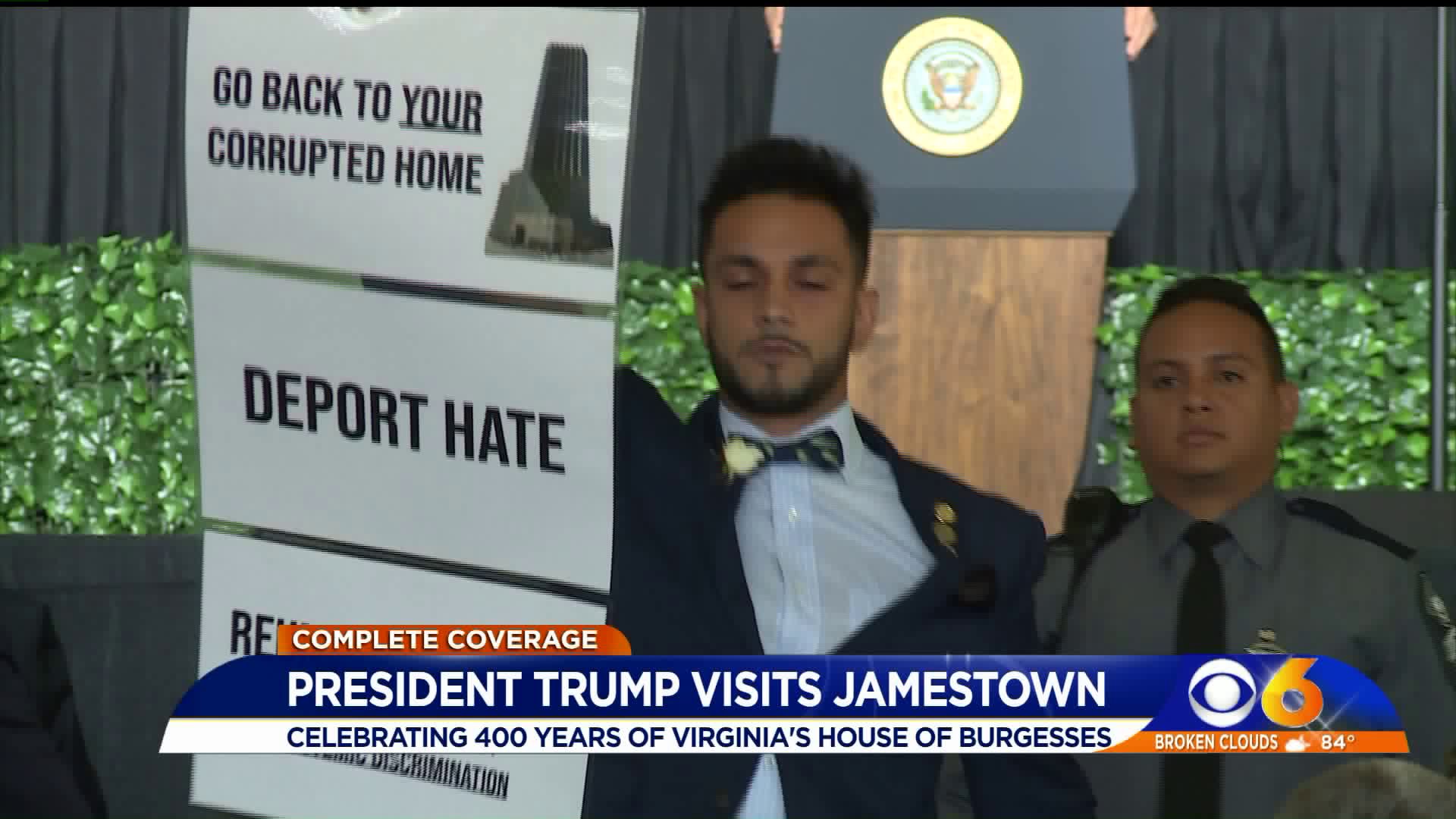 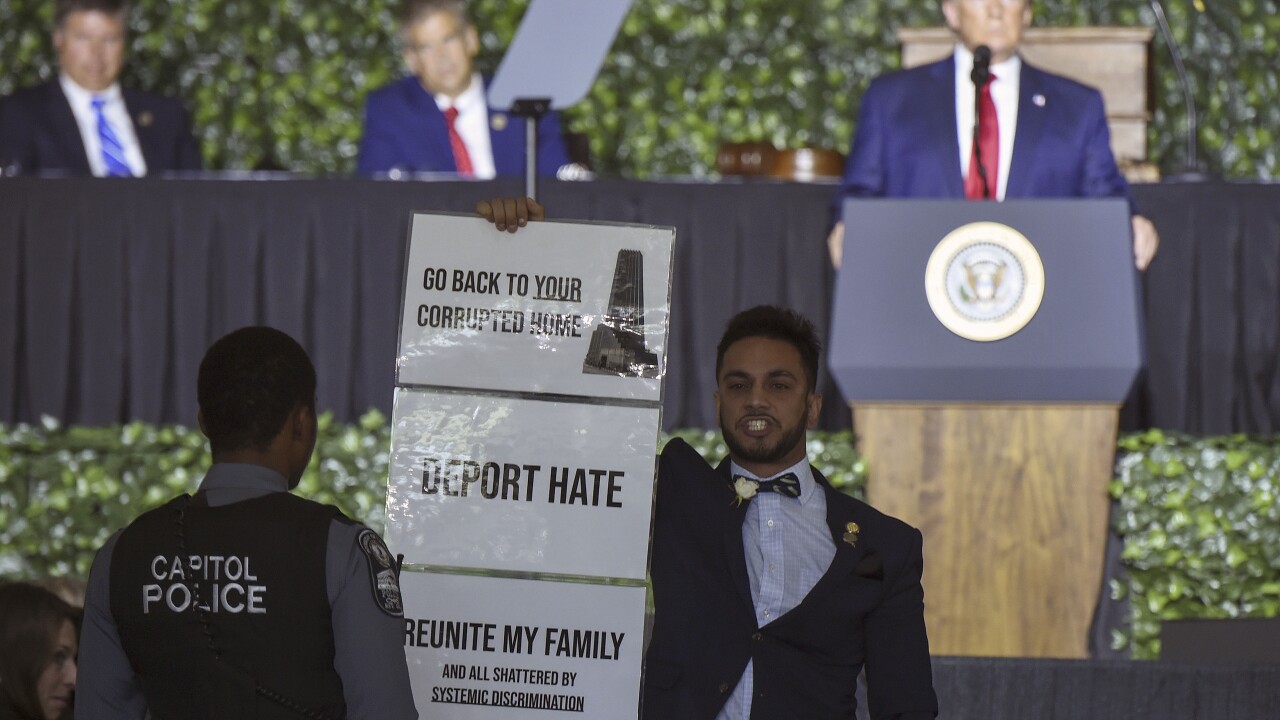 JAMESTOWN, Va. – A Virginia Delegate disrupted President Trump during his speech at the 400th anniversary of a representative legislative body meeting in America.

Delegate Ibraheem Samirah, a democrat of Northern Virginia, says that he disrupted the President’s speech because “nobody’s racism and bigotry should be excused for the sake of being polite.”

The Delegate further explained in a tweet that President Trump should not partake in a celebration of democracy and our nation’s history of immigrants when he is unfit for office.

I just disrupted the @realDonaldTrump speech in Jamestown because nobody's racism and bigotry should be excused for the sake of being polite. The man is unfit for office and unfit to partake in a celebration of democracy, representation, and our nation's history of immigrants. pic.twitter.com/0okD7eRVer

Samirah is an American dentist and politician from Virginia. He was elected to the Virginia House of Delegates for the 86th district in 2019.

President Trump was in the Jamestown Settlement on Tuesday along with many Virginia leaders to attend the commemoration of the 400th anniversary of a representativelegislative body meeting in America.

Democratic lawmakers had previously threatened to boycott the president’s speech. A spokesperson for the Virginia House Democratic caucus said it was up to individual lawmakers to decide if they want to attend.

House Speaker Kirk Cox condemned Delegate Samirah’s protest calling it "disrespectful" and a violation of the rules of the House.

"I am disappointed by Delegate Ibraheem Samirah’s disrespectful outburst during the President’s remarks. It was not only inconsistent with common decency, it was also a violation of the rules of the House," said Cox in a statement.

A press release sent out by Delegate Samirah’s staff read as follows:

Today, Delegate Ibraheem S. Samirah disrupted the Jamestown event because he refused to sit idly by while President Donald Trump, a beacon of hate speech and harmful policy, hijacks a celebration of democratic values he doesn’t even hold. This President has made his true values loud and clear by telling black and brown American citizens to “go back where they came from”, by constantly referring to the places that black and brown people live as “rat-infested” “sh.thol.”, by inciting violence against Muslims, and by demonizing immigrants and comparing them to vermin.

“400 years ago today, a group of undocumented immigrants formed a government to rule this Commonwealth, beginning a centuries long tradition of people from across the world immigrating here for a chance at safety, democracy, and prosperity; my parents, who are Palestinian refuge., included. The fact that the racist-in-chief, who so openly stokes hate against immigrants, was even invited to this event is insulting to Virginians and insulting to the history of our Commonwealth’s democracy.” said Delegate Samirah.

“We have to remember that his rhetoric translates directly into policy. He cages kids. He separates families. He bans Muslims. He deprives people the human right of seeking asylum. And it doesn’t end at the border. He is cutting food stamps, taking away healthcare and environmental protections, giving billions of dollars in handouts to the obnoxiously wealthy, and enabling a systematically-racist criminal justice system.”

“Virginians of all backgrounds can see right through Trump and the Republican General Assembly that embraces him . warmly. They say that it’s disrespectful – that it’s impolite – to disrupt this celebration. But we saw the GOP’s deep disrespect for the people of Virginia when they only entertained go minutes of work in our special session on gun violence prevention, choosing gun lobbyists over Virginian lives. In the same way they politicize the issue of gun violence, Republican’s politicization of the 400th anniversary of our Commonwealth is completely unacceptable.”

“Today, historian John Meacham said to the crowd ‘the story of America is in fact the story of progress.’ I don’t see how anyone can claim to participate in that progress while embracing a man who wants to bring us as far back in time as possible. I will always fight proudly against those who espouse racism and dehumanization. And I am confident that my constituents – my friends and neighbors in Herndon and across ‘Virginia – would rather see me stand up and be heard than sit down, be polite, and passively accept the presence of a man who has sowed fear, division, and hate from the highest office in the land.”