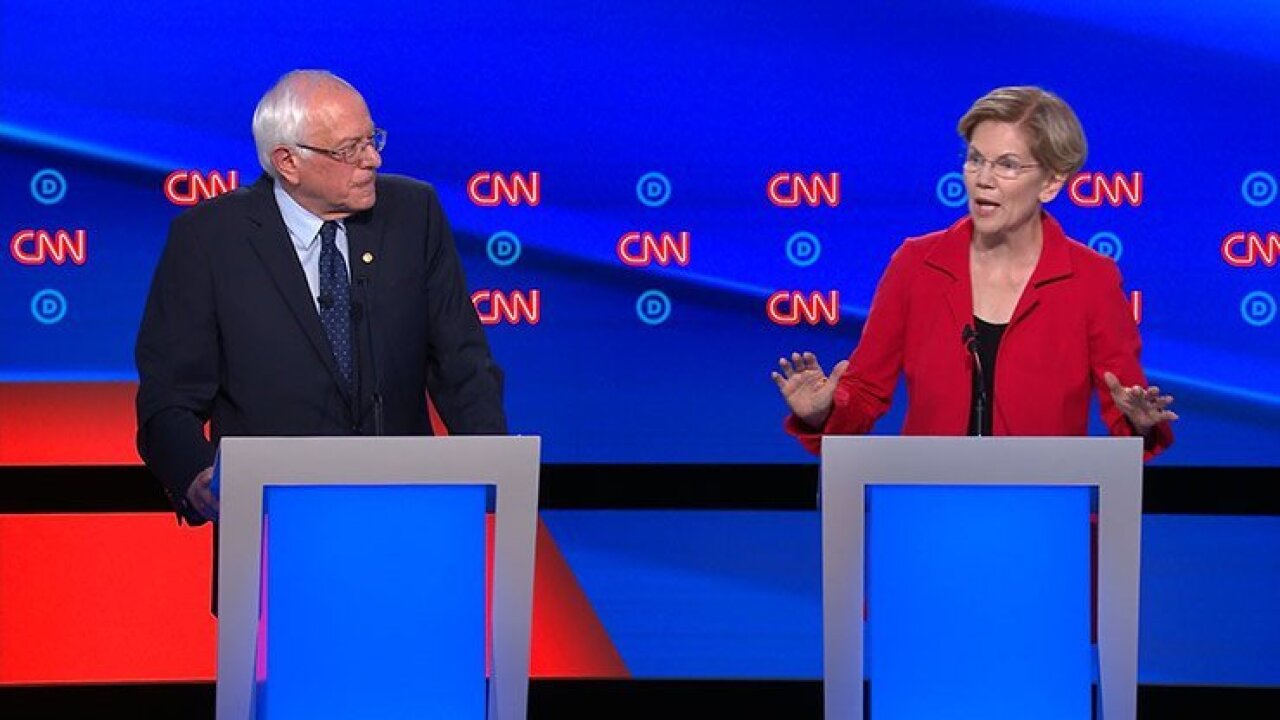 Moderate Democrats put Warren and Sanders in the hot seat out of the gate in Democratic debate.

Elizabeth Warren and Bernie Sanders immediately became the target of more moderate Democrats running for the White House as their rivals argued during the debate Tuesday night that some of their ideas would be too costly and risky for the middle class.

Montana Gov. Bullock, who was appearing on the debate stage for the first time, introduced himself to America as a person who had governed a state that President Donald Trump won. Bullock argued that he knew how to connect with those voters. Within minutes, both he and former Rep. John Delaney, of Maryland, argued vigorously against Warren and Sanders’ full-throated support of “Medicare for All.”

“At the end of the day I won’t support any plan that rips away quality health care from individuals,” Bullock said. “This is an example of wish-list economics. It used to be Republicans that wanted to repeal and replace, now many Democrats do as well.”

RELATED: Your guide to where Democrats stand on the issues

The argument illuminated the stark ideological divide within the Democratic Party.

Since Hillary Clinton’s loss to Trump in 2016, Democrats have carried on an internal debate about whether they must do more in 2020 to attract the more centrist, white working-class voters who cast ballots for Trump or if they should embrace a bold agenda that would dramatically restructure government by enacting proposals like Medicare for All and the Green New Deal.

And it didn’t take long for Warren and Sanders to fight back and defend their side of the ideological divide with gusto.

“I don’t understand why anybody goes to all the trouble of running to the president of the United States to talk about what we really can’t do and shouldn’t fight for. I don’t get it,” Warren said in response to Delaney. “Our biggest problem in Washington is corruption. It is giant corporations that have taken our government and that are holding it by the throat, and we need to have the courage to fight back against that and until we’re ready to do that, it’s just more of the same. Well, I’m ready to get in this fight. I’m ready to win this fight.”

Sanders added, “To win this election and to defeat Donald Trump — which by the way, in my view is not going to be easy — we need to have a campaign of energy and excitement and of vision. We need to bring millions of young people into the political process in a way that we have never seen by among other things, making public colleges and universities tuition free and canceling student debt.”

Medicare for All takes the spotlight in the Motor City

Tuesday’s debate is taking place in Detroit, the largest city in the battleground state of Michigan. It’s a place Democrats are working hard to flip after losing it to Trump by a narrow margin in 2016 — the first time the state had gone to a Republican since 1988.

That setting provided an opening for some of the lesser-known moderates in the race, some of whom are hanging on by a thread already as they fight to keep their campaigns alive. In the opening stages of the debate, that was obvious in how some candidates attacked the progressive Medicare for All position.

Delaney noted that his father was a union worker for many years to earn his health care, and that he and many other Americans would not want Democrats completely restructuring the system. He charged that Sanders’ “math” was wrong.

Author Marianne Williamson noted that she often agrees with Warren and Sanders on policy issues but not on Medicare for All.

“I’m normally way over there with Bernie and Elizabeth, but on this one. I hear the others,” she said.

One terse exchange between Sanders and Ohio Congressman Tim Ryan unfolded as Sanders was questioned about the estimated 600,000 union members in Michigan who would be forced to give up their private health insurance plans if Medicare for All were enacted.

“Can you guarantee those union members that the benefits under Medicare for All will be as good as the benefits that their union reps fought hard to negotiate?” moderator Jake Tapper asked.

“They will be better because Medicare for All is comprehensive and covers all health care needs for senior citizens, it will finally include dental care, hearing aids and eyeglasses –,” Sanders said.

“I do know!” Sanders responded sharply. “I wrote the damn bill.”

Ryan, undeterred, continued to make the point about union workers.

“Sen. Sanders does not know the union contracts in the United States,” Ryan said. “I’m trying to explain that these union members are losing their jobs. Their wages have been stagnant. The world is crumbling around (them). The only thing they have is possibly really good health care, and the Democratic message is going to be — we’re going to go in, and the only thing you have left, we’re going to take and do better. I do not think that’s a recipe for success for us. It’s bad policy and it’s certainly bad politics.”

Candidates seek to break out

Some lower-tier candidates sought to create viral moments that could buoy their struggling campaigns in the latter stages of the debates.

Among them was Williamson, who drew cheers with answers on the Flint water crisis and on reparations for slavery.

“The entire conversation that we’re having here tonight, if you think any of this wonkiness is going to deal with this dark psychic force of the collectivized hatred that this President is bringing up in this country, then I’m afraid that the Democrats are going to see some very dark days,” she said.

Former Texas Congressman Beto O’Rourke had perhaps one of his strongest answers of the debate when talking about race relations in America.

“I want to acknowledge something that we’re all touching on, which is the very foundation of this country, the wealth that we have built — the way we became the greatest country on the face of the planet — was literally on the backs of those who were kidnapped and brought here by the legacy of slavery and segregation and Jim Crow,” O’Rourke said, “and suppression is alive and well in every aspect of the economy and country. Today as president I will sign into law a new voting rights act. I will focus on education, address health care disparities and also sign into Sheila Jackson Lee’s reparations bill so we can have the national conversation we waited too long in this country to have.”