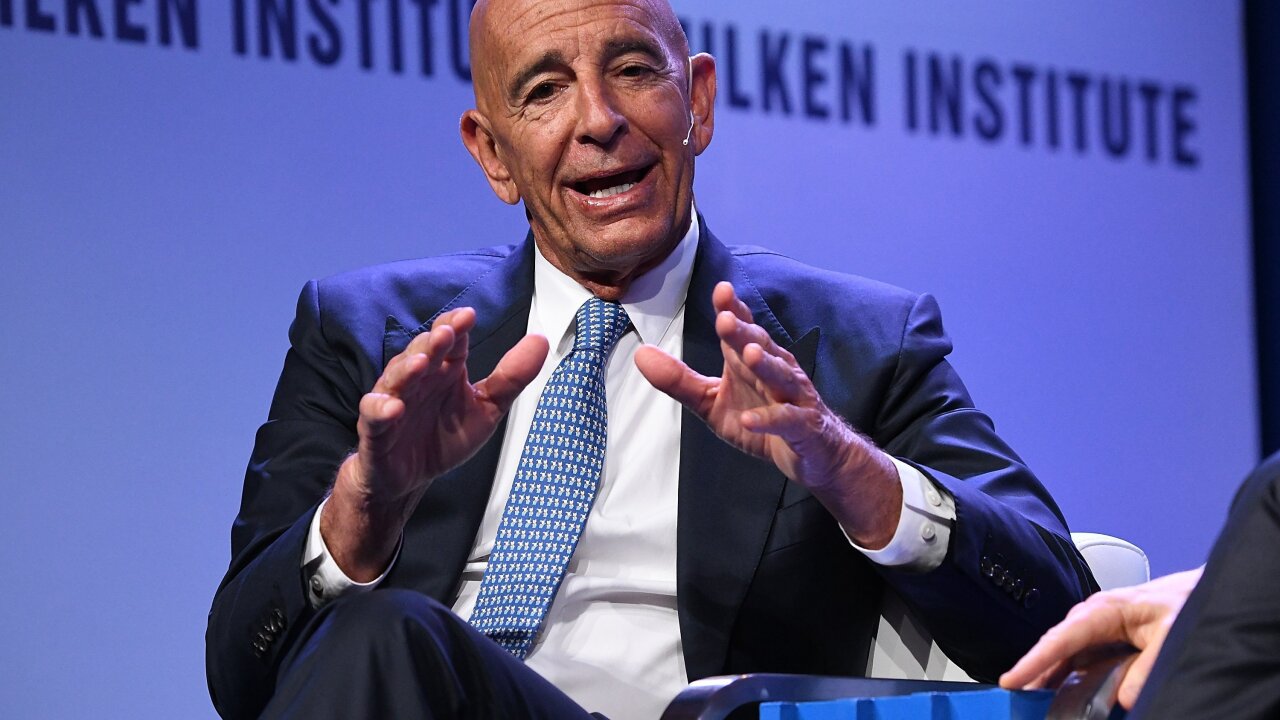 A close friend and confidant of President Donald Trump has been leveraging his influence within the administration to push a lucrative business deal involving the transfer of US nuclear technology to Saudi Arabia while, at times, standing to profit from the proposal, according to aides on a key congressional committee.

The new report drafted by Democrats on the House Oversight Committee, which is based on more than 60,000 pages of new documents — including text messages and emails — was released Monday. The report offers evidence that Tom Barrack, who served as chairman of Trump’s inaugural committee, coordinated with private executives in an effort to secure the President’s support for the deal and lobbied for the transfer of nuclear technology to Saudi Arabia absent existing controls on how those materials could be used.

It also states that contacts between those executives and high-level White House officials “continues to the present day”, noting that Trump’s son-in-law and senior adviser, Jared Kushner has met with officials from one company in question despite concerns.

“Overall, the new documents obtained by the Committee reveal that, with regard to Saudi Arabia, the Trump Administration has virtually obliterated the lines normally separating government policymaking from corporate and foreign interests. The documents show the Administration’s willingness to let private parties with close ties to the President wield outsized influence over U.S. policy towards Saudi Arabia,” the report states.

“These new documents raise serious questions about whether the White House is willing to place the potential profits of the President’s friends above the national security of the American people and the universal objective of preventing the spread of nuclear weapons,” it says.

Monday’s report states that Barrack and officials from “International Peace Power & Prosperity,” known as IP3 — a private company founded by former US generals — have maintained “unique access” within the Trump administration for years dating back to 2016, prior to the President’s inauguration.

House Democrats say that the new documents shows how Barrack and private business leaders sought to use their influence within the Trump administration to promote “the interests of US corporations seeking to profit from the transfer of nuclear technology to Saudi Arabia.”

“New documents show that Mr. Barrack negotiated directly with President Trump and other White House officials to seek powerful positions within the Administration—including Special Envoy to the Middle East and Ambassador to the United Arab Emirates—at the same time he was (1) promoting the interests of U.S. corporations seeking to profit from the transfer of nuclear technology to Saudi Arabia; (2) advocating on behalf of foreign interests seeking to obtain this U.S. nuclear technology; and (3) taking steps for his own company, Colony NorthStar, to profit from the same proposals he was advancing with the Administration,” the report says.

According to documents cited in the House report, nuclear executives claimed members of the Trump cabinet, including Secretary of State Mike Pompeo and former Secretary of Defense James Mattis, approved of elements of their plan.

The New York Times reported on Sunday that federal prosecutors have questioned Barrack about his lobbying efforts, including interactions with contacts from the United Arab Emirates and Saudi Arabia about Trump’s energy policy, including specific instances also detailed in the House Oversight report.

Barrack has not been accused of any wrongdoing and his spokesperson maintains that he has been cooperating with the House Oversight Committee.

“Tom Barrack has been cooperating with the Committee on Oversight and Reform of the U.S. House of Representatives and has provided the documents the Committee requested. Mr. Barrack’s engagement in investment and business development throughout the Middle East for the purpose of better aligned Middle East and US objectives are well known, as are his more than four decades of respected relationships throughout the region,” a spokesperson for Barrack told CNN in a statement.

“Mr. Barrack’s consistent attempts to bridge the divide of tolerance and understanding between these two great cultures is etched in the annals of time. This is not political it is essential. Mr. Barrack has never had a position in the Trump administration,” the statement says.

The Trump administration’s relationship with Saudi Arabia has drawn scrutiny because of the President’s personal business dealings in the region and the President’s refusal to accept his intelligence community’s findings on the murder of Saudi journalist Jamal Khashoggi.

The CIA concluded that Saudi Crown Prince Mohammed bin Salman personally ordered the killing of Khashoggi, despite the Saudi government’s denials that the de facto ruler was involved, according to a senior US official and a source familiar with the matter.

CNN reported earlier this year that whistleblowers had warned lawmakers about efforts inside the White House to rush the transfer of US nuclear technology to Saudi Arabia.

That report, and the committee’s findings released Monday, suggest private companies lobbied the administration to ease the requirements for transferring nuclear technology with the help of influential allies of the Trump administration, including Barrack and former national security adviser Michael Flynn.

That process has been governed by what is called a “123 Agreement” — known as the gold standard — which lays out how Saudi Arabia should comply with nonproliferation requirements.

The White House and State Department did not immediately respond to CNN’s request for comment.

But the private parties attempting to sway the administration’s nuclear transfer policy called this agreement a “total roadblock” and warned that Saudis would choose other countries to partner on with their program if the US demanded such controls, according to the report.

The report states that Barrack and officials from “International Peace Power & Prosperity,” a private company founded by former US generals and reveals additional details about the lobbying campaign, have maintained “unique access” within the Trump administration for years dating back to 2016, prior to the President’s inauguration.

“The new documents obtained by the Committee show that the unique access that Mr. Barrack and IP3 officials enjoyed with the Trump Administration yielded promises from high- level government officials to support IP3’s efforts with Saudi officials. After meeting personally with President Trump in February of this year, IP3’s Chief Executive Officer explained to other industry executives, “This needs to be a Military like campaign and that’s what we intend to build,” it says.

The report notes specific exchanges between Barrack and Rashid al-Malik, a businessman from the United Arab Emirates who has “reported to UAE intelligence about aspects of the Trump administration’s Middle East policy,” which occurred prior to a major energy speech by Trump scheduled on May 26, 2016.

Documents show Barrack shared a draft of that speech with al-Malik, who “circulated the draft among Emirati and Saudi officials.” Al-Malik then passed suggestions back to Mr. Barrack, who conveyed them to Trump campaign chairman Paul Manafort,” according to the report.

That coordination is also of interest to federal investigators who are looking into whether Barrack violated any laws related foreign campaign influence, the New York Times reported Sunday.

Monday’s report also offers new details related to Barrack’s lobbying efforts, including how he and IP3 officials attempt to leverage their influence within the administration in 2017 to purchase Westinghouse Electric Company, the only US manufacturer of large-scale nuclear reactors– using significant Saudi and Emirati capital.

“Mr. Barrack, his company, and IP3 discussed plans to join with the Saudi Public Investment Fund (PIF) and other Middle East financial interests to bid for Westinghouse at the same time they sought and obtained support for this acquisition strategy at the highest levels of the White House,” the report states.

It notes those efforts continued throughout 2018 and that “IP3’s efforts to influence the Trump Administration and profit from transfer of U.S. nuclear technology to Saudi Arabia continue to this day.”

There have been some roadblocks in IP3’s push to get the administration fully on board with their plan.

In March, an assistant to Trump’s current national security adviser, John Bolton had to cancel a meeting with IP3 for legal and ethical reasons.

“Please let everyone know there are legal and ethical concerns about Amb. Bolton’s taking this meeting and we need to pull it down for now,” wrote Bolton’s assistant in an email.

At that time NSC Legal Adviser John Eisenberg had already twice instructed all NSC staff to cease working on the IP3 plan because of conflicts of interest and necessity to adhere to federal law.

The legal instructions, however, did not prevent Trump from meeting with IP3.

Trump met with nuclear industry executives at the White House, in a meeting that was orchestrated by IP3, in February of this year.

The reports say Kushner has kept in with IP3 and its allies, including Westinghouse.

It reveals that in setting up one of the meetings with Kushner and Westinghouse, Barrack texted Kushner. It is unclear if the text went to an official or a personal cell phone of Kushner, or if there were steps to preserve the text, as the Presidential Records Act requires.

There have also been emails sent to Trump administration officials’ personal emails, the report notes.

The IP3 CEO and cofounder, Admiral Michael Hewitt, sent a position paper to David Banks — a White House official who was fired because he could not get a security clearance — in 2017. It is also unclear if Banks preserved that email as he is required to do legally.

IP3 has boasted of cabinet officials’ support as they have sought to secure meetings with other cabinet officials. In 2017 Commerce Secretary Wilbur Ross met with an IP3 advisor, William Nitze.

In the lead-up to that meeting Ross’ scheduler pressed that both Pompeo and Mattis have “been briefed” on the Middle East nuclear plan created by IP3, and “have given it their full support.” While it is unclear when and how Pompeo and Mattis expressed their support, IP3 was touting it as fact.

“The Committee’s first interim staff report explained that whistleblowers inside the White House expressed alarm about corporate interests attempting to use their influence with the Trump Administration to bypass these concerns in order to serve their own financial interests in building nuclear reactors in Saudi Arabia. The Committee received documents bolstering the whistleblowers’ accounts and showing frequent communications between these corporate interests and Trump Administration officials,” the report says.

“New documents show that in 2016, General Flynn informed his business partners about upcoming interactions with officials in Russia and the Middle East — including Russian President Vladimir Putin and then-Saudi Deputy Crown Prince MBS — and offered to use these contacts to further IP3’s business interests,” the report notes.

White House counsel Pat Cipollone sent a letter to the committee in April of this year acknowledging that Congress does have a role in the transfer of nuclear technology, but he claimed “that role is not to scrutinize the Executive’s communications with foreign leaders or internal White House communications about US nuclear energy policy while the negotiation process remains ongoing.”

Cipollone also wrote that “the fact that communications involve individuals outside the Executive Branch does not undermine the President’s confidentiality interests.”

The State Department did not reply to request for an update as to the ongoing discussions with Saudi Arabia on the nuclear development topic. Assistant Secretary of State for International Security and Nonproliferation Chris Ford has been a key player in the ongoing discussions. The report says that he met with IP3 executives, last year.

“We had a good meeting with State yesterday, sharing our perspectives on how to best move forward in KSA. Assistant Secretary Chris Ford and Assistant Secretary Manisha Singh both attended. They now have a much better and more holistic understanding of how U.S. industry can best participate while also improving our national interests. They have requested that we brief Commerce again and potentially submit an independent advocacy request for services beyond the technology selection,” IP3 President Stuart Solomon wrote to industry executives.