The Emmett Till memorial where students posed with guns is gone. A bulletproof sign will soon replace it 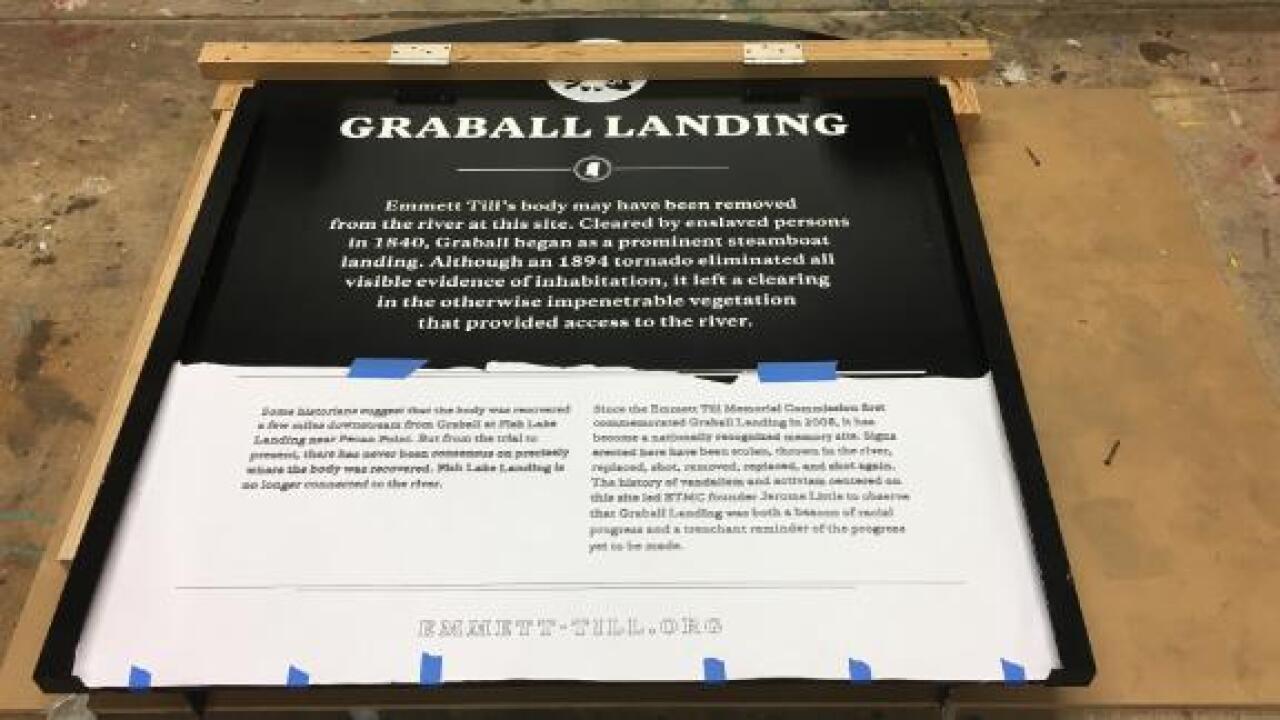 MONEY, Miss. — A bullet-riddled memorial sign for Emmett Till at the center of a photo showing three white University of Mississippi students posing with guns is now gone.

It has been vandalized multiple times over the years and, in a few months, the sign will be replaced again — this time with a bulletproof marker.

The sign was placed near the spot where Till’s body was pulled from the Tallahatchie River in 1955. The 14-year-old African American was tortured and killed by two white men after accusations that he flirted with a white woman. His death became an important catalyst in the civil rights movement.

Patrick Weems, the executive director of the Emmett Till Memorial Commission, said the group began to mark every site that was part of Emmett’s story after community leaders offered his family an apology for the first time about 10 years ago.

“For 50 years our community didn’t want to talk about Emmett Till, they just wanted to forget it,” Weems said.

The 50-pound purple marker was removed a few days ago when the commission learned the Mississippi Center for Investigative Reporting and ProPublica were publishing a story aCovil long with a photo of the three University of Mississippi students, Weems said.

The students have been suspended by their fraternity and the Justice Department’s Civil Rights Division is also reportedly investigating.

It’s not the first time the sign has seen trouble.

The first sign went up along the river in 2007 and was stolen the following year. No arrests were ever made. When the marker was replaced, it was riddled with bullet holes. In 2018, a third sign was put up at the site but only 35 days went by before it was shot up again.

The sign will be replaced in October with a nearly 600-pound sign made of reinforced steel, according to Matt Dilling, founder of Lite Brite Neon Studio in Brooklyn who has been working to create the sign.

And this time, the sign is expected to be bulletproof.

“We won’t’ stop. There will be another sign up,” said Rev. Willie Williams, the commission’s treasurer. “This particular area will go forward in the long run. Because this legacy and this story, it’s much bigger than any of us.”

The commission is asking local authorities to launch an investigation into the students’ photo. Members said they don’t know whether the students damaged the sign or just posed in front of it.

As Weems walked around the remote site where the marker once stood Friday, he said the vandalized signs have brought him both frustration and hope.

“And the hope is that there are people around this country who care about this story,” Weems said. “That Emmett Till did not die in vain. His mother didn’t allow him to die in vain. And we have a sacred oath to make sure that these sites go back up.”