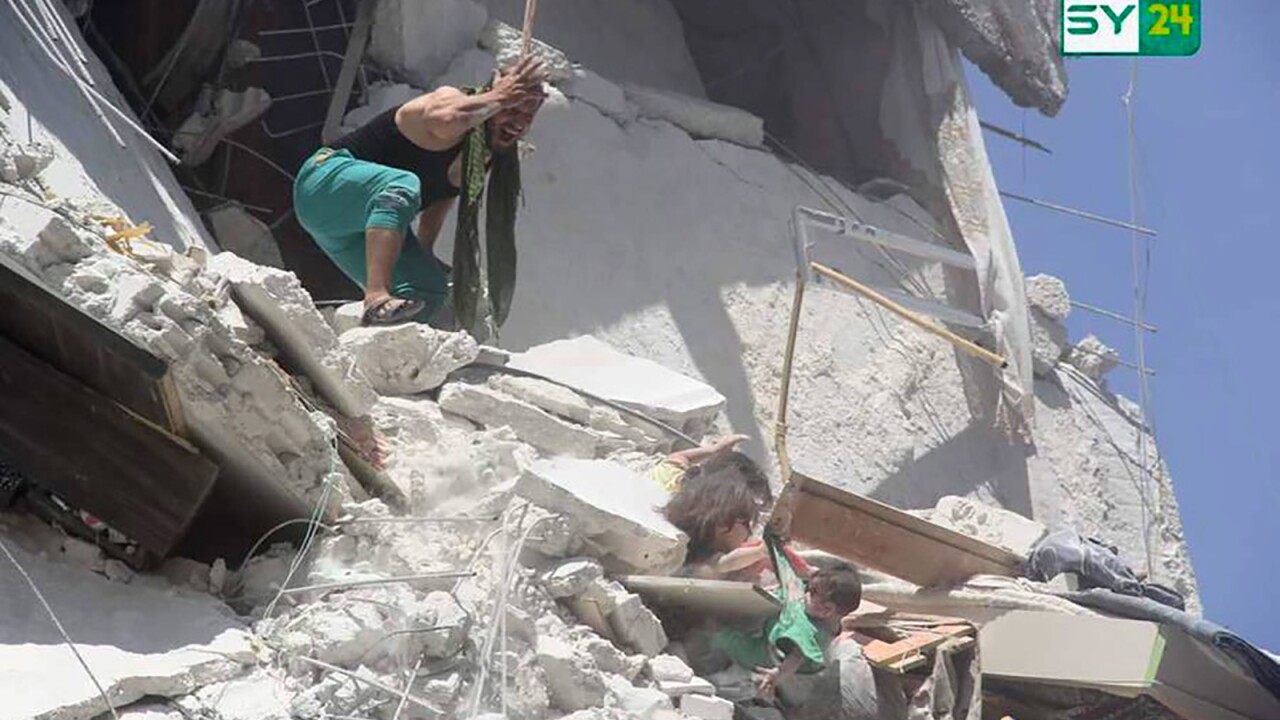 A father looks with horror at his three young daughters, teetering on the destroyed edge of a bombed building in northern Syria. One of them, Reham, 5, grabs the shirt of her 7-month-old sister Tuqa in an attempt to save her from falling from the rubble.

This desperate moment is captured in a heart-stopping image taken on Wednesday in the Syrian town of Ariha, Idlib province, by a local media activist group, SY24. It reveals the aftermath of an airstrike conducted by Syrian government forces.

In recent days, scores of civilians have become the victims of the government’s Russia-backed offensive to regain control of the last rebel strongholds in Northwestern Syria.

Reham hit her head on a stone when she fell and died while receiving treatment in the ambulance, according to the White Helmets, a volunteer rescue group also known as the Syria Civil Defense.

Tuqa, the infant in the photograph, survived. She received media treatment and has been discharged from the hospital, according to the Syrian American Medical Society (SAMS) Foundation.

The third sister, 3-year-old Rawan, pictured in the photo standing behind Reham, died on Friday in the hospital, SAMS said.

The children’s mother also died when the strike hit the building where the family of 12 were living, the White Helmets said, adding that four other children are continuing to receive treatment for their injuries.

Over the past two months, Syria’s government has intensified air attacks on Idlib and surrounding areas — the last remaining areas controlled by the opposition. Hundreds of civilians have been killed and tens of thousands are believed to have been displaced, according to the Syrian Observatory for Human Rights.

At least 450 civilians have died over the last three months since the start of the Syrian government’s campaign, the office of the UN High Commissioner for Human Rights said in a statement Friday. More than 100 people have been killed by airstrikes over the past ten days alone, the UN said.

The last few weeks have been particularly deadly for children, according to organizations operating in the area.

More children have been killed in the last four weeks in Idlib province than the total number killed during 2018 in the same area, the charity Save the Children and its partner organization Hurras Network said in a statement released on Wednesday.

At least 33 children have been killed since June 24, compared to 31 children killed during all of 2018, the charity said.

“The current situation in Idlib is a nightmare. The injuries we are seeing are horrific,” Sonia Khush, Save the Children Syria’s response director said in a press release. “It’s clear that once again children have been killed and injured in indiscriminate attacks.”

Since the violence escalated at the end of April, at least 400 people — including 90 children — have died, estimates Save the Children.

The UN High Commissioner for Human Rights Michelle Bachelet said in a statement that she is concerned that “the carnage” in Syria “is no longer on the international radar,” and called the international community’s response “a collective shrug.”

“This is a failure of leadership by the world’s most powerful nations, resulting in tragedy on such a vast scale that we no longer seem to be able to relate to it at all,” Bachelet said.

“It is essential that there is a cessation of hostilities in order to give the on-going political negotiations room to breathe,” she said. “The alternative is just more mindless death and destruction in a war without end.”

In an emotional Facebook video posted earlier this week, one Syrian-American woman, Rania Kisar said: “Mr Trump, please stop this. Stop this shelling. Stop the killing of these innocent people,”

Standing amid rubble after an airstrike in the city of Maarat al-Numan, Kisar said, “Please America. Please do something,” before breaking into sobs.

CNN has reached out to the White House for comment.

Local hospitals have closed out of fear of being attacked and 94 schools are being used as shelters, according to the UN.

“These attacks don’t just claim innocent lives,” said Lowcock. “They also deprive thousands of civilians of basic health services, even as fighting intensifies around them,” he added, calling the attacks on civilian infrastructure “appalling.”

Over 5.6 million people have fled Syria since 2011, and millions more have been internally displaced, according to the latest UN numbers, as hope for peace and normalcy fades.