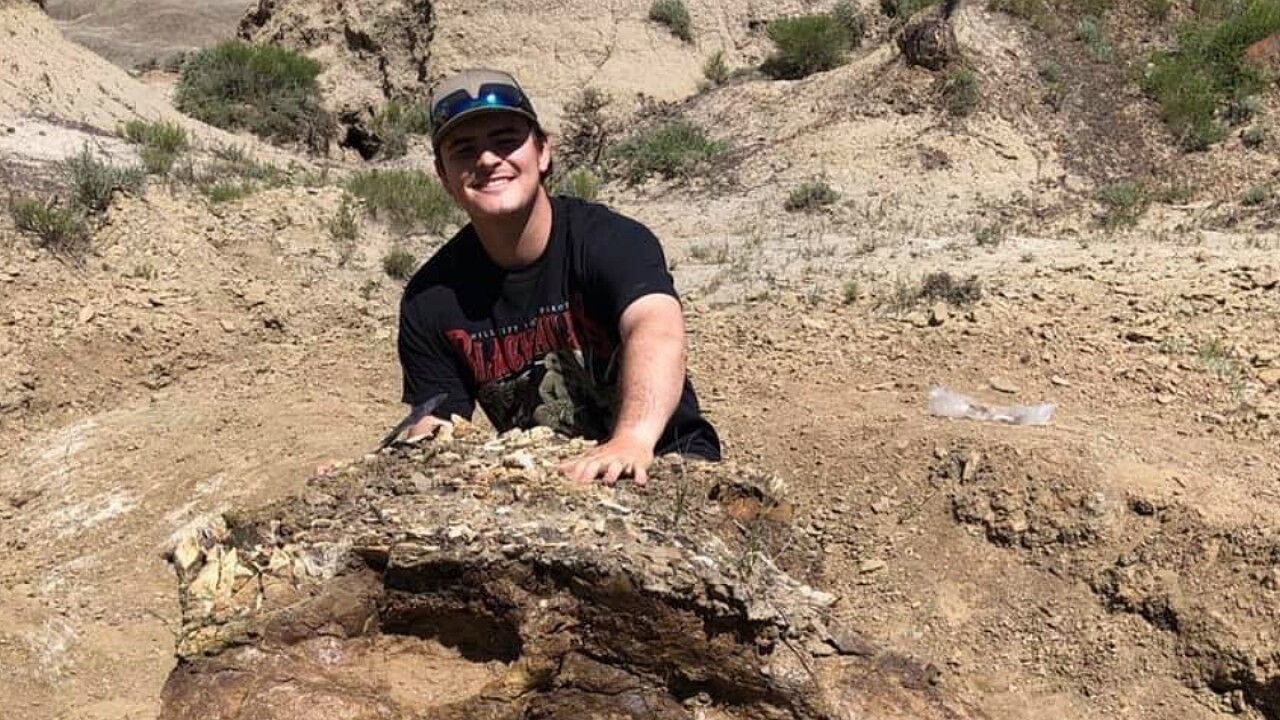 Harrison Duran uncovered the 65 million-year-old skull in the badlands of North Dakota. (CNN)

A college student made the discovery of a lifetime on a recent paleontology dig when he unearthed a partial Triceratops skull.

Harrison Duran, a fifth-year biology student at the University of California, Merced, uncovered the 65 million-year-old skull in the badlands of North Dakota.

“I can’t quite express my excitement in that moment when we uncovered the skull,” Duran said in a news release from the school on Wednesday. “I’ve been obsessed with dinosaurs since I was a kid, so it was a pretty big deal.”

North Dakota is part of the Hell Creek Formation, and this area is a treasure trove for finding fossils. The rock bed formation spans four states — Montana, North Dakota, South Dakota and Wyoming. Fossils date to the late Cretaceous period, 65 million to 70 million years ago, and were discovered in 1902 by paleontologist Barnum Brown.

Knowing the history of the area, Duran set out on a two-week dig accompanied by Michael Kjelland, an experienced excavator and professor at Mayville State University in North Dakota. The two met previously at a conference and became fast friends as they bonded over their passion for dinos.

“I have been going out to the badlands for years off and on, but to this particular site it was the first time,” Kjelland told CNN. Last year, he found another Triceratops skull around the same area that is currently being excavated.

They started their dig on June 1 chiseling away at the rock and dirt in hopes of finding some treasure. By the fourth day, Duran struck gold.

The fossil was found upside down with the base of its left horn partially exposed, surrounded by plant fossils also from the Cretaceous era.

“It is wonderful that we found fossilized wood and tree leaves right around, and even under, the skull,” said Duran. “It gives us a more complete picture of the environment at the time.”

They named the dinosaur Alice, after the landowner.

Then the painstaking work of getting Alice out of the ground began.

“It took a full week to excavate Alice, whose fragile skull was meticulously stabilized with a specialized glue to solidify the fractured, mineralized bones, before an accelerant was applied to bond the structures,” UC Merced said in a news release.

Once out of the ground, the fossil was coated in foil and plaster, put in a box and wrapped in a memory foam mattress for transportation to the lab for further research.

Harrison Duran, a fifth-year biology student at the University of California, Merced, uncovers the 65 million-year-old skull in the badlands of North Dakota. (CNN)

The duo founded a nonprofit company, Fossil Excavators, to discover, persevere and educate others about fossils. Their organization will be conducting more research on Alice and preparing the dinosaur for display. Duran and Kjelland hope to use the fossil as an educational tool for others.

“It would be amazing for UC Merced to be able to display Alice on campus,” said Duran. “It’s such a rare opportunity to showcase something like this, and I’d like to share it with the campus community.”

Meanwhile, the exact location of the dig sites will remain secret. “There have been people in the past who have stolen dinosaur bones,” Kjelland said in the news release.

Kjelland told CNN that he anticipates more bones will be uncovered at the site where Alice was discovered, as well as the site where he found a Triceratops skull last year.

Several weeks ago, construction workers digging near a Denver, Colorado, retirement home found an adult triceratops buried in the bedrock — and the fossils were 68 million years old.