Volunteers from Virginia shelter in place as Barry makes landfall 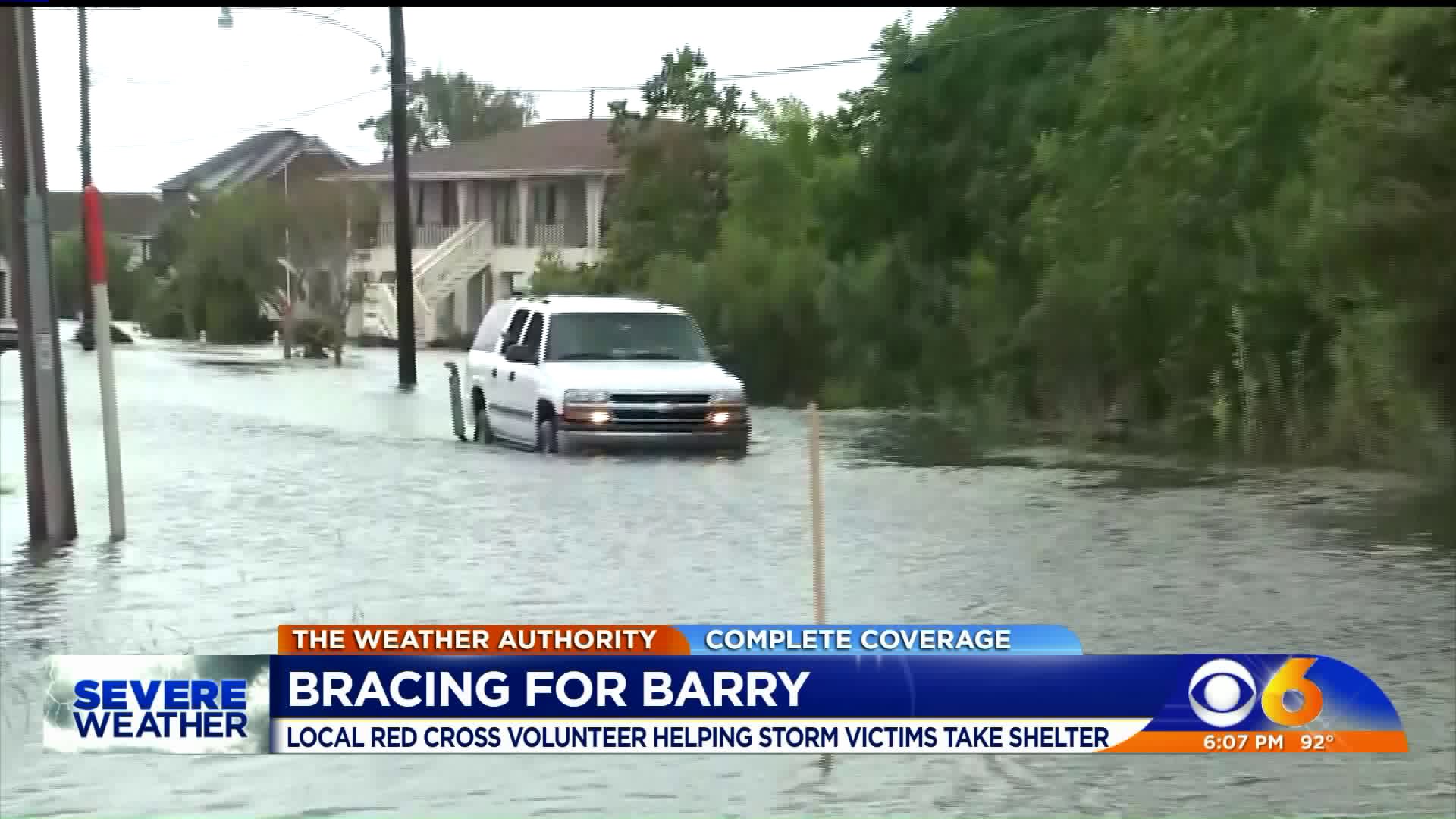 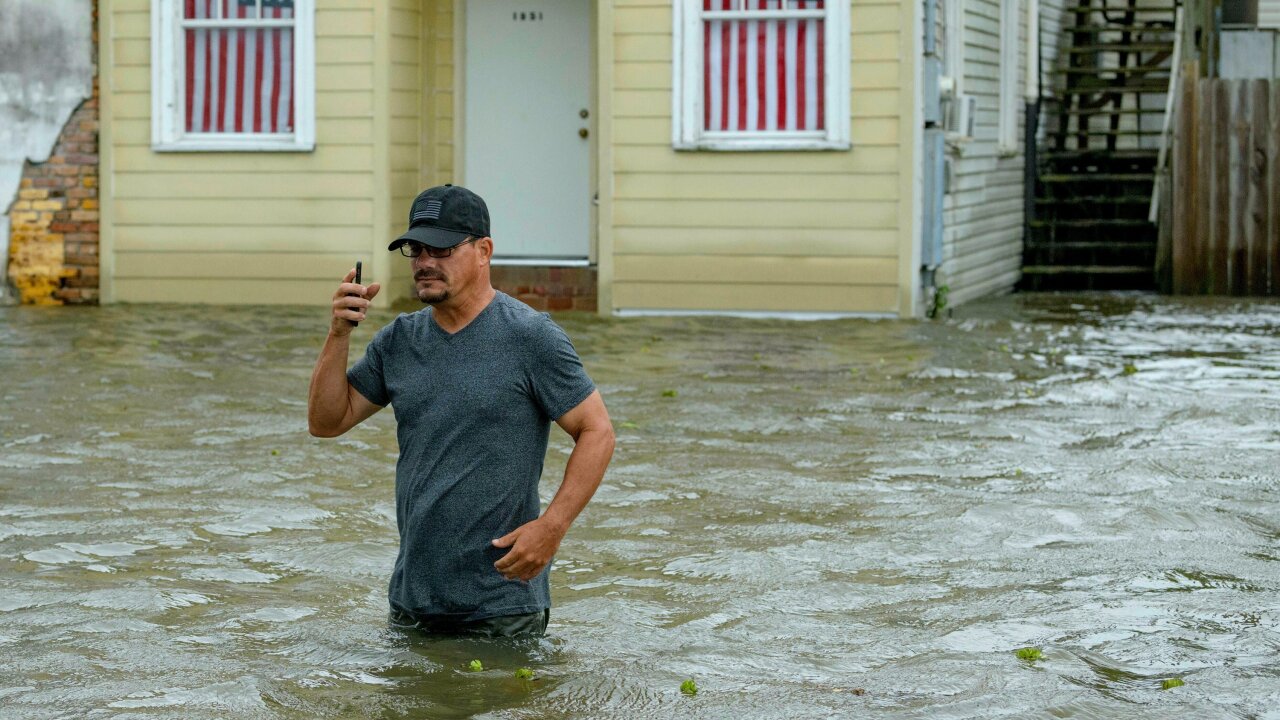 Barry made landfall as a Category 1 hurricane early Saturday afternoon along Louisiana's central coast, then immediately weakened back into a tropical storm, according to the National Hurricane Center.

The center of the storm -- the first hurricane to hit the United States this year -- was about 20 miles west-southwest of Lafayette at 5 p.m. ET and crawling north-northwest at 7 mph, with maximum sustained winds of 65 mph.

The storm is expected to weaken even further, the National Hurricane Center said, and was expected to become a tropical depression on Sunday.

But it was the rainfall that always posed the greatest threat, regardless of whether the storm was a hurricane or a tropical storm. Barry's slow trek inland means residents from the Gulf Coast through the lower Mississippi Valley will see extended downfalls that could prompt heavy flooding, forecasters have said.

"When we woke up this morning, the entire street and area under the house was under water," he told CNN. "The waves from the lake are crashing onto the land as if it is all one big lake."

"We're stuck in the house with four kids, and the car is almost flooding," Torri said, noting that within an hour and a half, the water had risen a foot. "The wind's getting stronger, and the water is rising and rising."

Though heavy, sustained rain still threatens the New Orleans area, fears among residents and forecasters there relaxed as a predicted storm surge on the unusually high Mississippi River happened late Friday at a lower level than anticipated, according to the National Weather Service in New Orleans.

The developing factors had called to mind for some the death and destruction wrought in 2005 by Hurricane Katrina, though the weather and flood-infrastructure circumstances are not the same.

Volunteers from Virginia shelter in place

Patty Valadka, a registered nurse and volunteer with the Red Cross of Virginia, was headed to Lafayette from Baton Rouge to help set up a shelter when the storm changed her plans.

“We’re flying out the hotel with our suitcases and throwing them in the car. I get the call that you need to cancel everybody,” Valadka said. “We’re not going to Lafayette. You need to shelter there.”

Valadka said there was no sign of the storm letting up as of Saturday afternoon.

“Our rain is picking up quite a bit, the wind is picking up,” she said. “This rain is already saturated. New Orleans has already flooded.”

Valadka said the primary focus for volunteers will be getting the shelters up and running so they can help as many people as possible.

"Moment by moment, things can change on a dime and that's exactly what has happened today," Valadka explained.

The real danger is the rain

Storm surge warnings along the coast extended from Intracoastal City, south of Lafayette, to Biloxi, Mississippi, and along Lake Pontchartrain.

Tropical-storm-force winds extended up to 175 miles outward from the storm's center.

More than 100,000 customers across Louisiana were without power Saturday morning, utility providers said. Hundreds of flights in New Orleans were canceled, and some cruise ship departures were in flux.

But as Barry heads north, officials' main concerns are the heavy rains and related flooding the storm is expected to usher in.

"Ninety-five percent of this storm is still in the Gulf of Mexico," CNN meteorologist Chad Myers said Saturday evening. As the storm continues to move north, more of the system will hover over land. "And that's where the rain is going to come from."

"The real danger in this storm was never about the wind anyway," Louisiana Gov. John Bel Edwards said. "It's always been about the rain, and that remains a very significant threat."

Levees were overtopped Saturday in Plaquemines Parish, southeast of New Orleans, where mandatory evacuations were instituted for residents in low-lying areas earlier this week. It was not a levee for the Mississippi River, Gov. Edwards said, but a back levee near Myrtle Grove.

"We actually anticipated that the back levee would be overtopped," he added, "so we are not surprised by what has happened."

The overtopping occurred in multiple locations, but in less populated areas of the parish, Parish President Kirk Lepine said Saturday. He added there was concern that Highway 23 could be inundated with water and that residents who had not left the area would be unable to do so.

Residents are assured pumps are working and capable

Officials had warily eyed the Mississippi River earlier this week, when forecasts showed a potential storm surge of 2 to 3 feet could push the waterway's height to about 19 feet in New Orleans, frighteningly close to the top of levees that protect up to 20 feet.

But those fears have calmed since late Friday, when the surge crest pushed the river to only 16.9 feet. The risk of overtopping was minimal, the New Orleans Office of Homeland Security and Emergency Preparedness said.

Barry's heavy rain is predicted to push the river level up again Monday, but only to 17.1 feet, forecasters said. Kevin Lykins, a resident of Magazine Street, mere blocks from the river, said he wasn't concerned about the Mighty Mississippi at all.

"We are just hoping the pumps work," he said, referring to the citywide system of massive pumps, canals and underground pipes that move water off streets and into nearby waterways. "We really aren't worried about the (river) levees over here. We are more worried about the rain and flooding and hoping our city officials have our pumps ready to go."

Residents were reassured Saturday that the city's pumps are working, even if it looks like floodwater is standing still.

"It takes a long, long time for the water to recede," Sewerage and Water Board Executive Director Ghassan Korban said, comparing the city to a full bathtub and its drainage pump system to the plug. It takes a while for the water to go down once the plug has been pulled, he said, but it's working.

In Morgan City, about 55 miles east of where the hurricane made landfall, officials and city workers were also worried about lingering water. The fishing and oil hub is about 70 miles southwest of New Orleans and south of Lafayette.

With up to 30 inches of rain projected this weekend for the region, Morgan City Mayor Frank "Boo" Grizzaffi worried it may be more than the city's drainage system can take, so the city contacted the state and got additional pumps to help tackle the deluge.

"Our city can handle the first 5 inches comfortably," he told CNN, standing along the seawall Saturday morning. "After that, 1 inch every additional hour. So, when you've got a forecast of 30 inches, the math doesn't work."

But Grizzaffi was confident the city could handle whatever Barry throws its way.

"There's a lot of rain coming. Someone's going to get it," he said. "We're prepared for it if it comes this way."

Across the region, cities and parishes have issued mandatory evacuation orders, especially in low-lying areas and those outside public levee protection, along with voluntary evacuation warnings for other places, the governor said. For the first time since their construction, all major floodgates on the Mississippi River are closed, he added.

The state's forces also have mobilized in anticipation of search and rescue missions, he said.

More than 300 households along Highway 315 and Brady Road were put under mandatory evacuation orders Saturday afternoon in Terrebonne Parish, parish spokesman Mart Black told CNN. It was unclear how many residents would be impacted.

At least a dozen people had to be rescued in the coastal parish Saturday morning, the US Coast Guard said. About a dozen people were saved along Island Road, including four people and a cat who were picked up by a MH-65 Dolphin helicopter and taken inland to Houma, Louisiana.

A 24-foot Coast Guard response boat was launched from Morgan City to help with rescues.

Following President Donald Trump's state of emergency declaration, Louisiana officials activated 3,000 National Guard members in anticipation of Barry, the governor said. And despite the state's long-honed expertise in facing this sort of threat and its enhanced post-Katrina storm defenses, residents were urged to be prepared.

Tanya Gulliver-Garcia, who lives in New Orleans' Broadmoor neighborhood, flew out ahead of Barry, leaving behind neighbors with vivid memories of the 2005 destruction, she said.

"This storm is stressing them out," Gulliver-Garcia told CNN. "Trauma stays in your body, and Katrina left a lot of trauma behind."

But most New Orleanians opted to stay put. Many didn't want to face the expense and effort of leaving, compared to what could be a few uncomfortable hours or days without power or other amenities.

Herman Grady evacuated during Katrina, but this time, he's staying back.