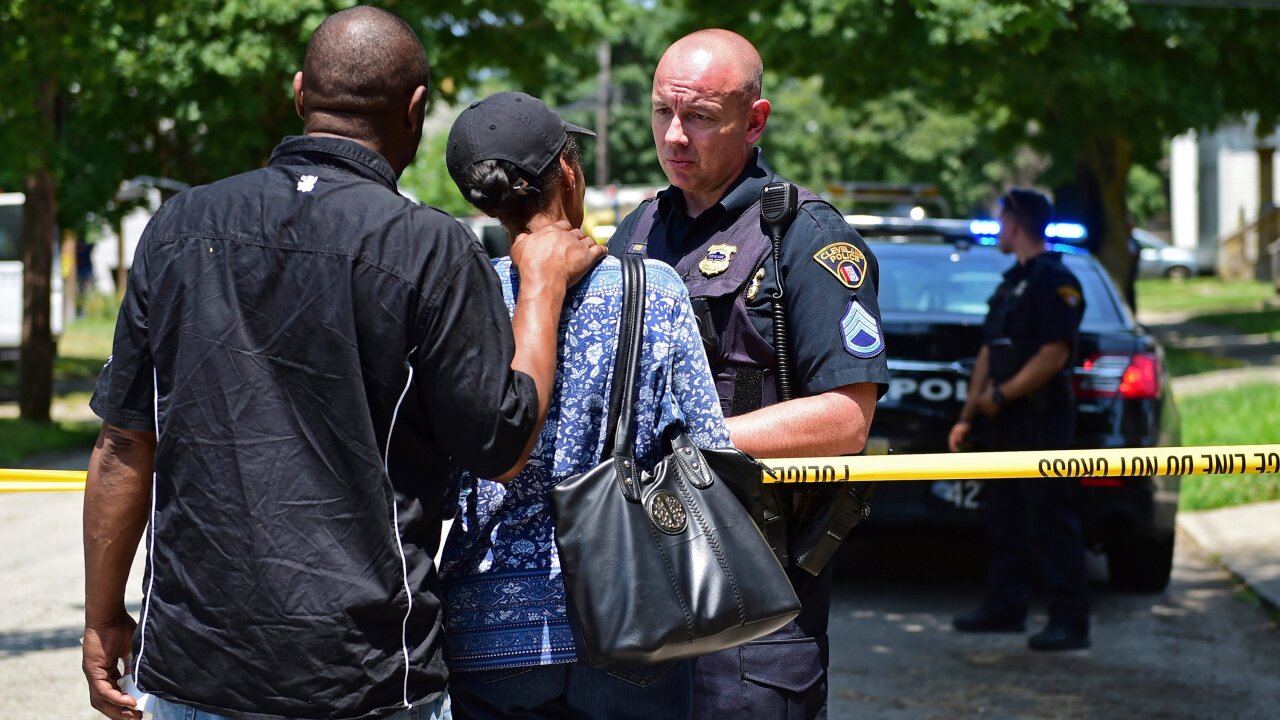 An officer talks with bystanders on Tuesday, July 9, in Cleveland as authorities investigate the shooting death of a man in a vacant lot and the discovery of the bodies of a woman and two children.

CLEVELAND -- Cleveland Police say a man with a history of domestic violence killed a woman, two children -- including one of his own -- and then fatally shot a neighbor who happened to be in the area.

The suspect, Armond Johnson, was arrested and charged with aggravated murder for Tuesday's quadruple homicide, in which two adults were shot multiple times and two children died of smoke inhalation from a fire.

"It is not lost upon us the fact that we are charging the father of one of the children in this crime," said Cleveland Police Lt. Ali Pillow.

On Tuesday, police found Cousin unresponsive in a field between 8 and 9 a.m., Cleveland Police Chief Calvin Williams said. Police working on a tip went to a nearby home and smelled smoke, so they forced their way inside and found Collins and the two children dead, he said.

Some "accelerants" had been used in the fire, William said, without elaborating.

"This is a terrible tragedy," he said.

Cousin was a resident and a neighbor coming home who "happened to stumble upon the suspect when he was leaving the area," Pillow said.

"We're exploring all of the options but right now that's what it looks like: Cousin was a victim of simply being here," Pillow said.

Pillow said the exact relationship between Collins and the suspect is still under investigation.

"There has been a history of domestic violence, but I won't go into the status of the relationship at the time of the crime," Pillow said.

Williams said they wouldn't divulge any details about the domestic violence history because they were going to send it to over to the prosecutor's office.

At the news conference, children from the Boys and Girls Club were present and held a sign with a photo of Armond Johnson Jr., the 6-year-old victim.

One child asked the chief, "how did the man kill them?"

Johnson's first court appearance will be tomorrow at 8:30 a.m. ET, Pillow said. It was not immediately clear if he has an attorney.