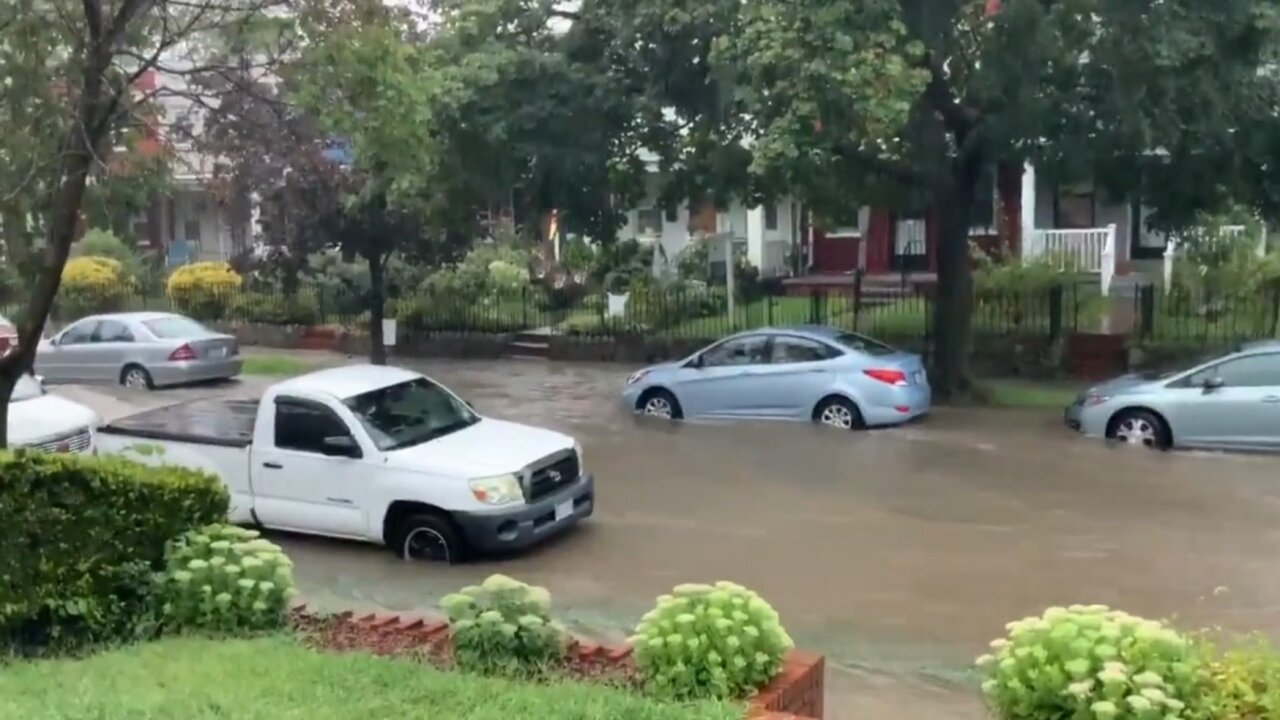 A flash flood emergency has been issued for the Washington D.C. metro area until 11:15 a.m. by the National Weather Service.

WASHINGTON — A flash flood warning has been issued for the Washington, D.C., metro area until 1:45 p.m. Monday by the National Weather Service.

In one hour, some spots just west of the nation’s capital saw over 3 inches of rain, especially along the Potomac River.

Extremely heavy rain continues to fall over much of the area, including the District of Columbia.

Storms are also affecting airports, with traffic heading to Reagan National stopped on the ground. Departure delays by more than one hour have been reported.

Scary exit from the parking garage under the Capitals Ice Rink / Ballston Commons Mall in Arlington. The bottom level is a River! ⁦@WTOP⁩ ⁦@WTOPtraffic⁩ ⁦@ABC7News⁩ pic.twitter.com/exleKNbpEw

Amtrak Spokesman Jason Abrams told CNN that, around 10:20 a.m. Monday morning, six trains, including the Carolinian and Northeast Regional, were stopped “due to flooding/washout conditions” on tracks south of Alexandria, Virginia.

“The affected trains will gradually begin to move as two tracks are being cleared for travel. We did have full power on all six trains during this time and had no reported injuries,” said Abrams. He added that “residual delays” are expected. Amtrak, which will monitor the weather and the tracks, will not run trains “if it is deemed not safe for travel,” he said.

“Excessive runoff from heavy rainfall will cause flooding of small creeks and streams, urban areas, highways, streets and underpasses as well as other drainage areas and low lying spots,” according to the weather service. More than a dozen high water rescues have already been reported in the area.

This is Baker Park in Frederick, Maryland. The park is completely flooded. (Courteousy: Gretchen) #flooding #Frederick

Jeff DuVal, a deputy director of the Department of Transportation & Environmental Services in Alexandria, Virginia, told CNN the flash flooding has already closed a number of roads.

“We are waiting for rain to subside and the water will take some time to drain. Then we can go and inspect and see how many roads were compromised,” he said, noting that along some roadways, the water is three feet high.

“Even though the rain has slowed down, the intersections and roads will remain flooded because the drains simply can’t handle the volume of rain that’s being sent their way,” said DuVal. He explained that even if the rain stops within an hour or two, “there is no way of knowing how long it will take for the flooding to subside.”

Drivers face the greatest danger. “Most flood deaths occur in vehicles,” according to the National Weather Service, which advises against driving into “any area where water covers the road.”

The service requests motorists to “move to higher ground as quickly as possible.”