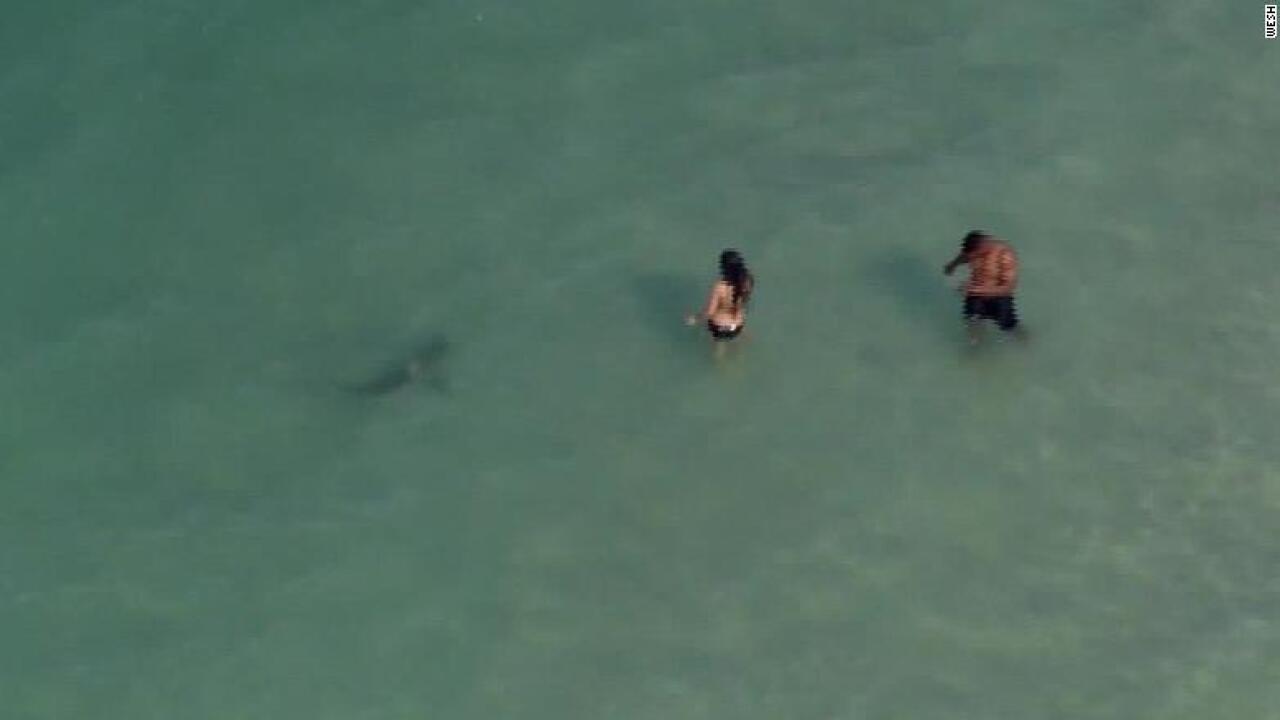 Some beachgoers frolicking in the Florida surf were shocked to find out that sharks were swimming just a few feet away.

Fran Kumpf told CNN affiliate WESH that she saw a shark that appeared to be about 5 feet long on Monday at Daytona Beach.

“The tail was just up and down, so we kind of followed it for a while and then it just disappeared,” she said.

The WESH helicopter flew over the area and saw several sharks, including one that was hanging out in the shallow waters and swam within a few arm lengths of several groups of swimmers.

Gavin Naylor, the program director of the Florida Program for Shark Research, watched the video and told CNN that they were probably blacktip sharks, which are common in the area.

“If people knew how close they were to sharks on a routine basis, they’d have a different perspective,” Naylor said.

He said the sharks generally mind their own business, but they do swim in shallower water hunting for bait fish, such as herring, sardines, menhaden, mullet, and anchovies.

“These particular ones, they would never seek out people, but they might accidentally bite a person if they thought it was a bait fish,” Naylor said.

The International Shark Attack File says that blacktip sharks are responsible for 20% of unprovoked shark attacks in Florida since 1926 — but that is still a very small number. There have only been 29 recorded blacktip attacks worldwide, and only one of those was fatal.

That was little consolation to swimmers, who watched the video.

“They were pretty close, so imagine if your kids go far. You know, watch your kids,” Enrique Herrera told WESH.

An 18-year-old surfer was bitten by a shark on Sunday at nearby New Smyrna Beach. The teen was paddling his surfboard at about 4:30 p.m. when the shark bit his foot, Volusia County Ocean Rescue Capt. Tammy Malphurs told CNN.

He suffered very minor puncture wounds and did not have to go to the hospital, Malphurs said.

Officials don’t know what kind of shark bit him.

Volusia County, which includes Daytona Beach and New Smyrna Beach, leads the US in shark bites. There have been 303 unprovoked shark attacks there since 1882.

Naylor said that waves that make the area so popular with surfers also attract bait fish — and the sharks who want to eat them.

“Unless there were a lot of fish swimming around those people were not likely to be in danger at all because they don’t look like bait fish,” he said.

He said most of the bites happen by mistake because a shark confuses a person’s foot or arm for a fish.