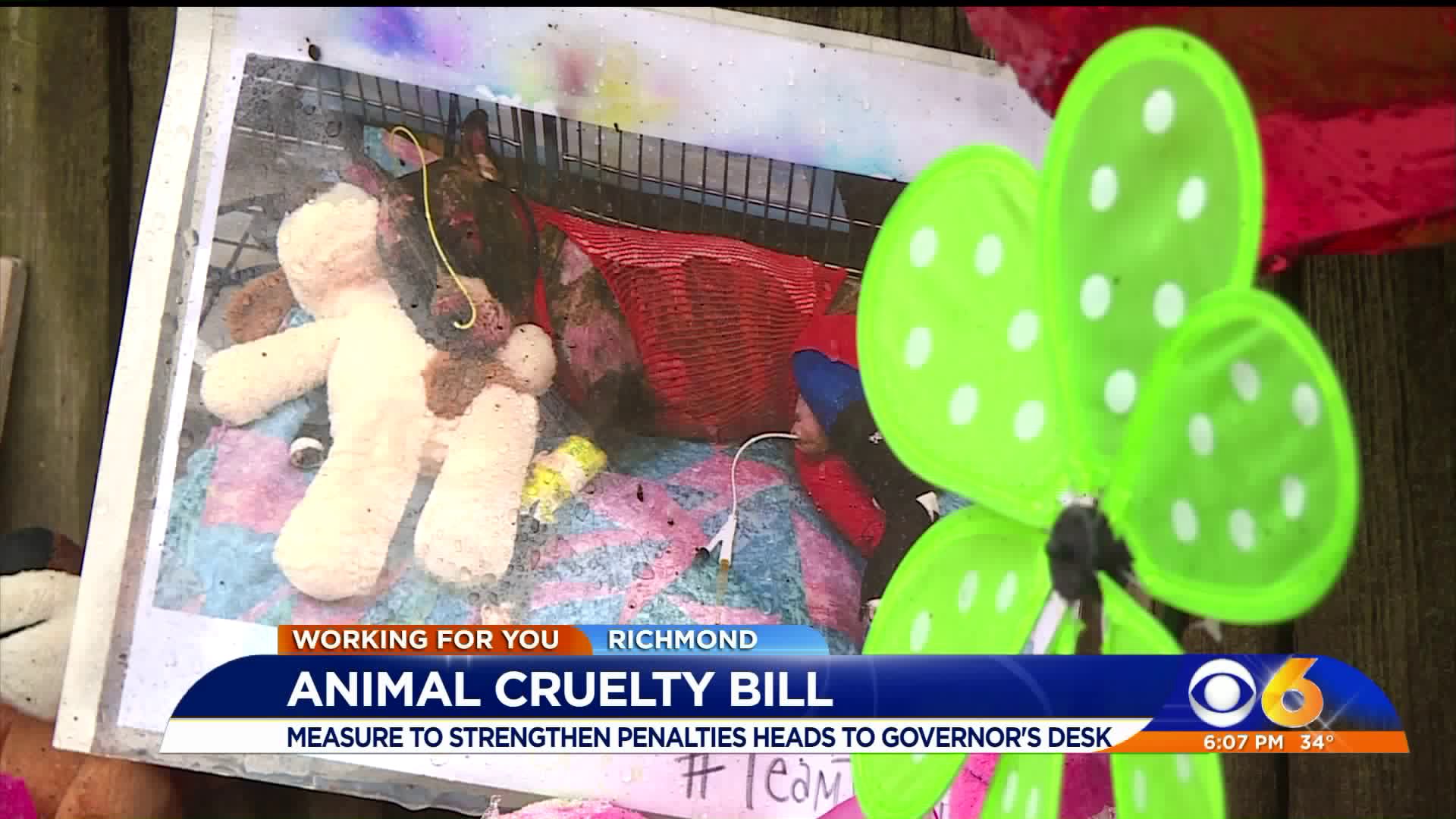 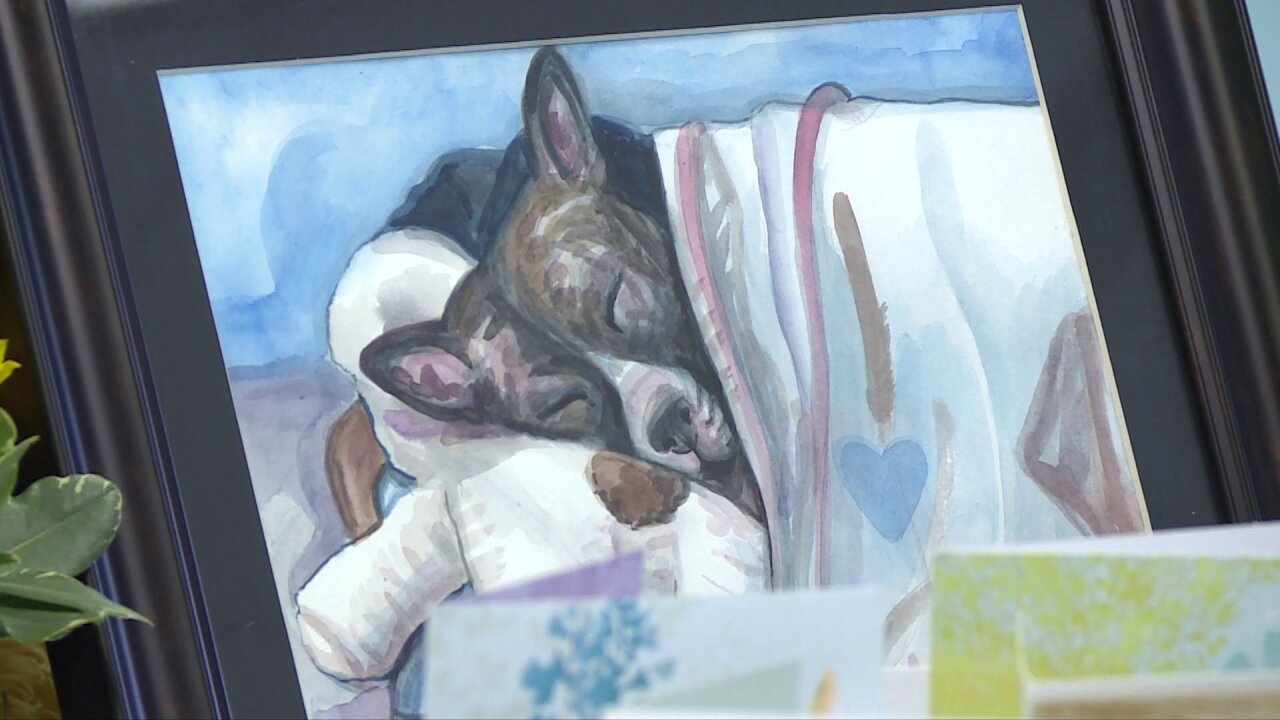 RICHMOND, Va. --  The law passed by Virginia's legislature and signed by Gov. Ralph Northam to stiffen the penalty for animal cruelty goes into effect in the Commonwealth Monday, July 1.

Even though the bill is based off another animal cruelty case, some have dubbed it "Tommie's Law" in honor of the dog who died after being tied to a pole and set on fire in Richmond's Abner Clay Park.

The legislation by Sen. Bill DeSteph (R-Virginia Beach) increases the penalty for "cruelly or unnecessarily beating, maiming, mutilating, or killing a dog or cat" to a felony.

Under previous law, the animal must die as a direct result of the torture or inhumane injury before a suspect faces a felony charge.

Sen. DeSteph said he has been working on the legislation for three years after a dog name Sugar was attacked with a machete in Virginia Beach.

"It should be named for every one of those cases," DeSteph said.  "The crime matches the penalty. Not whether the dog lives or dies, the act of maliciously wounding or torturing a dog is the felony."

Tommie was tied to a fence in Abner Clay Park in Richmond on Sunday, Feb. 10, doused in accelerant, then set on fire.

He lived for another five days before, as Richmond Animal Care and Control (RACC) announced his death in a Facebook post, “his body simply gave out” and he stopped breathing.

Man arrested for killing Tommie says he 'blacked out'

The man charged for killing Tommie  said earlier this month that he "blacked out" and "snapped" after the dog bit his daughter.

Jyahshua A. Hill, 20, was arrested by the U.S. Marshals Regional Fugitive Task Force on May 20 and charged with felony animal cruelty following a months-long investigation into the dog's death.

Hill spoke to CBS 6 by phone from his cell at the Richmond City Justice Center.

Hill said he had owned the male brindle pit bull they named "Choo Choo" for several months. He claimed the dog had attacked several of his family members.

Tommie and Jyahshua A. Hill.

The suspect stated he tried to give the dog away to various shelters, but no one would take it in because the dog was deemed too vicious.

"The dog attacked my daughter and I snapped. I did what I had to do to protect my kids from the dog," Hill described.

Hill said he has been diagnosed with schizophrenia and bipolar disorder, which caused him to become "blacked out." He stated he wasn't under the influence of alcohol or drugs at the time of the crime.

"I grabbed the dog, put a leash on it, saw the lighter fluid, grabbed it -- and me and the dog took off to [Abner] Clay park," Hill explained.

When asked why he did not simply let the dog go, Hill said he did not because it "would've attacked somebody else's kid."

On June 6 a judge denied bond for Hill, who faces felony animal cruelty for a crime he said he regrets.

"I know what I did was wrong, and I'm sorry cause I took it that far, but I did what I had to do to protect my kid," Hill said.

Vet reflects on caring for Tommie

Carrie Alspaugh remembers the February night when a badly burned pitbull, affectionately named Tommie by his rescuers, came into the Cary Street Veterinarian hospital where she worked as a vet tech.

"It was hard, I was there when he passed away," Alspaugh said. "Even in the years I've been doing this it's one of the hardest cases we've ever had."

While he sustained burns over 40 percent of his body, there was hope. Veterinarians, doctors and nurses offered around the clock care and donations poured in from everywhere.

"I mean we'd never had a case that hit so many people.  I think it was such an evil act that we've never seen before so it garnered this collective group of people who've stayed the course with us," Christie Chipps Peters with Richmond Animal Care and Control said.

While all the love and support wasn't enough to save Tommie's life, it led to change.

It also rallied a community to seek justice.

"Justice has prevailed you know,  that's some good that comes of this," supporter Gary Small said.

"When he first got there and we were starting treatments with him, we would play music and get him settled and he would sleep and we'd play little songs for him where he looked peaceful," Alspaugh said. "I think we all thought he was going to make it and maybe we wanted him to have the life he deserved." 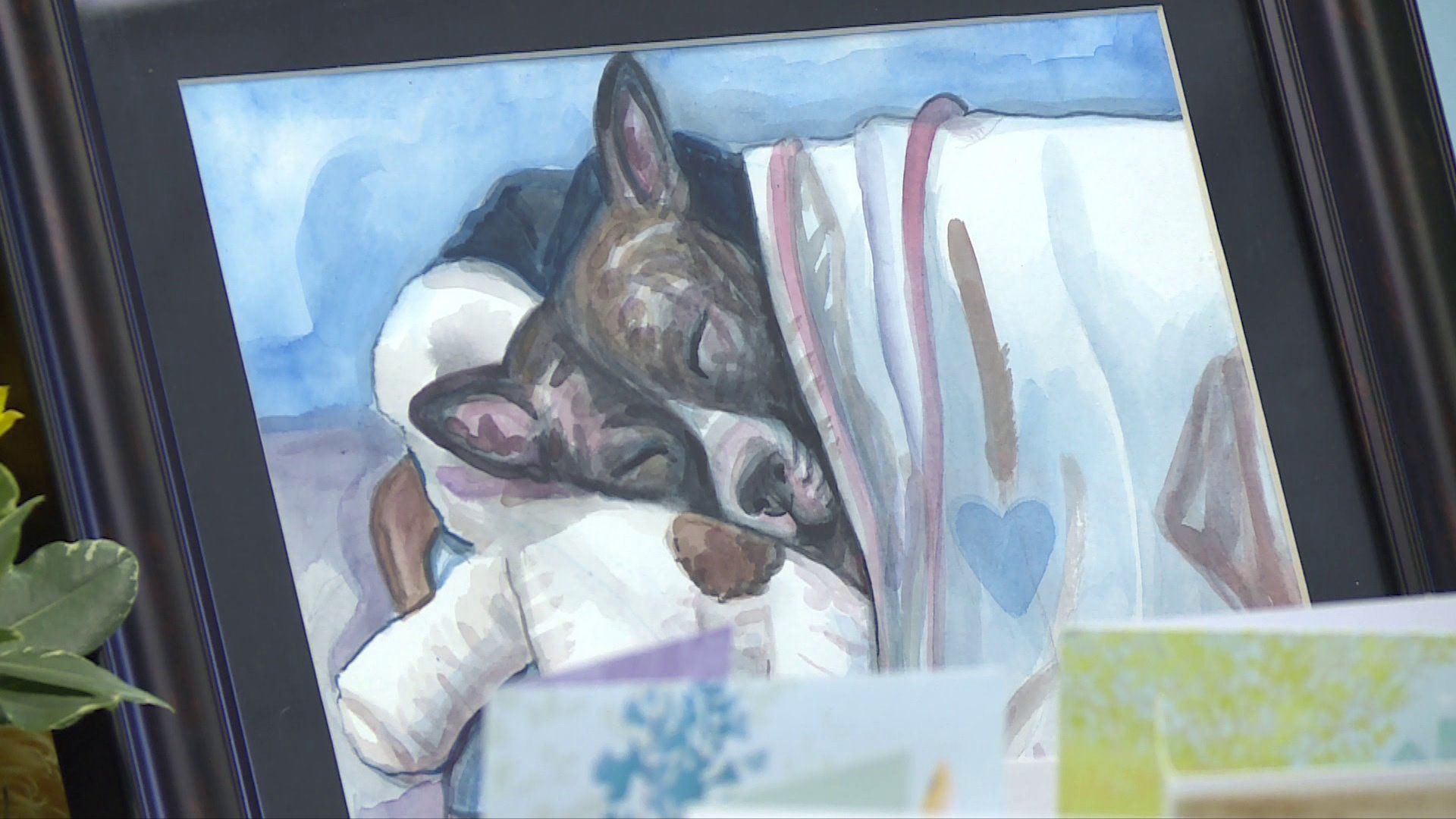