Biden on debate moment: ‘I heard and I listened to and I respect Sen. Harris’ 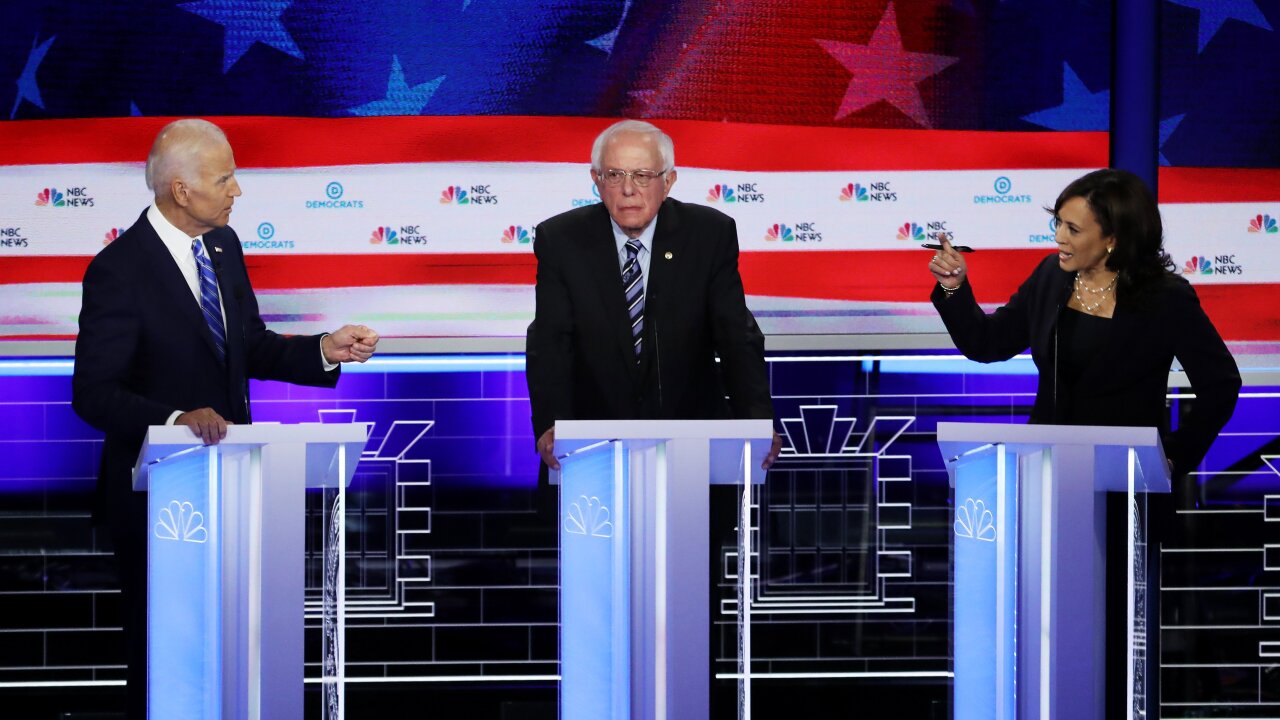 Former Vice President Joe Biden on Friday defended his civil rights record the day after California Sen. Kamala Harris assailed him over race and busing in a Democratic presidential debate.

Former Vice President Joe Biden on Friday defended his civil rights record the day after California Sen. Kamala Harris assailed him over race and busing in a Democratic presidential debate.

“I heard and I listened to and I respect Sen. Harris,” Biden said at a Rainbow PUSH Coalition event on the west side of Chicago. “But, you know, we all know that 30 seconds to 60 seconds in a campaign debate exchange can’t do justice to a lifetime committed to civil rights.”

Biden went on to deliver a lengthy defense of his civil rights record, reading from a Teleprompter as he sought to limit the damage of Thursday night’s debate. He sought to draw a distinction between federally mandated busing, which he opposed, and states or municipalities ordering busing. He also insisted he “did support federal action to address the root causes of segregation,” pointing to his opposition to racial discrimination in mortgage lending and votes he cast that drew the ire of his white constituents.

“I never, never, never have opposed voluntary busing,” Biden said. He said that’s the program Harris — who used her experience growing up in Berkeley to assail Biden’s early-career opposition to federally mandated busing to integrate schools — grew up with.

He also backed away from his debate-stage argument in favor of states’ rights, saying that “I fought my heart out to make sure that civil rights, voting rights, equal rights are enforced everywhere” and that it’s the “federal government’s duty” to ensure their enforcement.

“That’s why I ran for federal office in the first place,” he said.

Biden’s speech in Chicago was an attempt to steady his campaign after an exchange with Harris that ran the risk of damaging his support — particularly among black voters, who have been his strongest constituency in early polls.

“We need to reform criminal justice, to make sure black mothers feel confident when they send their child, their son, out on the street — he’s going to be safe,” he said in Chicago. “We have to recognize that kid wearing the hoodie may very well be the next poet laureate and not a gang-banger.”

Biden praised former President Barack Obama, for whom he was vice president, saying Obama “had a backbone like a ramrod.”

“The discussion in this race shouldn’t be about the past,” he said.

The clash between Harris and Biden was an ugly end for the former vice president in a controversy that had started more than a week earlier, when at a fundraiser he praised the “civility” of an earlier political era in which he struck deals with segregationist senators.

Harris said she did not believe Biden is racist. “But,” she added, “I also believe — and it’s personal — it was hurtful to hear you talk about the reputations of two United States senators who built their reputations and career on the segregation of race in this country.”

She then turned to Biden’s 1970s advocacy for banning federally mandated busing to integrate schools.

“There was a little girl in California who was part of the second class to integrate her public schools and she was bused to school every day,” Harris said. “That little girl was me. So, I will tell you that on this subject, it cannot be an intellectual debate among Democrats. We have to take it seriously. We have to act swiftly.”

Biden responded: “You would have been able to go to school the same way because it was a local decision made by your city council.”

Harris jumped in: “But do you agree today that you were wrong to oppose busing in America then? Do you agree?”

“I did not oppose busing in America, what I opposed is busing ordered by the Department of Education,” Biden said, making an argument for states’ rights. “That’s what I opposed.”

After a brief defense of his own record, Biden, nodding to moderators’ clock, said, “My time is up, I’m sorry.”

In Chicago on Friday, Biden rolled out a series of proposed reforms. He said he supports ending mandatory minimum sentencing, ending private prisons, funding bail reform so that no one is “in jail because they don’t have the money to pay their bail,” prohibiting juveniles from being placed in adult prisons, requiring treatment rather than prison sentences for drug addiction, eliminating the disparity in criminal penalties between crack and powder cocaine, and decriminalizing marijuana.

He also pushed back against progressives’ criticism of Biden representing a return to the pre-Donald Trump era in which systemic racism went unchecked.

“I know I get criticized for saying we can unite the country,” Biden said. “But ladies and gentlemen, I refuse to accept the status quo. The status quo of this miserable, ugly politics we have today guarantees we’ll continue to do the same.”