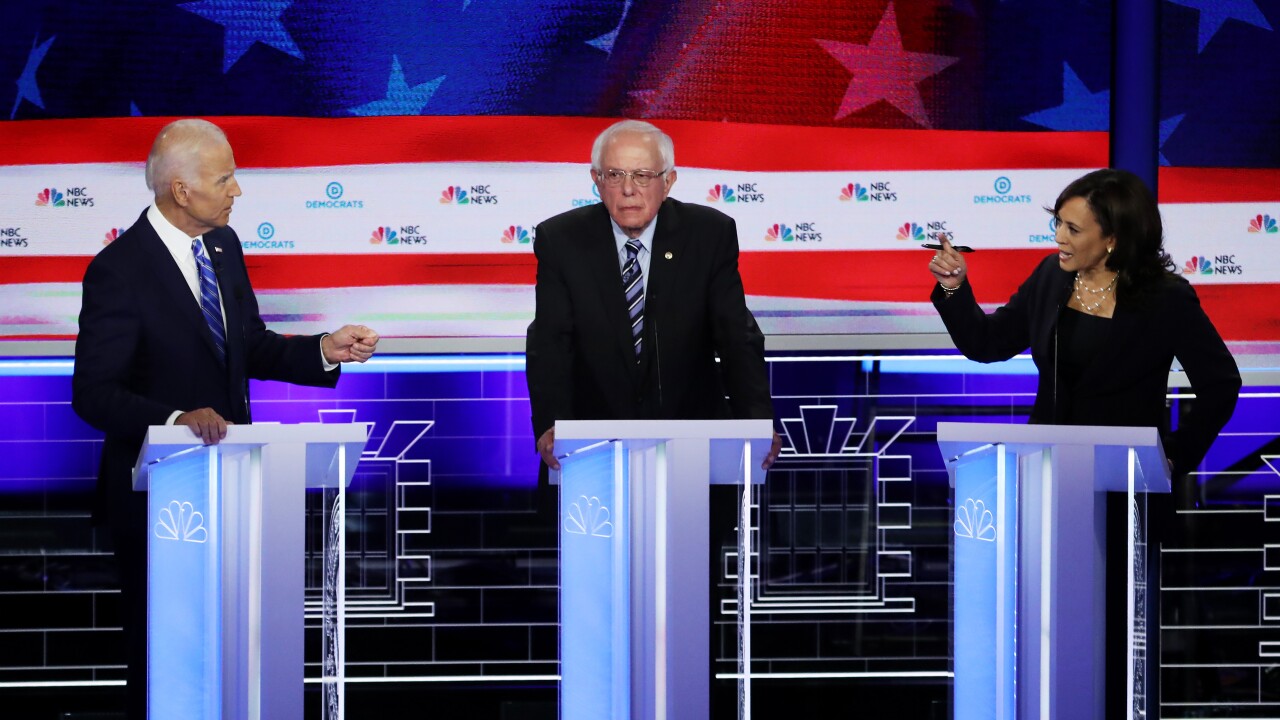 Harris opened the debate’s second hour with the most stunning moment of the night, launching a scathing attack on former Vice President Joe Biden over race and school busing.

It came after she had spent the first hour personalizing Democrats’ push leftward toward single-payer “Medicare for All” health insurance and on immigration enforcement in terms that showed the human stakes of issues that are likely to be at the center of the general election against President Donald Trump.

And she drew huge cheers when she dismissed a bickering Biden, Vermont Sen. Bernie Sanders and California Rep. Eric Swalwell, accusing them of taking part in a “food fight.”

Here are six takeaways from the second night of Democrats’ first presidential debates in Miami:

Harris to Biden: ‘That little girl was me’

In the night’s most dramatic moment, Harris, a former California attorney general and a freshman senator, seized control of the debate as she invoked Biden’s comments at a recent fundraiser in which he discussed the “civility” of an era in which he had worked with segregationist senators.

“Vice President Biden, I do not believe you are a racist and I agree with you when you commit yourself to the importance of finding common ground, but I also believe, and it’s personal and it was hurtful, to hear you talk about the reputations of two United States senators who built their reputations and career on the segregation of race in this country,” Harris said.

She then pivoted to a more personal attack, pointing to Biden’s early-career efforts to prevent the Department of Education from integrating school busing. She said that decision had hurt a little girl in California.

“That little girl was me,” Harris said. “So I will tell you that on this subject, it cannot be an intellectual debate among Democrats. We have to take it seriously. We have to act swiftly.”

The moment put Biden on his heels as he raised his voice and defended his record.

“It’s a mischaracterization of my position across the board,” Biden said. “I do not praise racists. That is not true. Number one. Number two, if we want to have this litigated on who supports civil rights, I’m happy to do that.”

He also channeled a familiar and pointed progressive criticism of Harris, noting that before he was elected to the Senate at age 29, “I was a public defender. I didn’t become a prosecutor.”

Biden was ultimately saved by the bell. His final comment of the exchange, noting the clock, was: “My time is up.”

The moment came partially due to the luck of the draw as the 20 candidates who qualified for the debate were divided into two nights. Two African American candidates in the race had sharply criticized Biden in recent days. The other, New Jersey Sen. Cory Booker, was onstage Wednesday night, so he didn’t get an opportunity to take on Biden face-to-face.

Debate viewers typically groan when candidates drop in lines that seem practiced. But Harris got major applause when she landed one during the first fracas of the debate, as Biden and Sanders bickered with Swalwell over age.

“Americans don’t want to witness a food fight. They want to know how we’re going to put food on their table,” she said.

The freshman California senator was on course for a breakout performance.

She deflected a question designed to pit her against other Democrats’ big-spending programs when she was asked if the party’s candidates have a responsibility to explain how they will pay for their proposals.

“Where was that question when the Republicans and Donald Trump passed a tax bill that benefits the top 1% and the biggest corporations?” she asked.

Harris also accomplished something other Democrats have struggled to do: personalize her fight against insurance companies as she calls for single-payer health insurance.

She urged viewers to consider a family that takes a child into an emergency room knowing that — even with insurance — they will be staring down a $5,000 deductible the moment they walk through the doors.

“That’s what insurance companies are doing in America today,” she said sternly.

Biden: ‘I’m still holding on to that torch’

Swalwell was the first candidate in either night of the Democrats’ first debates to go after the party’s front-runner, Biden.

He urged Biden, over and over, to “pass the torch” to a new generation of Democrats.

“I was 6 years old when a presidential candidate came to the California Democratic convention and said it’s time to pass the torch to a new generation of Americans,” Swalwell said. “That candidate was then-Sen. Joe Biden.”

The line came as Swalwell, who is 38, and Biden were split-screen on camera. The audience let out a collective gasp.

The 76-year-old Biden shot back: “I’m still holding on to that torch. I want to make it clear.”

Sanders interjected, saying the question isn’t about the ages of the candidates but the generational appeal of their ideas. That’s when Harris shot the group down with her condemnation of the “food fight.”

Biden would return to the theme later in the debate, highlighting his five decades of experience in politics.

Buttigieg: ‘I couldn’t get it done’

South Bend, Indiana, Mayor Pete Buttigieg took personal ownership of a tragedy in his city, where a white police officer shot and killed an African American man, saying that the police force there lacked diversity because “I couldn’t get it done.”

Buttigieg’s rise into the top tier of Democratic candidates has been among the most surprising developments of the 2020 race so far. The turmoil in his hometown is the most significant threat to his candidacy he has yet faced, and the stakes were high as Democrats watched to see how he would address it.

Buttigieg said the situation around the shooting is a “mess” because the officer didn’t have his body camera turned on.

“We are hurting. I could walk you through all of the things we have done as a community,” Buttigieg said. “All of the steps we took, from bias training to de-escalation, but it didn’t save the life of Eric Logan. When I look into his mother’s eyes, I have to face the fact that nothing that I say will bring him back.”

He added: “This is an issue that is facing our community and so many communities around the country. Until we move policing out from the shadow of systemic racism and whatever this reaches us, there is a wall of mistrust put up one racist act at a time, not from what happened in the past, but what happened in the present. It threatens the well-being of every community. I am determined to bring about a day when a white person driving a vehicle in and a black person driving a vehicle, when they see a police officer approaching, feels the same thing. Not of fear, but of safety. I am going to bring about that very thing.”

Biden and Sanders were the top-polling candidates onstage Thursday night.

But the two spent long periods feeling secondary, as Harris dominated the discussion, Buttigieg landed key moments on police shootings and religion, and lower-polling contenders like Swalwell played the role of aggressor.

Sanders’ best moments came in the debate’s first 15 minutes, when it was clear that his policy agenda — Medicare for All, free college tuition and student debt forgiveness — was at the center of the questions every candidate was asked.

But Colorado Sen. Michael Bennet, rather than Biden, was the most critical of Sanders’ agenda. And it was Harris who put its stakes in personal terms.

Biden, meanwhile, spent much of the night reaching backward to his time as former President Barack Obama’s vice president, pointing to Obama accomplishments like the Paris climate accord. He rarely broke from his talking points and didn’t steer the debate’s direction at any stage.

The good news for Biden: Polls have shown his supporters are older and more moderate, and aren’t as much a part of the conversation on social media, where Harris was dominating the night.

Buttigieg’s best moment recalled the beginning of his rise, when in a CNN town hall he’d assailed Vice President Mike Pence over faith.

“We should call out hypocrisy when we see it. And for a party that associates itself with Christianity, to say that it is OK to suggest that God would smile on the division of families at the hands of federal agents, that God would condone putting children in cages, has lost all claim to ever use religious language again,” Buttigieg said.

His appeal is partly about his willingness to take on his home-state foe over issues at the center of Pence’s political identity. Buttigieg has argued that Democrats should not cede values like faith and freedom to the GOP, and he seized an opportunity to make his case Thursday night.