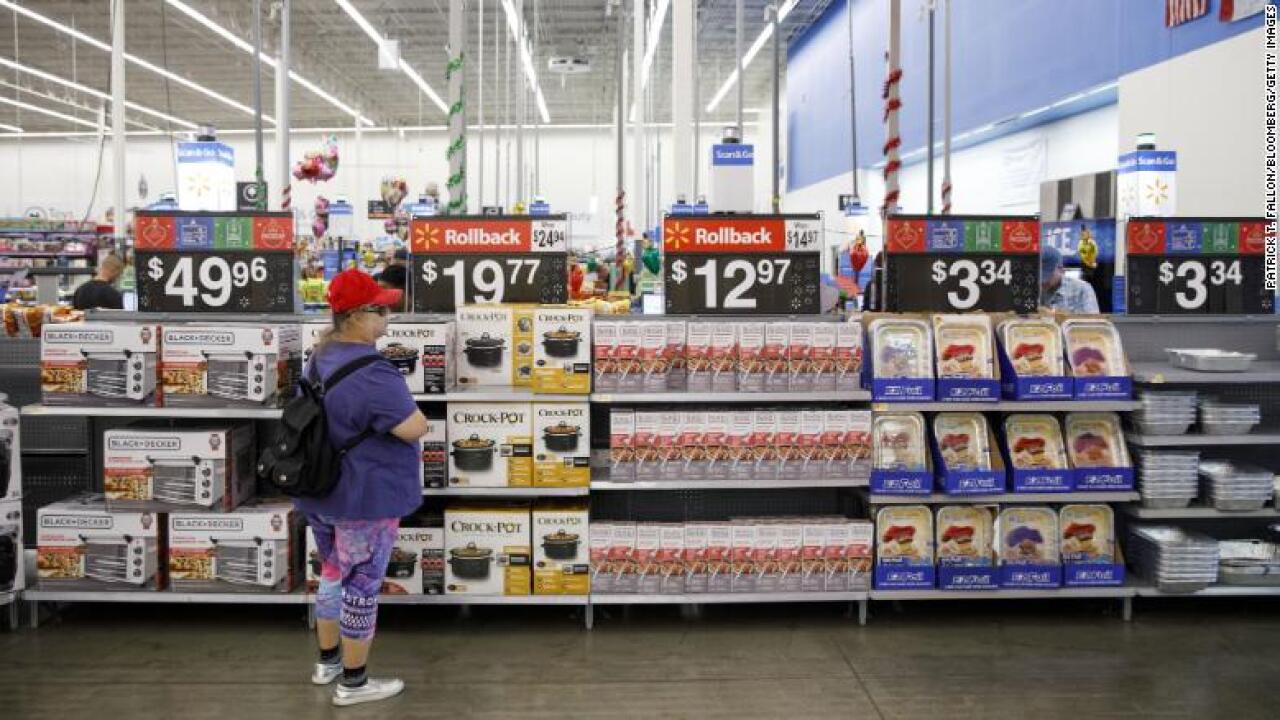 A customer browses products at a Walmart Inc. store in Burbank, California, U.S., on Monday, Nov. 19, 2018. To get the jump on Black Friday selling, retailers are launching Black Friday-like promotions in the weeks prior to the event since competition and price transparency are forcing retailers to grab as much share of the consumers’ wallet as they can. Photographer: Patrick T. Fallon/Bloomberg via Getty Images

Walmart has monopolized the grocery business across the United States and should be forced to sell off some of its stores, an advocacy group charged in a scathing report released Thursday.

Walmart is the nation’s largest grocer. It controls around a fifth of the grocery industry nationwide. The company’s strength in some corners of America is overwhelming and has stifled competition, according to an analysis by the Institute for Local Self-Reliance, a nonprofit group that criticizes Walmart, Amazon and other large companies.

The Institute for Local Self-Reliance “challenges concentrated economic and political power” and advocates for widely-dispersed responsibilities in local communities. It is funded mostly by foundation grants, such as Ford and Wallace Global, said Stacy Mitchell, co-executive director of the group.

In 43 US metropolitan areas and 160 smaller American markets, Walmart controls 50% or more of grocery sales, according to the report. In 38 of these regions, Walmart’s share of the grocery market is 70% or higher, the group says.

“No other corporation in history has ever amassed this degree of control over the US food system,” said Mitchell, the author of the report.

Walmart said it wouldn’t address the group’s specific claims, but a spokesman offered this statement on the report: “This flawed report ignores the fact that millions of Americans are able to enjoy access to quality fresh food at affordable prices because of Walmart,” said Randy Hargrove.

The company views its strength in groceries as a key advantage, giving it a leg up on competitors, including Amazon.

“We continue to grow share in grocery, and a lot of that is coming from things that we can do that competitors are going to struggle to do,” Walmart CFO and executive vice president Brett Biggs said at an analyst conference last month.

Today, Walmart has more than 4,700 US stores and groceries are its biggest business. Walmart sold $184 million worth of groceries in the United States last year, more than half of the company’s US revenue. Walmart has opened more than 300 stores in so-called “food deserts” — urban and rural areas where other stores have not gone as part of an initiative the retailer rolled out in 2011.

But growing pressure from rivals such as Amazon, Aldi, Kroger and Dollar General has forced Walmart to keep prices low and innovate. Amazon bought Whole Foods in 2017 for about $14 billion and reportedly plans to open a new, separate line of grocery stores. Kroger has built up its private-label business and invested in online operations, while Dollar General is adding produce sections to hundreds of stores.

And discount German grocery chain Aldi is growing rapidly in the United States. Aldi plans to expand to 2,500 stores in America by the end of 2022, up from around 1,900 today, and it’s trying to undercut Walmart’s low prices.

“I never underestimate them,” Walmart US chief Greg Foran said of Aldi at a retail industry conference in March. “They are fierce and they are good.”

In response to stiff competition, Walmart has added more than 2,000 grocery pickup locations from stores; same-day home delivery options; and it’s trying to prepare for the future of grocery shopping with delivery into customers’ refrigerators while they’re away from home.

Still, Walmart’s grocery dominance in some areas allows it to “manipulate food producers,” including farmers and processors, Mitchell argued. The retailer can raise prices, cut services or take products off the shelves without risk of losing customers.

The group called on the Federal Trade Commission to review the 203 markets where Walmart controls 50% or more of grocery sales, and, “in as many as is feasible, compel the retailer to divest stores.”

Walmart, which was founded in Arkansas by Sam Walton and his brother in 1962, did not start selling groceries until it opened its first jumbo-sized superstore in 1988 in Missouri. The superstore combined general merchandise with a full-scale supermarket.