What you need to know about the first Democratic presidential debate 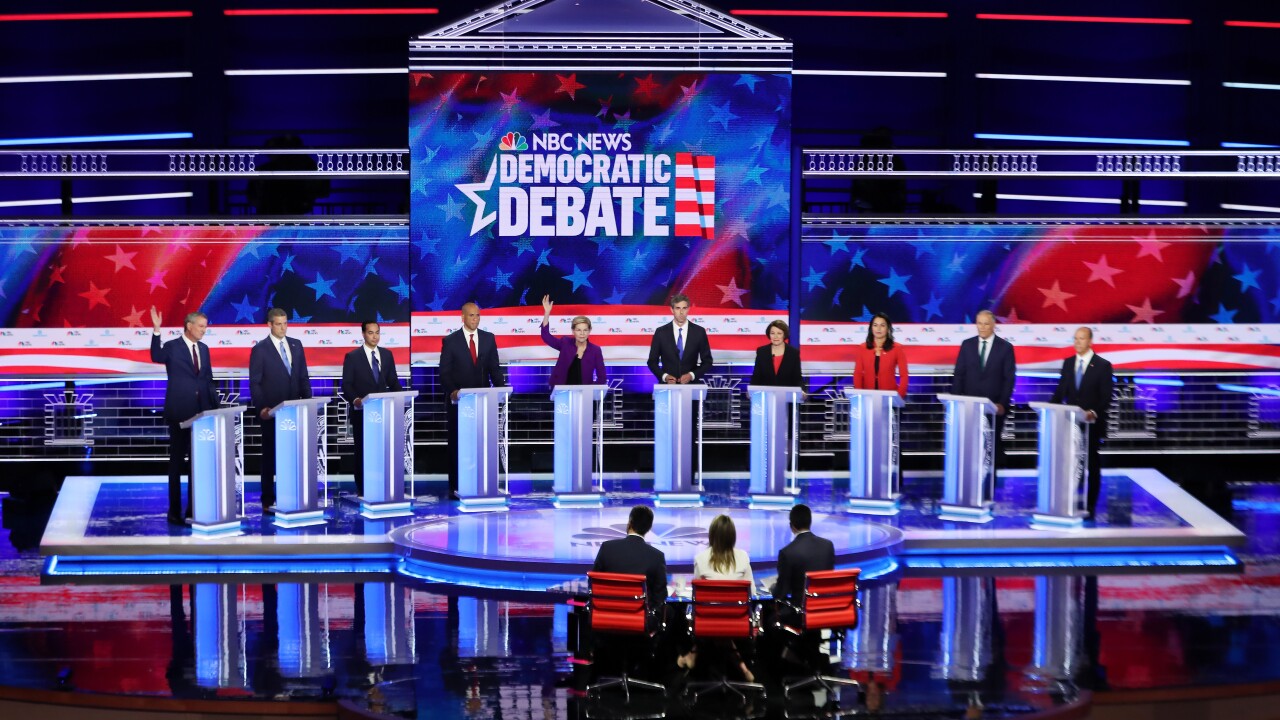 MIAMI — Sen. Elizabeth Warren of Massachusetts was the top-polling Democratic presidential candidate onstage Wednesday night, and the early moments of the party’s first 2020 debate showed why.

Warren was asked four other questions before most of the nine other contenders had been asked two. Her platform set the pace for the night, with other candidates embracing elements of it — or at least passing on opportunities to break directly with her.

Sen. Cory Booker of New Jersey was a steady presence onstage Wednesday night, offering an aspirational message and separating himself from other candidates on gun control.

Warren dominated the debate’s first half hour, moving herself closer to Sen. Bernie Sanders of Vermont on single-payer health care — a move that could ease the concerns of progressives in the process. She faded the rest of the way, but went unscathed.

Another candidate who took no fire: former Vice President Joe Biden, the party’s front-runner, who will debate with nine other Democrats on Thursday night.

Here are eight takeaways from the opening night of Democrats’ first 2020 presidential debates:

Warren goes all in on ‘Medicare for all’

One question going into the debate was how hard Warren — who has cut deeply into Sanders’ hold on Democrats’ progressive wing — was willing to fight for single-payer health insurance when she had signaled an openness to more moderate plans in the past.

“I’m with Bernie on ‘Medicare for all,’ ” Warren said.

Her answer further narrowed the political distance between Warren and Sanders, who will be on the debate stage Thursday night.

In her response, Warren channeled Sanders’ attacks on the insurance industry, casting it as a fundamentally corrupt enterprise, then targeting candidates who, for whatever reason, opposed or cast doubt on the plan.

A night for Spanish speakers and women

O’Rourke got the third question of the night, about the economy — and answered it in Spanish before delivering the English version.

It was an effort to show the former El Paso congressman’s ability to reach Spanish-speaking voters as immigration takes center stage in the Democratic race — as well as to reach the audience watching live on Telemundo.

Booker’s stare-down of O’Rourke during the answer got buzz on Twitter — and 30 minutes later, it became clear why: Booker went with the same move, beginning his answer on immigration by speaking Spanish.

Castro got in a line in Spanish, too, at the beginning of his closing remarks.

It was by far the most Spanish that had ever been spoken on a presidential debate stage.

And it came on the heels of history being made at the debate’s outset: Three female candidates (Warren, Sen. Amy Klobuchar of Minnesota and Rep. Tulsi Gabbard of Hawaii) were onstage, more than ever before.

Battle of the Texans

Castro took aim at his fellow Texan, O’Rourke, over immigration in what was by far the most direct and personal clash of the night.

Castro has called for decriminalizing crossing the border by repealing Section 1325 of the Immigration and Nationality Act — a position O’Rourke opposes, saying he wants a “comprehensive rewrite” of immigration laws and backs plans to “ensure you don’t criminalize those who are seeking asylum.”

Castro jumped on these comments, telling O’Rourke that “if you did your homework on this issue” he would understand that what he is talking about is different from what Castro is proposing.

Castro brought up comments O’Rourke had made on CNN earlier this month, when he told CNN’s Jake Tapper that he did not think the law should be repealed.

“Let’s be very clear: The reason that they are separating these little children from their families is that they are using Section 1325 of that act, which criminalized crossing over the border, to incarcerate the parents and then separate them,” Castro said. “Some of us on this stage have called to end that section, to terminate it; some, like Congressman O’Rourke, have not.”

Castro added: “And I want to challenge all of the candidates to do that. I just think it is a mistake, and I think if you truly want to change the system then we have to repeal that section.”

‘There are three women on this stage’

Klobuchar brushed Washington state Gov. Jay Inslee back on abortion rights, responding to his claim that he was the only person onstage to sign into law measures that protect women’s choice by saying that “there are three women on this stage” who have fought for abortion rights.

It was a simple but effective reminder that there are more women on this debate stage and the one Thursday night than you’ve ever seen on a presidential debate stage.

Klobuchar also brought a straightforward approach to the stage Wednesday night. She was the first to attack President Donald Trump, and invoked him in nearly every answer.

Warren sets the pace while O’Rourke wears the target

Warren was the highest-polling candidate onstage Wednesday night. But several lower-tier contenders had clearly decided their best chance at a breakout moment would come by ignoring her and instead attacking O’Rourke — the candidate positioned to her left.

“Private insurance is not working for tens of millions of Americans,” de Blasio said.

Then Castro launched his sustained attack on the issue of immigration.

Booker separates himself on guns
Booker took an opportunity Wednesday night to draw a contrast with other candidates on gun control.

Booker unveiled his gun plan in May. It would create a gun license, making it a federal standard, similar to a driver’s license or a passport. The license would require fingerprints, an interview and completion of a gun safety course.

“My plan to address gun violence is simple,” the New Jersey Democrat said in a statement at the time. “We will make it harder for people who should not have a gun to get one.”

Biden gets a pass

Biden isn’t onstage until Thursday night — but it had seemed likely that other Democrats would have something to say about him.

After all, O’Rourke had criticized Biden’s reversal on the Hyde Amendment. Booker had called on him to apologize for his comments about “civility” with segregationist senators. Warren had cast him as backward-looking and out of touch with systemic problems.

But Biden didn’t come up at all on Wednesday night. Trump was a punching bag, as expected; O’Rourke took a lot of shots; and lower-tier candidates like Rep. John Delaney of Maryland looked to inject themselves at every possible opportunity. But for the most part, the candidates didn’t take aim at members of the vast Democratic presidential field who weren’t there — including the party’s front-runner.

The exception to that rule was de Blasio.

He was willing to interject at every turn. He pummeled O’Rourke all night. And he also made reference to South Bend, Indiana, Mayor Pete Buttigieg, who isn’t onstage until Thursday night.

De Blasio said he’s had serious conversations with his black son, Dante, about how to protect himself.

He went on to describe some of the discussions he’s had with his son, including “how to deal with the fact that he has to take special caution because there have been too many tragedies between our young men and our police, too, as we saw recently in Indiana.”

It was a reference to criticism of Buttigieg after a white police officer shot and killed a black man in South Bend.

“Look, obviously they are going through a tragedy there in South Bend and a lot of cities, including our city, have been through tough, tough moments like that. I certainly, my heart goes out to everyone in South Bend. It is a tough, tough thing to go through,” de Blasio said.