Teen survives 10-inch knife lodged in face: ‘It could have been the end of me’ 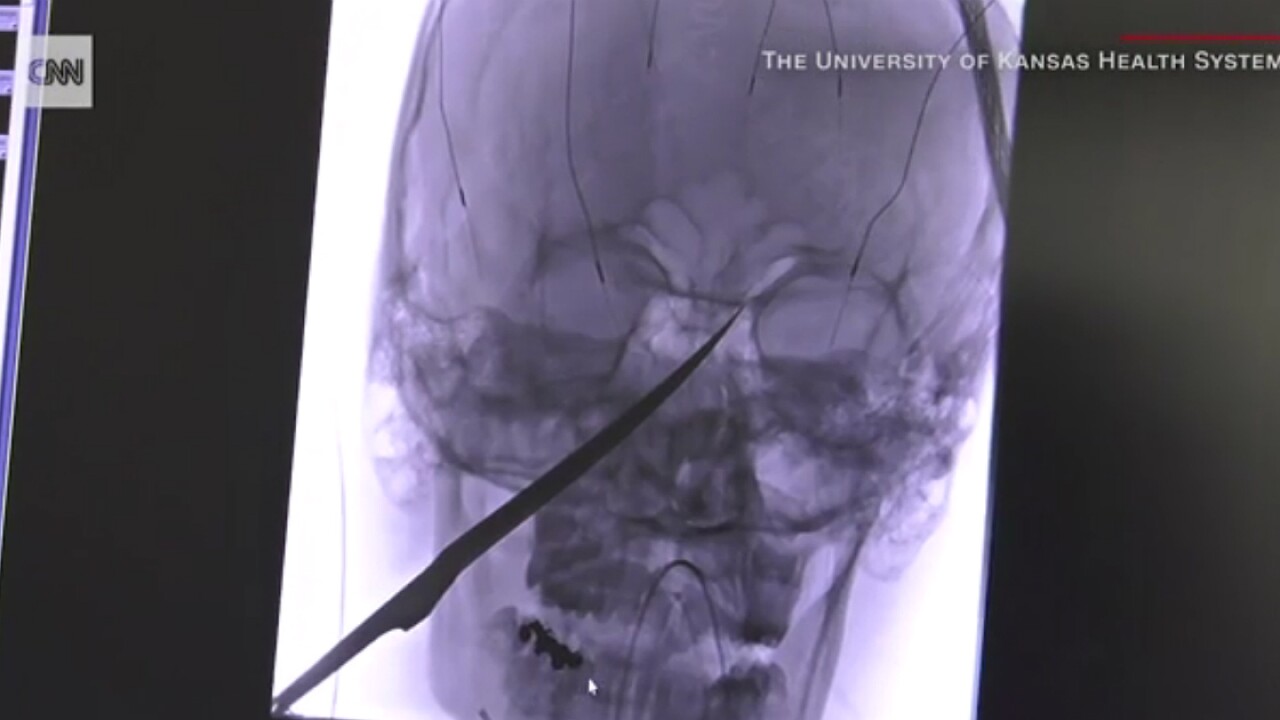 BOURBON COUNTY, Kansas – When Dr. Koji Ebersole laid eyes on the boy whose face was impaled on a 10-inch knife, the neurosurgeon thought, “here we go again.”

Eli Gregg, 15, of Bourbon County, Kansas, is recovering from the freak accident after going home from the hospital on Monday. In a rare occurrence, he’s the second boy Ebersole has treated recently for a sharp object piercing the head.

The first was 10-year-old Xavier Cunningham. In 2018, he survived a penetrating injury to the head after falling from a treehouse ladder in Missouri and landing on a footlong metal meat skewer. He said he was being attacked by yellowjackets, a type of wasp, before he fell.

“When it happened to Xavier, as soon as we saw the X-ray, my colleague said, ‘this is going to go viral,’ ” said Ebersole, a neurosurgeon at the University of Kansas Health System.

A medical team at the University of Kansas Health System then operated on Xavier and removed the skewer.

“I think going through Xavier’s case helped us a lot for this one,” Ebersole, who’s also an associate professor at the University of Kansas in Kansas City, said of treating Eli.

“At the time of Xavier’s case, nothing like that had been seen at our hospital amongst the personnel that were involved,” he said. “This is supposed to be once in a career.”

In the Kansas countryside, Eli was playing outdoors with his brothers and some close family friends on Thursday evening when they came across the knife, Ebersole said.

“It didn’t belong to the family. They found it, it sounds like, outside in the grass, about 10 inches long,” he said. “My understanding is, Eli wanted to take it away from the younger kids for protection, and in that transition, there was a trip and a fall, and it was in the hand of another boy at the time, and … it fell into his face.”

In a video interview released by the hospital, Eli said that the incident happened “very quickly” and that when he found his mother in their kitchen, she immediately called 911.

“When she looked at me, she just gasped,” Eli said.

With the knife embedded in his skull, Eli was sent to the University of Kansas Health System early Friday. Ebersole said he and his colleagues started to operate on Eli about 7 a.m.

While closely monitoring blood vessels near where the knife was lodged, Ebersole and his colleagues used catheters, tiny balloons and other tools to carefully remove it.

“Once it started moving, it was out in 10 seconds,” Ebersole said.

He added that Eli “didn’t suffer any brain injury. No injury to vision. No injury to the movement of the eyes. No strokes. No brain bleeding. Really, he’s just got a small little cosmetic incision line, if you will, from the knife on his right cheek. You would never know that he went through all of this.”

Of course, Eli was alarmed about the incident, but “I saw a small smile today when he realized that his story was bringing hope to other people,” Ebersole said Monday.

While at home, Eli was instructed to “take it easy for a couple of days, and then we’ll take another MRI in about a week,” Ebersole said.

“I’m really happy that they were able to get it out and keep me alive,” Eli said of the surgery to remove the knife.

“I finally get to see the rest of my family,” he said through tears. “I get to go home.”