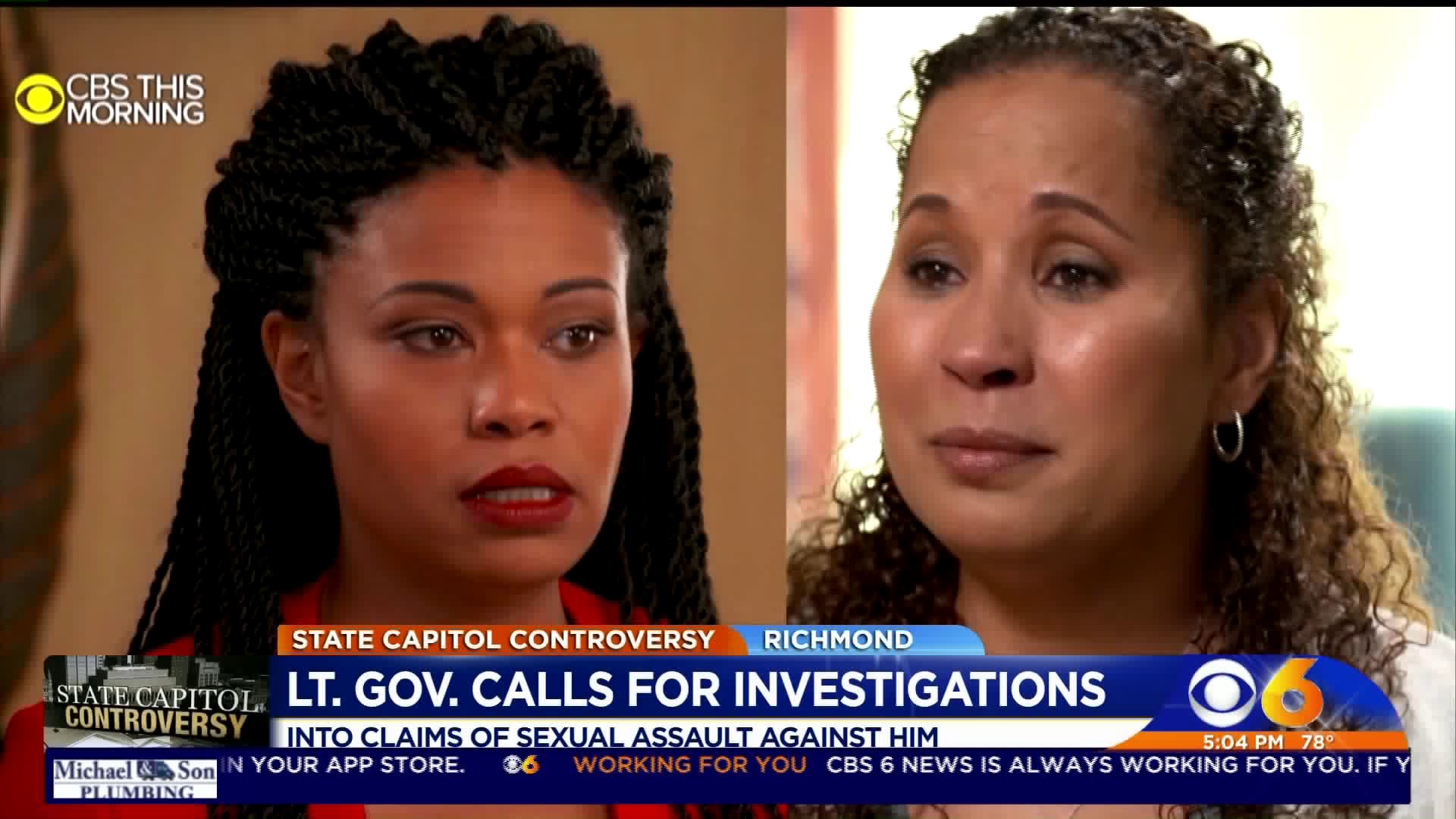 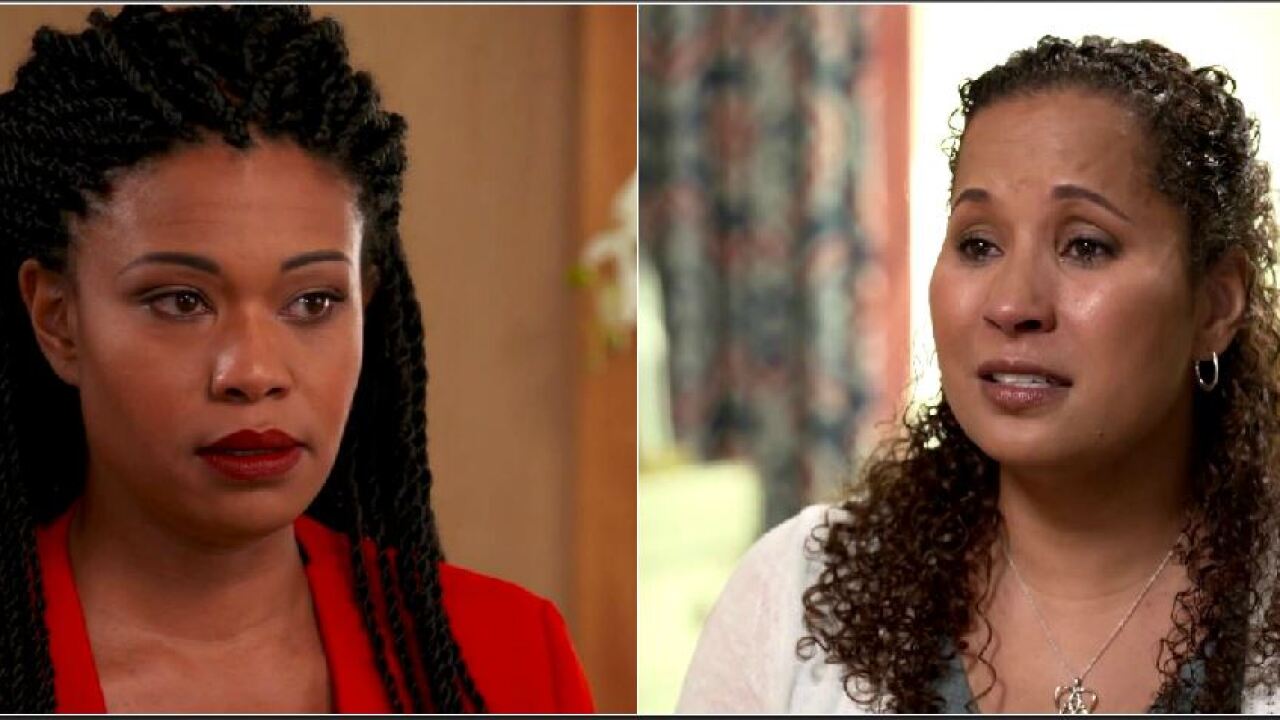 RICHMOND, Va. -- The attorney for Virginia Lt. Gov. Justin Fairfax has sent letters to prosecutors in North Carolina and Massachusetts requesting their offices open criminal investigations into claims of sexual assault against him.

Fairfax, a Democrat, is accused by two different women of sexual assault, accusations that emerged during the blackface scandal surrounding Democratic Gov. Ralph Northam when there were calls for Northam to step down. Fairfax is first in line of succession should Northam resign.

Vanessa Tyson accused Fairfax of forcing her to engage in sexual acts without her consent during the 2004 Democratic National Convention in Boston. Meredith Watson, a classmate of Fairfax at Duke University, claims the lieutenant governor raped her during their time as students at Duke in 2000.

Fairfax has vehemently denied both claims, but did not endorse a criminal investigation by the specific jurisdictions into the matter until early April. He called for those investigations after he claimed that he had voluntarily taken and passed a polygraph examination. The move by Fairfax attorney Barry Pollock this week signals that the lieutenant governor is continuing to push for those investigations while he still could face a public hearing by the legislature, where both of his accusers have said they would be willing to testify.

In the letters to the district attorneys' offices in Suffolk County, Massachusetts, and Durham County, North Carolina, obtained by CNN, Pollock specifically asks for criminal investigations to be launched.

In the letter to Ian Polumbaum, the assistant district attorney in Suffolk, Pollack gives a lengthy defense of Fairfax and requests that at the end of the investigation the results be made public.

"An objective and thorough investigation of that allegation should be conducted, and the results reported to the public," Pollack writes. "Just as no serious crime should go unprosecuted; no innocent person should have his reputation tarnished by a false accusation."

Pollack also tells Polumbaum that Fairfax is willing to sit for an interview regarding the claims and testify under oath about his recollection of the events. He also writes that he hopes Fairfax's accusers are willing to do the same.

The letter also details in specificity evidence that Fairfax believes points to his innocence. That includes his claim that he sat for and passed a polygraph test and, in the case of the accusation from Tyson, that she did not come forward publicly until it was possible that he may ascend to the governorship because of the Northam scandal.

Both Watson and Tyson have resisted formally requesting a criminal investigation into their claims and have stopped short of pressing charges against Fairfax. They both prefer the matter be handled by the Virginia General Assembly and have said they would be willing to testify publicly in a bipartisan hearing. House Republicans have called for a hearing, but House Democrats have said the proceeding runs the risk of becoming a partisan circus.

Lawyers for both women responded Thursday to the Fairfax letter.

"If Justin Fairfax wanted the public to know the truth, he would have welcomed the hearing in the Virginia legislature requested by Ms. Tyson & Ms. Watson. All parties will testify under oath and present witnesses. That is the last thing in the world Fairfax wants and he has fought it at every turn," Nancy Erika Smith, attorney for Meredith Watson, said. "Fairfax’s changing story speaks for itself. First: the rapes didn’t happen. Then: the sex was consensual. His new claim - never before made - that Ms. Watson engaged in the crime of blackmail, is defamatory.

"Ms. Watson, who unlike Mr. Fairfax has always been consistent, didn’t want to put herself or Fairfax’s family (she knew his wife at Duke) through the public revelation of another rape allegation, so she gave him the opportunity to resign. Ms. Watson never threatened to sue Fairfax and never demanded money or favors. When Fairfax refused to step down, Ms. Watson felt that Dr. Tyson and the public deserved the truth."

She also addressed other points raised in Fairfax's letter:

1. The claim that there was “elapsed time” before Ms. Watson told others about the rape is false. There was no “elapsed time” between Fairfax’s rape of Meredith Watson and her revealing it to several people who have already publicly confirmed her immediate report. Then, Ms. Watson repeatedly told others over the following years, people who have publicly confirmed it. Before Fairfax was elected, Ms. Watson emailed a person working on his campaign and revealed the rape. All of this evidence has been reported.

2. Justin Fairfax – a lawyer – pushing the alleged polygraph results is an insult to the public. Mr. Fairfax is well aware that the highest court in Virginia has made it clear that so-called lie detector tests are wholly unreliable and inadmissible. Gary Ridgeway – who murdered 49 women – passed a lie detector test that an innocent man had failed. So did convicted spy Aldrich Ames. It’s shameful for Fairfax and his lawyer to push such voodoo out as relevant.

3. Of course, Fairfax wants a secret, months- or years-long criminal investigation that he will use as an excuse not to answer any questions in public. He says he wants due process, but a hearing is due process. He still refuses to answer questions – as both accusers have done. Instead, he has his lawyers issue letters full of false and defamatory claims.

"[The letter] shows his lack of respect for survivors of sexual violence," her attorneys wrote. "As a former prosecutor, the Lieutenant Governor certainly knows that potential targets of criminal investigations do not get to direct prosecutorial decisions. Like the bogus demand he made in February 2019 for the FBI to investigate Dr. Vanessa Tyson’s sexual assault allegations against him, Lieutenant Government Fairfax knows full well that his demands that the District Attorney take action will go unanswered. Despite his protestations about the unfairness of litigating such serious allegations in the press, his letter’s distorted presentation of facts is intended to do just that.

"We also note that on February 14, 2019, Lieutenant Governor’s spokesperson threatened that Mr. Fairfax would file his own criminal complaint against Dr. Tyson if she pressed criminal charges against him in Massachusetts. That threat, like others he has conveyed to sue Dr. Tyson, will not deter her from doing what’s right, but have undoubtedly been leveled by Mr. Fairfax to deter others from coming forward. His letter to the District Attorney appears intended to do the same and is a crude effort to deny agency to survivors of sexual violence. His suggestion that women are liars unless they press criminal charges against their assailants places an unfair demand on survivors and shows a fundamental misunderstanding of the criminal justice system. Pursuing criminal charges is a weighty decision that the vast majority of survivors choose not to make for legitimate reasons. Lieutenant Governor Fairfax would force survivors to rely on the criminal justice system to defend their credibility, or else remain silent about the trauma they have experienced.

"The criminal justice system is not the only way government officials like Lieutenant Governor Fairfax can be held accountable for their actions. The Virginia General Assembly has its own independent responsibility to ensure that Virginia’s leaders have the character and temperament to represent the Commonwealth. Lieutenant Governor Fairfax’s letter shows yet again that he is not deserving of his position of power."