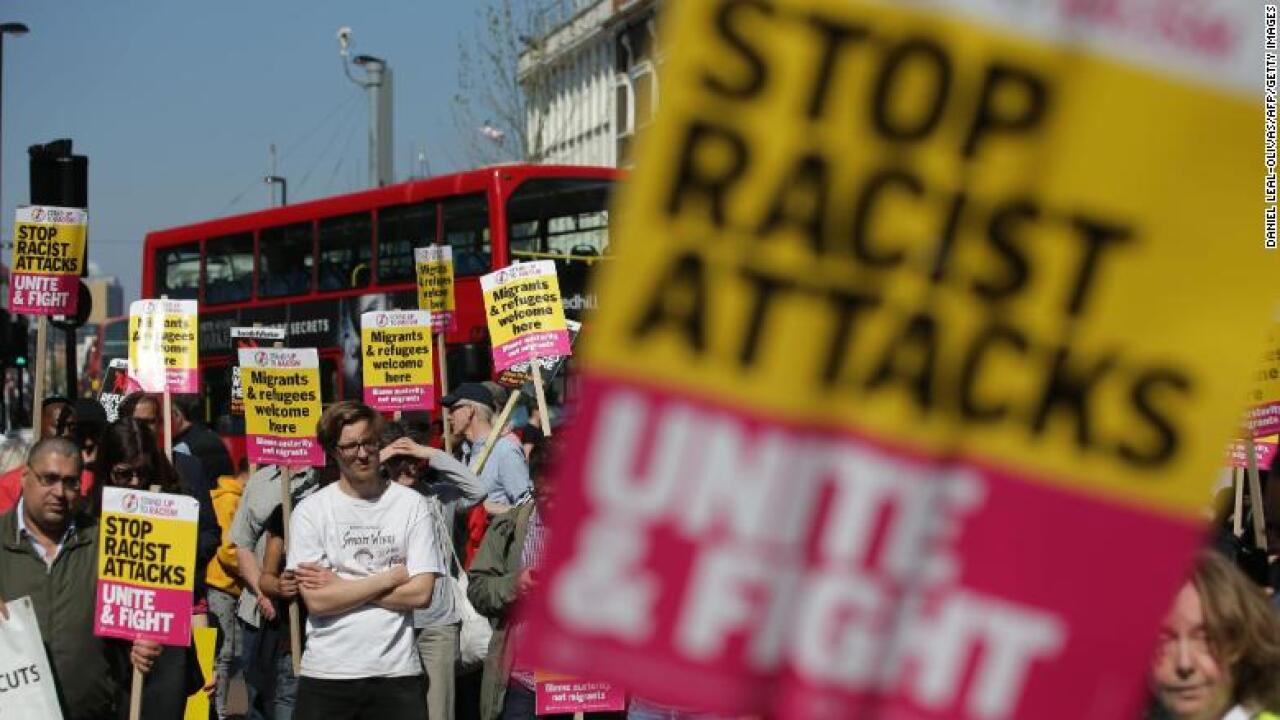 Demonstrators at an anti-racism protest in south London in 2017.

Demonstrators at an anti-racism protest in south London in 2017.

Children as young as 10 are whitening their faces to avoid being subjected to racist abuse in Britain, a child protection group has warned, as police struggle to stem a rising tide of hate crimes against minors.

A total of 10,571 racially-motivated hate crimes against children — an average of 29 a day — were recorded by police in 2017-18, the National Society for the Prevention of Cruelty to Children (NSPCC) found. Toddlers and even babies were among those targeted.

That number is now a fifth higher than it was just three years ago, and is growing at a rate of about 1,000 new crimes a year.

The charity’s report, based on police records in regions across Britain, highlights the scale and breadth of racism in the deeply divided nation. Since the Brexit referendum in 2016, the crisis has swelled so severely that children yet to reach their first birthday are counted among the victims.

The group also said that children using their Childline service are suffering verbal racist abuse in public, and are resorting to drastic measures in an effort to stem the attacks.

“I’ve been bullied ever since I started school. The bullies call me nasty names; it makes me feel so ashamed. My friends won’t hang out with me anymore because people started asking why they were friends with someone who had dirty skin,” one 10-year-old girl said in a statement provided by the NSPCC.

“I was born in the UK but bullies tell me to go back to my own country. I don’t understand because I’m from the UK. I’ve tried to make my face whiter before using make up so that I can fit in. I just want to enjoy going to school.”

The findings mirror an overall rise in racist hate crimes in the UK, which jumped significantly after the Brexit vote and have not subsided since. A total of 71,251 were recorded in England and Wales in 2017-18, a 14% increase compared to the previous year.

Hate crimes based on victims’ sexual and gender orientations, religion and disabilities are all rising rapidly as well, but race-based attacks still constitute the majority of hate crimes — with an average of eight such crimes reported an hour.

The NSPCC obtained the figures on hate crimes against children through Freedom of Information requests, which were sent to every police force in the United Kingdom. Thirty-eight of the 43 forces responded.

“Childhood bullying of this nature can cause long-term emotional harm to children and can create further divisions in our society,” Childline head John Cameron said.

Atiyah Wazir, a counselor for the telephone service, added: “Over the eight years that I’ve volunteered as a counselor it is just as heartbreaking every single time a child tells you they wish they looked different.”

“These children have been made to feel shame and guilt and sometimes daren’t tell their mums or dads about it because they don’t want to worry or hurt their feelings. I want every child to know that this bullying is not OK, they have nothing to be ashamed of, and Childline is always here to listen.”