Tornado hammers town in Kansas. Dozens of homes ‘all gone’ 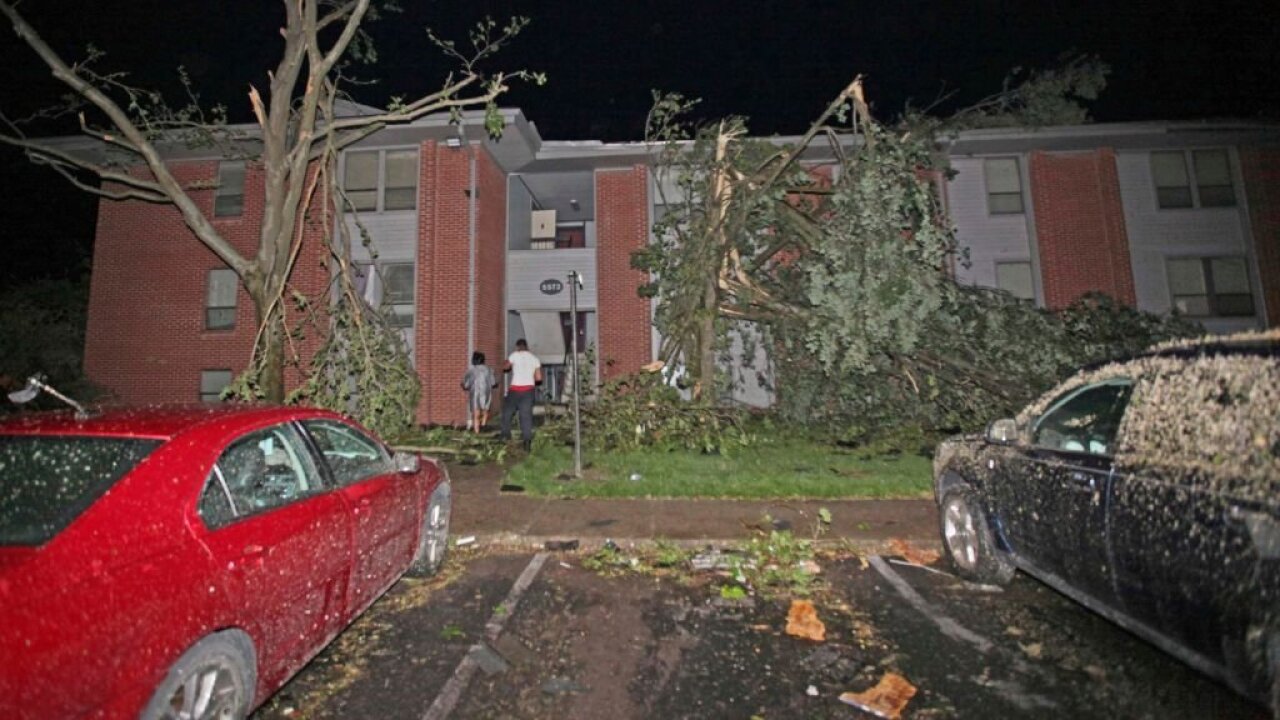 A large tornado touched down Tuesday in Kansas, striking the southeast portion of Lawrence, according to the National Weather Service.

Along with twisters in Ohio and scorching heat in the South, the Kansas tornado was part of the severe weather engulfing parts of the country.

While residents in Linwood, Kansas, 15 miles east of Lawrence, appeared to be safe, dozens of homes just outside city limits are “all gone,” Linwood Mayor Brian Christenson told CNN in a phone interview.

Christenson said he sheltered in his basement along with about 20 other residents as the tornado moved through shortly before 7 p.m. The mayor said crews and residents are out helping each other in Linwood.

“We have local crews moving stuff around. City crews are moving with tractors, a lot of civilians are helping cut trees off cars and off houses,” he said.

The mayor, who surveyed the damage, reported seeing roofs torn off of homes.

In Lawrence, police said most of the structural damage appears to have occurred near Lawrence. But downed trees and power lines, and debris make some Lawrence roads impassable. The storm debris closed the airfield at Kansas City International Airport, delaying flights, the airport said.

Some 15,000 customers were without power in Douglas and Johnson counties, according to Westar Energy Communications spokeswoman Kylee Slavens.

A band of severe weather damaged a New Jersey high school Tuesday night while an event was going on in the school’s gymnasium but nobody was injured in the incident, an official with the Sussex County Sheriff’s office told CNN.

Cpl. Mark Vogel said people were being safely evacuated from Lenape Valley Regional High School. He declined to say how many people were inside at the time.

In the wake of the storm, the school will be closed Wednesday and there will be no after school activities, according to the school’s website.

More than 14,000 customers in New Jersey were without power, according to FirstEnergy’s website.

Dozens of tornadoes reported this week

More than 500 tornado reports have been made across the nation in the last 30 days.

There are only four other recorded instances when more than 500 US tornadoes were observed in a 30-day period: in 2003, 2004, 2008 and 2011, according to Patrick Marsh, a meteorologist with the weather service’s Storm Prediction Center.

In Tulsa, Mayor G.T. Bynum warned residents earlier Tuesday to prepare for the “worse-case scenario” of potential flooding as more rain is expected in the Oklahoma city.

The Army Corps of Engineers has been releasing about 275,000 cubic feet of water per second from the Keystone Dam, about 20 miles west of Tulsa — which is the equivalent of three Olympic-sized pools — to keep Keystone Lake from topping the floodgates.

Doing so will increase the strain on some of Tulsa’s levees, Bynum said.

Bynum said it’s too early to tell how the storms expected late Tuesday and possibly Wednesday could impact the release of water from the Keystone Dam. He urged residents to prepare for record levels of water release from the dam.

“We are planning for and preparing for the flood of record, and we think everybody along the Arkansas River corridor ought to be doing the same,” Bynum said.

The mayor said the levees “continue to operate as they’re designed.”

Members of the Oklahoma National Guard are walking the levees to check the conditions, he said. Bynum said while “it’s high risk,” it’s not an emergency between the levees. He encouraged those living near the levees to temporarily relocate.

The release of water from the Keystone Dam is contributing to flooding, however, near Sand Springs, just west of Tulsa. Scores of homes there were surrounded by floodwaters, and some homes had 2 to 6 feet of water in them, residents told a CNN crew there.

“It’s been a complete upheaval of our life and everything the last six days, and we don’t know when it’s going to end,” Herrington told KOTV.

The weather service warned of “very large hail” and tornado threats for Tulsa.

Oklahoma’s rainfall from January 1 through Monday was 50% above normal — making this the fourth wettest year to date on record, according to the Oklahoma Climatological Survey.

On the heels of a week of deadly weather in the central United States, Tuesday threatened more of the same, including possible severe storms in the Plains, South, Midwest and Northeast; dangerous flooding in many states; and a suffocating heat wave in the Southeast.

In western Ohio, crews began cleaning up Tuesday after storms and tornadoes left swaths of devastation overnight, killing at least one person and injuring dozens

At least three tornadoes were believed to have caused severe damage Monday night in western Ohio, including one in the city of Celina, where one man was killed and seven others were injured, Mayor Jeff Hazel said.

The storm apparently pushed a vehicle into a house there, killing Melvin Dale Hanna, 81, Hazel said.

Ohio Gov. Mike DeWine on Tuesday declared a state of emergency for three counties impacted by the severe weather.

Aerial drone footage above Celina — roughly 70 miles northwest of Dayton — showed houses destroyed, with wood and other debris scattered for acres near a pond there Tuesday morning.

Two tornadoes also are believed to have slammed the Dayton area Monday night just 30 minutes apart, and both crossed Interstate 75 near the city, the National Weather Service says.

One twister ripped through Michael Sussman’s home in Brookville, northwest of Dayton. He said he’d just walked into a hallway when a front room was blown apart.

“I was hit by debris in my head,” Sussman said. “I looked up and I no longer had a roof.” He and his daughter and her boyfriend, who were hiding in a bathtub, dodged swinging electrical wires and debris as they left.

“We went out in the streets and children were screaming and crying. Devastation everywhere.”

Correction: An earlier version of this story incorrectly spelled the name of Melvin Dale Hanna.