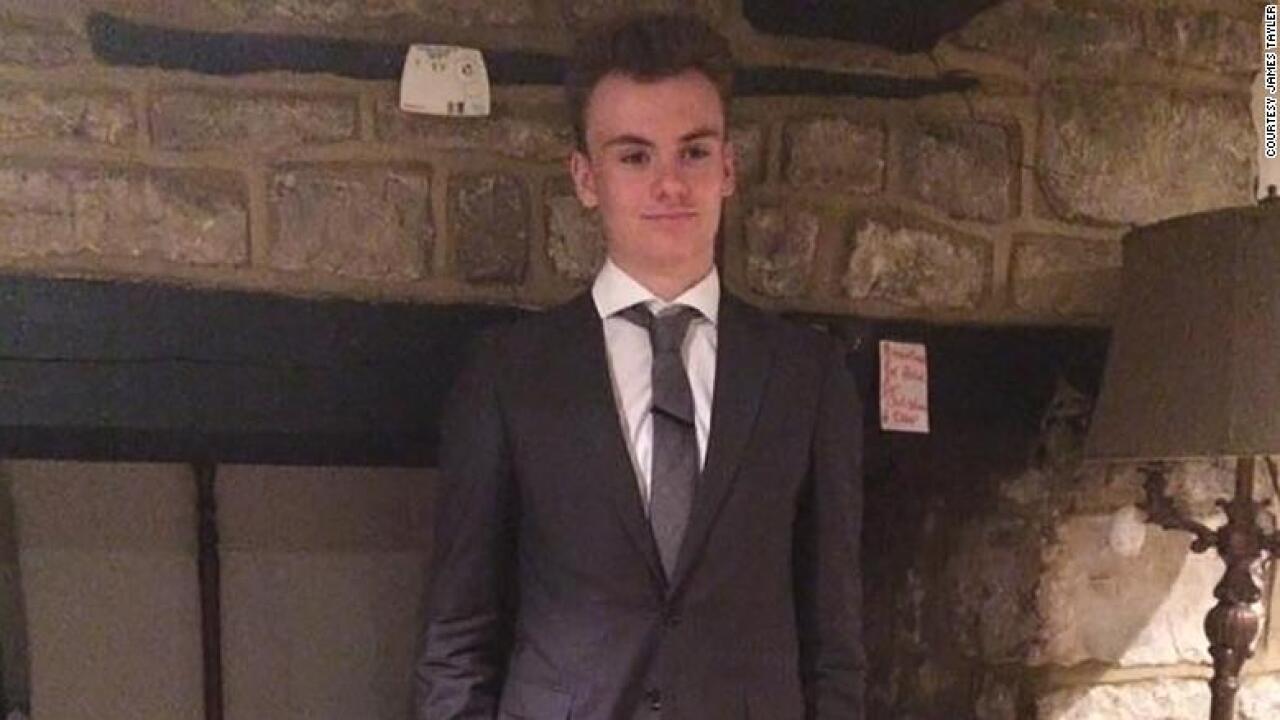 Jacob Tayler’s support for a young customer with autism has earned him praise.

Jacob Tayler’s support for a young customer with autism has earned him praise.

Right there, on the floor of the shoe store, the teenage clerk sat down and just talked to the girl with autism.

“He gently tried shoes on her and explained to her why they would feel different and in time they would soon feel OK,” the girl’s mom recounted in an email to the Clarks store in Bicester, England. “He sat patiently while she cried … He didn’t once make us feel like we were taking too long or being a nuisance.”

The tender scene has earned Jacob Tayler, 18, wide praise for his patience and sensitivity since his dad tweeted the “celebration alert” his son got last week from the shop for going “above and beyond” expectations during the March episode.

I'm ridiculously proud of both of my children, but my 18 year old son was presented with this at his Saturday job yesterday and I might be a little choked up. pic.twitter.com/BpNUY6098b

“Nobody mentioned she had autism,” Tayler told CNN. “I just went over and asked if I could be of help. She said, ‘Yes, please.’ I did my best to help her.

“I’m trained to work with people with autism and disabilities, so I told her not to worry, saying I would stay with her and she wouldn’t have to wait a while. I know how traumatic it can be for people with autism in a busy place,” he said, referring to what some call sensory overload.

The girl’s mother highlighted how Tayler, who works Saturdays at the store, “didn’t mention or acknowledge the situation but just sat in the floor and started talking to my daughter.”

“I tried to be very gentle with the girl,” Tayler recalled. “When she asked for shoes, I ran to get them as soon as possible and reassured her it was OK. When I was touching her feet, I explained why it might feel different from her other shoes.”

Tayler’s father, James Tayler, tweeted the store’s congratulatory message, saying he was “ridiculously proud” of his son. The tweet went viral, with more than 100,000 likes and thousands of retweets.

Among the respondents was Dawn Brown, the girl’s mother, who’d emailed Clarks.

“Teens today are given bad press, not enough praise. I am so so happy that Jacob got this recognition, he totally deserves this,” she tweeted. “Most people only email/phone to complain these days. I like to go the other way and spread the praise and recognition.”

No thanks required James, but oh my it just goes to show that everyone loves a little bit of kindness. It works all ways if you receive it, then share it. speechless at how this post has taken off. I'll ask Jacob for his autograph when we next buy shoes ☺️

Jacob Tayler has worked with the children’s charity, Barnardo’s, since he was 16, he said. On school holidays and through summer camps, he’s learned sign language and non-verbal communications, such as the Makaton language.

“I do really enjoy working with children with autism and helping children in need,” he said.

Jacob plans to spend three months abroad this summer helping people with disabilities, then to apply for an apprenticeship as a firefighter, he said. He’s also pondering whether to take a full gap year and work in a school for children with autism.

James Tayler told CNN he was “bowled over and delighted that Jacob had been recognized.”

“It’s also helped us to begin conversations with a few people about training people in retail roles to have more awareness of (autism spectrum disorder) and how to make people feel comfortable,” he said. “I would love all children to learn sign language. It could be taught from a really early age, and think of the benefits.”

“We’re so pleased to see Jacob’s great customer service being recognized,” a spokesperson said. “All our store colleagues are trained in providing first class service to all consumers, and we are particularly proud that we are able to create a comfortable shopping environment for those on the autistic spectrum.

“We have provided quiet hours in our stores for some time, and in 2019, will be implementing a quiet hour in the majority of our stores every day. Clarks recognizes and celebrates individuality and we are proud to see our company values being so well expressed by store colleagues.”