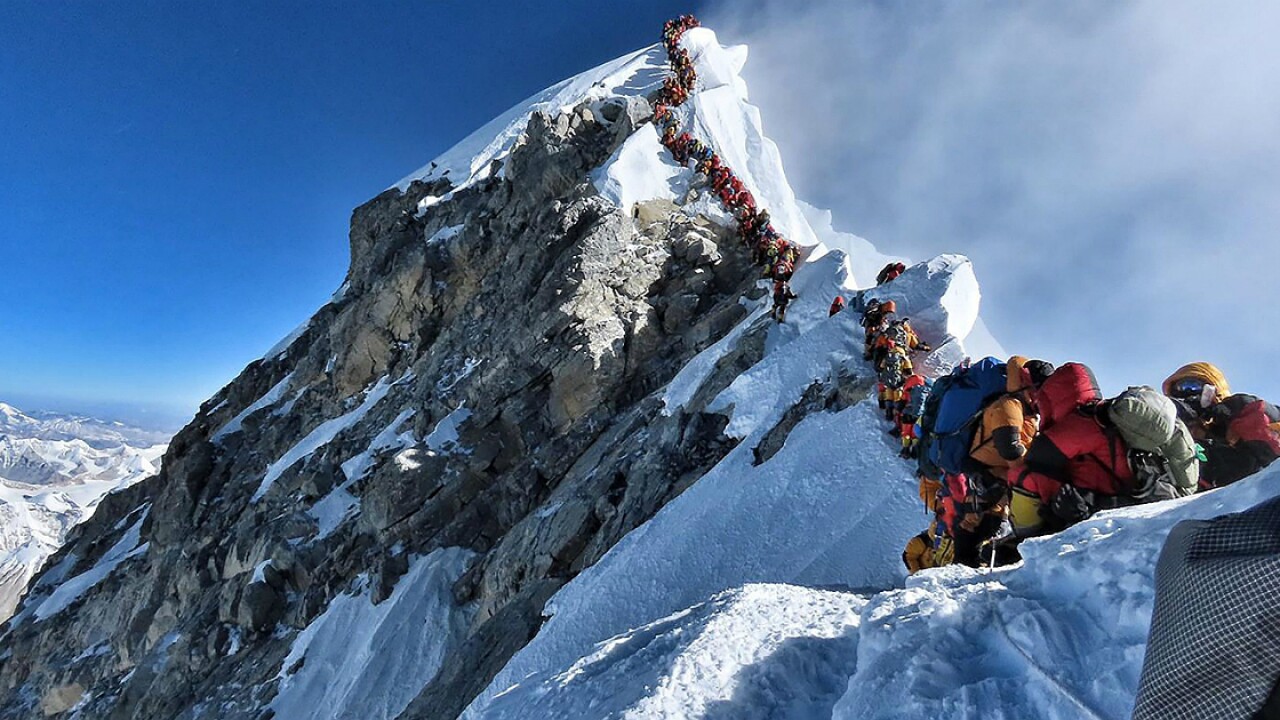 Our helicopter lands in Lukla, a small town best known for being the gateway to Mount Everest.

Tucked into the green cascading foothills of Nepal’s Himalayas, it boasts a single hair-raisingly short runway, rumored to be one of the most dangerous landing zones in the world.

A handful of climbers are waiting for their flights out. Those who attempted to or have successfully summited Everest are easy to identify by their sunburnt faces and visible exhaustion.

There we refuel and pick up Tshering Pamde, a Sherpa by trade, who has summited more times than he can remember. He brings oxygen tanks. We have been warned that altitude sickness can hit like a brick, and even though we are only going to base camp, that’s still at 5,500 meters or 17,500 feet.

As we fly off, he pulls out his phone and shows us a picture of himself and a climber dangling at the end of a helicopter’s rope. “This man was stranded,” he says. “He fell into a crevasse at Camp 1.”

Small talk here revolves around such stories: Grinning climbers with frostbite, showing their blackened fingers but refusing to leave the mountain. Climbers who tried to keep going despite hacking coughs that shattered ribs. Climbers who were about to collapse, but kept going with the voice of their loved one crackling through a radio.

There is no time to spare. The Everest climbing season is only a few weeks long. This year, that period has proven especially lethal, with 11 climbers already dead of about 600 people(including guides and porters) who made it to the summit this year.

Last week, Nirmal Purja posted a photograph showing a long line of climbers waiting to reach the summit in what is known as the “death zone” — an area so high that each inhaled breath contains only a third of the oxygen you’d get at sea level. Up there, the human body slowly begins dying.

Deaths on Everest tend to fall into three categories: Fatal altitude sickness, high altitude pulmonary edema (HAPE, in which your lungs fill with water due to a lack of oxygen in your blood stream), or high altitude cerebral edema (HACE, an accumulation of fluid in your brain.)

As our helicopter descends and lands at base camp, the altitude hits like a ton of bricks. Breathing is like trying to suck in air with an elephant sitting on your chest. Just a few steps sends your head spinning.

The season has already ended. Gone is the sea of tents, the bustle of climbers waiting to find out if they will be able to take on one of the world’s largest and toughest peaks. The camp is mostly deserted, save for cleaning crews and a couple of climbers who were among the last to make it down.

Seventeen-year-old Mrika Nikqa and her father Arindi, from Kosovo, say they decided to wait for a later weather window because of the earlier crowds.

“Well, it felt awesome,” Mrika says of their ascent to the summit. “It was pretty good. We had to wait for like nine days at Camp 2 because of some problems. And those days were a lot of traffic and stuff but when we summited it was only us. We had good weather. We summited for nine hours.”

Her father is proud, supportive of his daughter’s dream: She aims to be the youngest person to finish what’s known as the “seven of seven” — summiting the seven highest peaks on all seven continents — before she turns 18. But it was not a trek without concern.

“We saw dead bodies along the way. I think that maybe this could reflect negatively on her — she’s only 17 — but no, she passed that,” Arindi says.

“You know what, when you decide to come and climb Everest, you prepare yourself that you are going to see dead bodies,” Mrika adds. “Maybe something can happen to you, your father, or whoever you’re climbing with, so you prepare. You see a dead body and it’s like, it’s ok. He’s gone. I don’t want to be like him; I have to move on.”

No experience needed for permits

This season was a perfect recipe for summit disasters: Overcrowding, severe weather which resulted in only a few viable summit days, and growing numbers of inexperienced climbers.

Nepal’s government denies that fatal inexperience and overcrowding were the result of its permit process. Danduraj Ghimire, Director General of the Nepal Tourism Department, blames the weather for causing climbers to rush the summit at the same time, noting that the dangerous traffic jams do not occur every day.

Ghimire said that only nine more permits were issued this year, compared to last year. Each costs about $11,000. While Nepal currently does not have any experience requirements for climbers purchasing permits, the government is thinking about changing that, he notes.

Blame for the deaths on the world’s highest peak has been directed at the government, climbing companies and the climbers themselves.

Pasang Tenzing Sherpa, who has been a guide on the mountain for years, says climbers must listen to their own bodies. He and a private client waited for the crowds to thin out this year to avoid being caught in the queues.

“There was of course some traffic on the way up, I mean quite a long traffic jam. But as long as you know the techniques, how to pass the traffic, it doesn’t matter how much there is,” he says. “The important thing is the oxygen.”

He says problems arise when too many inexperienced climbers haven’t mastered the correct techniques: They push themselves too hard, and don’t know how to manage their oxygen.

“There were people who shouldn’t be at all on the mountain, there were people I felt really sorry for,” he says. “It looks like they had never been to other mountains except Everest.”

Nirmal, the climber who took that now viral photograph, says the mountain itself quickly throws a climber’s hubris into perspective.

“You think you are superhuman,” he says. “But when you get there, nature has bigger plans.”