When an Oregon man collapsed while mowing his lawn, firefighters finished the job for him 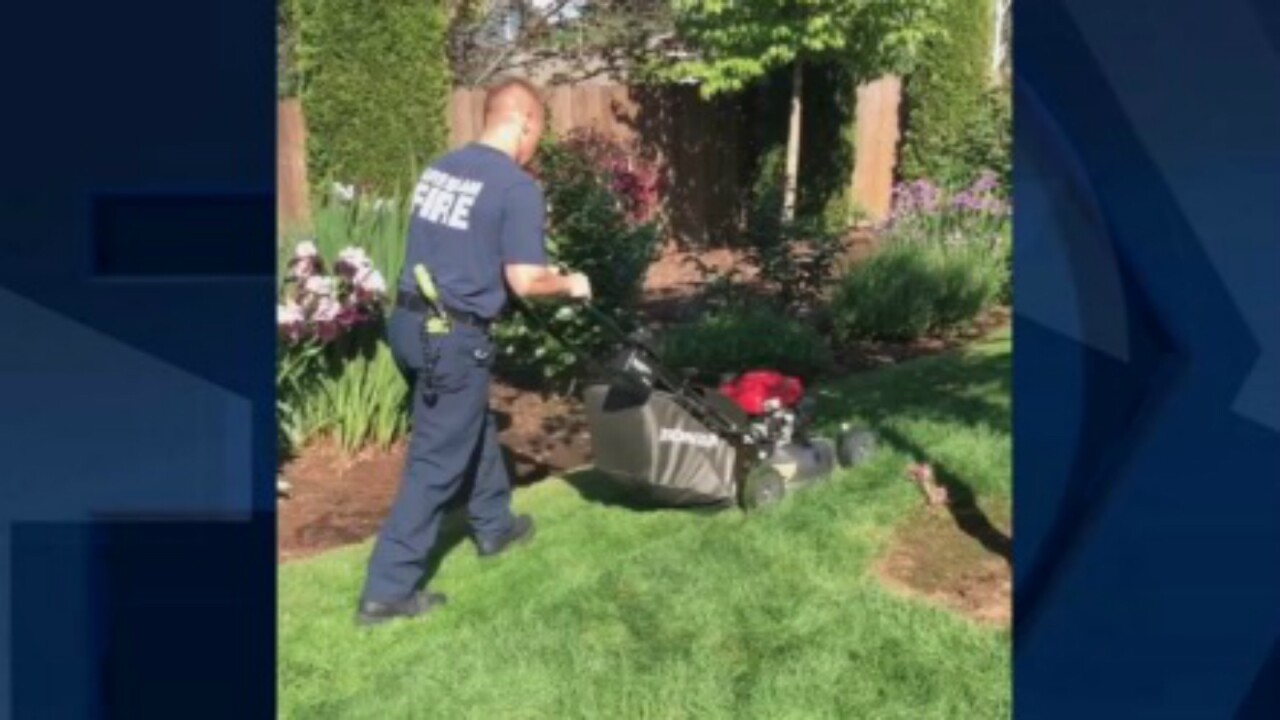 GRESHAM, OR (KPTV) — So often first responders are there on our worst days, when lives are left hanging in the balance. But Gresham firefighters are trying to better those moments and give a glimpse of hope in what otherwise would be a tough time.

Thursday afternoon was a pretty tough one for a Gresham couple. JoAnn Weeks said her husband Steve had gone outside to mow the lawn.

She said she started crafting and came back about an hour later looked out the kitchen window and saw that her husband had collapsed.

“I looked out the window and I could see him lying on the ground just flat out like he was dead, it was horrible,” Weeks said.

She went outside to check on him before calling her son and 911.

“I started touching his face and he was kind of semi-conscious and I said, ‘Are you OK? Are you OK?’ He said, ‘Yeah I’m just really dizzy,’” Weeks said.

Gresham firefighters headed to the scene. They arrived quickly taking Steve to the hospital by ambulance.

“Steve said something, he was joking about when they got him up on the gurney he says, ‘Well I hope you guys are going to stick around and mow my lawn’ and they just laughed,” Weeks said.

With Steve on his way to the hospital JoAnn and her son gathered a few things and got ready to meet him at the hospital.

“I got my purse and stuff, and I heard the lawn mower start and thought they must be putting it away,” Weeks said.

She looked up and out the same window she’d seen her husband collapse, surprised at what she saw.

“He was mowing our lawn and I could not believe it that he would do that it was just, those guys are unreal that they did that for us,” Weeks said.

“We were starting to load our rig up and I asked the driver, I’m like, Hey where is Erik at?’ And he was like, ‘Erik is back cutting the grass,’” Lt. Jeffrey Hairston with Gresham Fire Dept. said.

“It just touched,” Weeks said. “I think it is just amazing that that is how much they care about people.”

“I just looked around and saw the lawn mower sitting there and maybe a six-foot strip that he had started mowing and I thought this was an opportunity to help out a community member,” Erik Olson with Gresham Fire Dept. said.

It was a small gesture that will have such a lasting impact.

“If you see an opportunity to make a difference for someone, take it,” Olson said.

“I am just grateful that they care that much about people that they really do, they really put everything out there,” Weeks said.

For Steve, he is doing well. He said he is very thankful for those first responders who came to help.

He and his wife said they’d like to meet those firefighters someday to thank them in person.