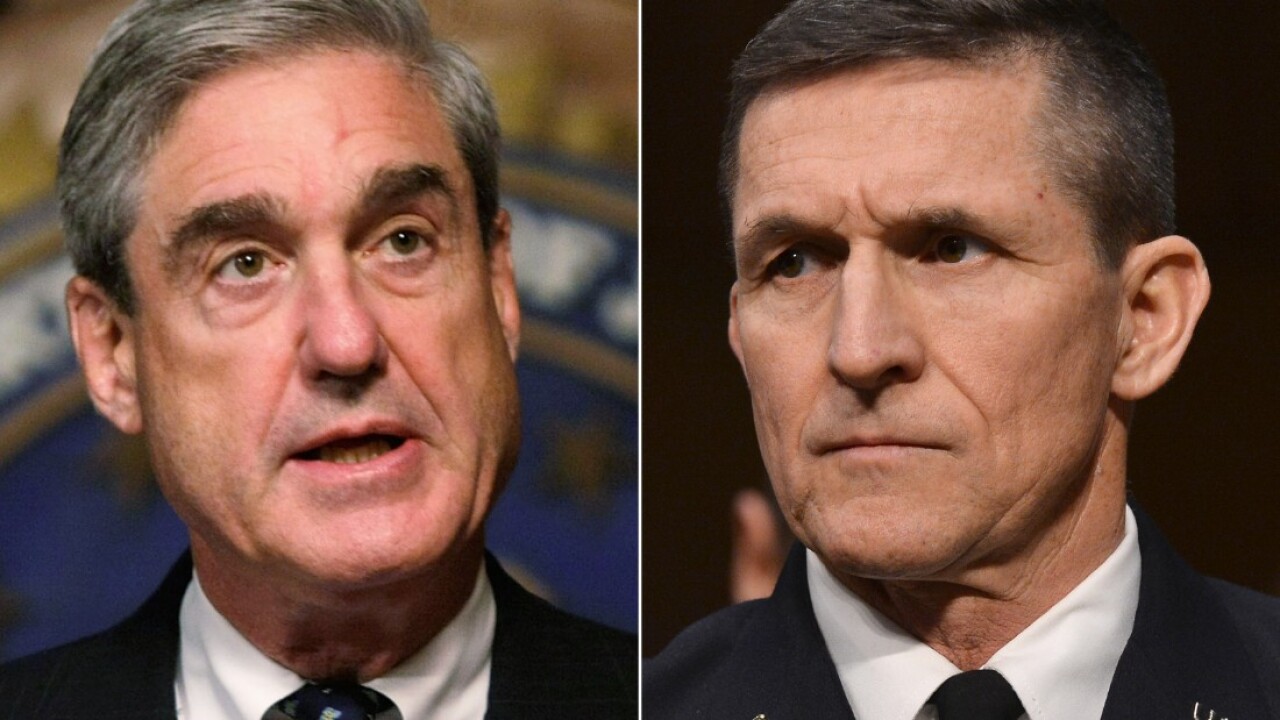 Michael Flynn’s dealings with Robert Mueller erupted back into the headlines this week, after court documents disclosed he had told the special counsel about communications he had with people around Donald Trump related to his cooperation.

The revelations add some nuance around Flynn’s time as a cooperator and raise several new questions about Mueller’s obstruction probe.

Here are 9 questions to get up to speed:

People “connected to the administration or Congress” left a voicemail for Flynn or his lawyer that “could have affected” his cooperation with Mueller, court records revealed on Thursday. Flynn gave Mueller a recording of that voicemail as part of his assistance to the Mueller probe.

The Mueller report mentions a voicemail that fits that description. The report says a call to “Flynn’s counsel” was made in November 2017 — days before Flynn formally pleaded guilty — and it came from “the President’s personal counsel,” without naming names.

In the call, Trump’s attorney obliquely referenced Flynn’s cooperation, asked for a “heads up” if he would implicate Trump, and said he should remember Trump’s positive feelings toward him.

“If… there’s information that implicates the President, then we’ve got a national security issue…we need some kinds of heads up,” Trump’s lawyer told Flynn’s lawyer, according to the Mueller report. “Just for the sake of protecting all our interests if we can… remember what we’ve always said about the ‘President and his feelings toward Flynn and, that still remains.'”

Who made the call?

The Washington Post reported on Thursday that this call was made by John Dowd, who was one of Trump’s personal attorneys. Dowd could not be reached by CNN for comment.

Jay Sekulow, Trump’s only other personal attorney handling the Russia investigation at that time, told CNN that he did not leave the voicemail referenced in the Mueller report. Other lawyers around Trump, like then-White House special counsel Don McGahn and White House counsel Ty Cobb, worked for the administration and would not have been labeled as Trump’s “personal counsel” in the report.

Is this obstruction of justice?

Mueller’s team didn’t say whether this phone call amounted to criminal obstruction of justice committed by the President. But Mueller clearly considered that the phone call may have been an obstructive act, writing in his final report, “That sequence of events could have had the potential to affect Flynn’s decision to cooperate, as well as the extent of that cooperation.”

Mueller didn’t offer a judgment in his report or in the court filings about how Dowd approached Flynn. There is no indication from the Mueller report that Trump’s attorneys were even investigated for crimes. Any speculation that Trump’s lawyers broke the law with this phone call appears to be a bit ahead of the facts.

If Mueller believed he could investigate Trump’s attorney, and if he believed that the call did cross the legal threshold for obstruction, Mueller or another prosecutor could have brought charges. The investigation is over, and nobody was charged with crimes related to this voicemail.

Why didn’t Mueller get to the bottom of it?

It’s not entirely clear why Mueller didn’t analyze Dowd’s decision to make the phone call. Was it that Mueller only wanted to look at the President’s actions — and not others’ — around this particular event? Did Mueller want to avoid a court tangle with Dowd?

A footnote suggests Mueller determined any interaction Trump may have had with Dowd about Flynn as confidential and protected by law. “Because of attorney-client privilege issues, we did not seek to interview the President’s personal counsel about the extent to which he discussed his statements to Flynn’s attorneys with the President,” the Mueller report says. (It’s important to note that if Mueller wanted to pursue more investigation into the call as a possible crime, he may have been able to breach the confidentiality. Attorney-client discussions can’t stay sacred if a client is asking an attorney to commit a crime.)

Mueller ends his analysis of the voicemail inconclusively, saying he couldn’t determine if the President directed Dowd to make the call. “Because of privilege issues, however, we could not determine whether the President was personally involved in or knew about the specific message his counsel delivered to Flynn’s counsel.”

Did Mueller care about obstruction?

Mueller, a former FBI director, homicide prosecutor, US Attorney and Department of Justice top brass, cared a great deal about investigating obstruction of justice. The special counsel ultimately produced 182 pages that looked at 10 situations where Trump may have obstructed justice. Mueller found, in several of these instances, that Trump could have obstructed the investigation and had reason to want to — meaning Mueller detailed evidence to support obstruction charges. But Mueller refused to decide whether Trump should be charged, leaving that decision to Attorney General William Barr.

Mueller also wasn’t afraid of going after liars whose false statements could have muddled the investigation. In all, he secured six guilty pleas that involved lying to authorities — from Paul Manafort and Rick Gates, to Michael Cohen, George Papadopoulos and Alex Van Der Zwaan, and including Flynn, too.

Two other defendants in the Mueller probe have been charged with obstruction, and both of their cases are still unresolved. Those defendants are: Roger Stone for allegedly lying and threatening a witness and the Russian Konstantin Kilimnik allegedly reaching out to possible witnesses who could have testified against his business associate and former Trump campaign chairman Paul Manafort.

What else do we know about outreach to Flynn?

There was more communication with Flynn than the one voicemail described in the Mueller report.

Court filings indicate that there were “multiple instances” of contacts between Team Trump and Flynn’s camp, and Flynn provided investigators with information about these incidents.

The court filings also said someone “connected to… Congress” was in touch with Flynn about his cooperation. Based on the language in the memo from Mueller’s team, it appears that this could be a Hill staffer or political donor and may not be a member of Congress. The person hasn’t been identified yet, though that could potentially be revealed in future disclosures.

Why is this coming out now?

The voicemail Trump’s lawyer left for Flynn’s lawyer was highlighted in the version of the Mueller report made public on April 18. The report was so rich in detail and covered so many investigative threads that parts of it didn’t receive much initial scrutiny. For example: How Flynn’s attorney became a witness in the Mueller investigation, to discuss the voicemail with Mueller.

But scrutiny of Flynn is far from over. He has not yet been sentenced for his crime of lying to investigators, and federal Judge Emmet Sullivan has demanded transparency in his case.

The Washington Post had sued to make public some information that prosecutors put under seal in the Flynn case, and Sullivan agreed. That led to the Justice Department’s public disclosures on Thursday of previously redacted descriptions of his cooperation, and of FBI memoranda about their interactions with Flynn in early 2017.

What has Trump said about the situation?

Trump weighed in on the situation with a tweet Friday morning, saying: “It now seems the General Flynn was under investigation long before was common knowledge. It would have been impossible for me to know this but, if that was the case, and with me being one of two people who would become president, why was I not told so that I could make a change?”

The President didn’t mention the questionable backchanneling between his lawyer and Flynn’s lawyer. But his tweet was misleading on other fronts and lacked some relevant context.

It’s generally against Justice Department policy to publicly reveal ongoing cases, so it’s no surprise that the investigation was underway before it was “common knowledge.” Flynn personally informed senior members of the Trump transition team in January 2017 about the investigation, and so did his attorneys. But it’s not clear when exactly Trump was briefed.

While Trump wasn’t told by the Justice Department about the Flynn probe before taking office, he received at least two prominent warnings against hiring Flynn as national security adviser. President Barack Obama told him not to give Flynn a White House job during their post-election meeting. So did New Jersey Gov. Chris Christie, a Republican and one of Trump’s close allies during the 2016 campaign.

Senior Justice Department officials eventually warned the Trump White House about Flynn’s conduct, primarily that he lied to the FBI about his contacts with the Russian ambassador. The administration waited two weeks after getting that information before Trump forced Flynn to resign.

Will we learn more, and when?

It appears several more revealing documents about Flynn may be public by June. Sullivan ordered that the Justice Department disclose in Flynn’s court case the transcript of the voicemail and transcripts of Flynn’s conversations with Russian officials.

Mueller quoted the voicemail in his report, though he used many ellipses to clip sentences. And the full text of Flynn’s calls with then-Russian ambassador Sergey Kislyak during the Trump transition has never been revealed — and may still be classified. Mueller has only paraphrased the exchanges in those calls in his report.

And on top of all this, Sullivan has asked for the Justice Department to make public the parts of the Mueller report related to Flynn that are still redacted. The deadline is May 31.