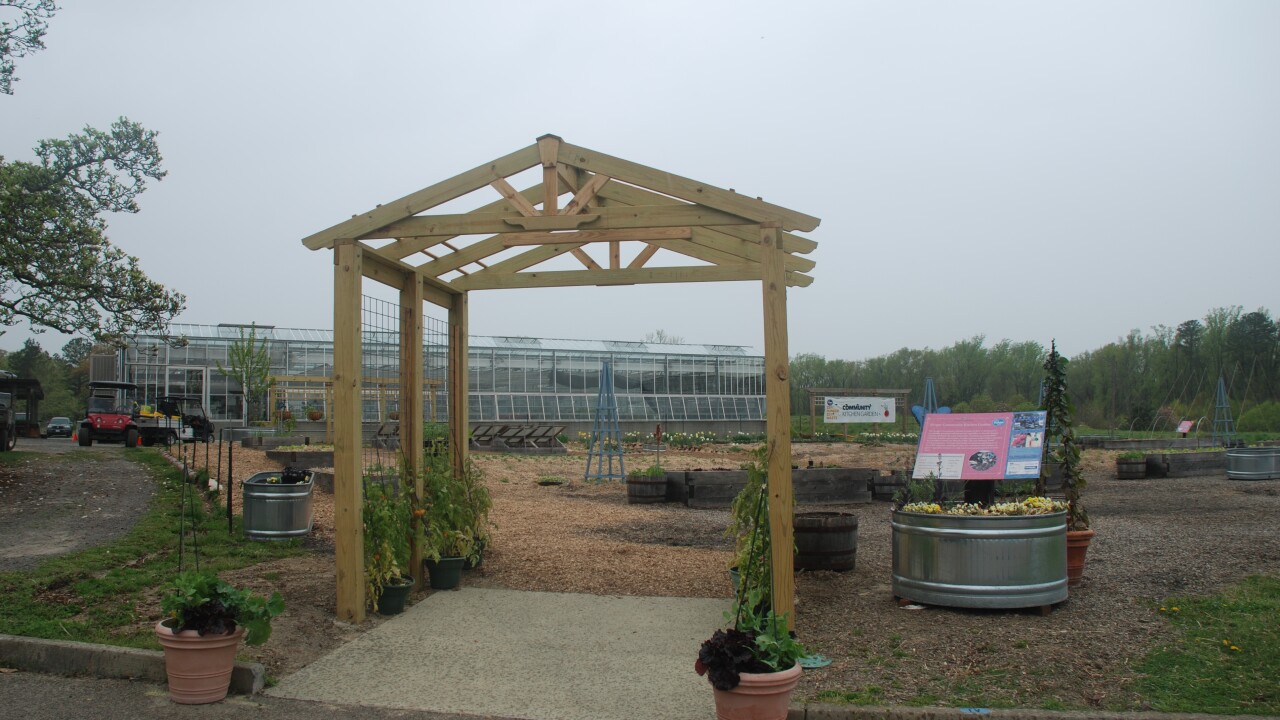 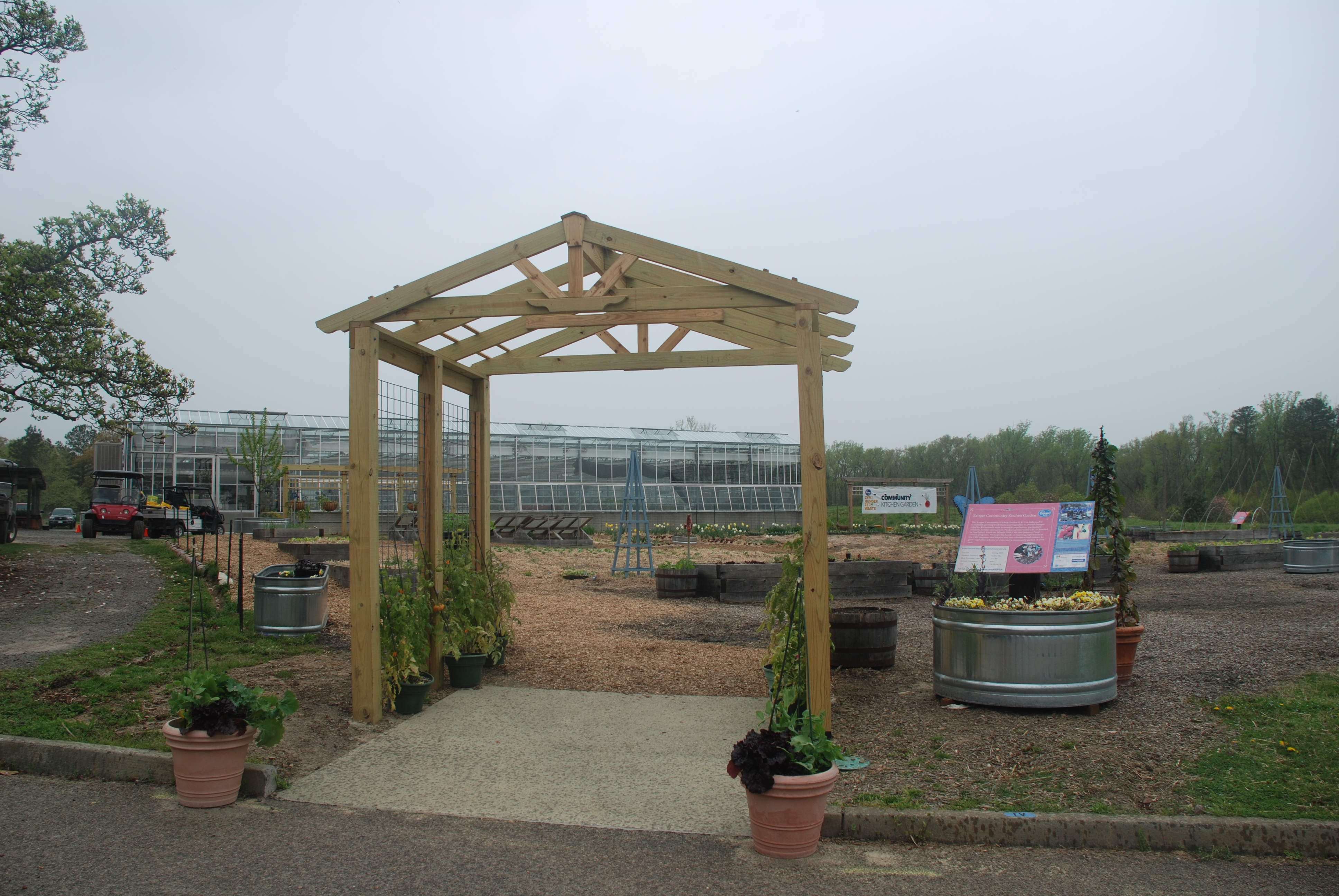 RICHMOND, Va. — Lettuce, turnips and beets — oh my! Vegetables and flowers sprout side by side in a bountiful garden in Northside Richmond. But the harvest is not going to a grocery store or market stand.

Instead, all of the crops will be donated to local food banks so low-income communities have access to fresh foods.

The Kroger Community Kitchen Garden, situated within Lewis Ginter Botanical Garden, is a major contributor to Feed More, the parent organization for food banks and other agencies fighting hunger in 34 counties and cities in Central Virginia.

In the past, food banks relied on nonperishable donations from supermarkets and other businesses. Today, many of the contributions are not rejects from retail, but fresh picked from local farms.

Farm-to-food-bank programs bring healthier options to people facing “food insecurity” — living without means or access to nutritious food. Such programs also offer producers an alternative market for the fruit and vegetables they have grown.

A national organization called Feeding America partners with food banks across the state, including Feed More in Richmond and the Blue Ridge Area Food Bank in Charlottesville, to create a network of hunger relief.

Annie Andrews, director of operations at Feed More, said the movement has redefined the support food banks can provide for struggling communities.

“Ten, 15 years ago, food banks were reliant on shelf stable product; you looked at it as a pantry. We’ve absolutely converted to fresh and perishable food,” Andrews said.

The need for food is not solved by a corner store that sells chips and hot dogs. Farm-to-food-bank programs aim to supply better quality food that doesn’t just fill hungry bellies but also provides nutrition to prevent health problems.

Greg Knight, food sourcing manager for the Blue Ridge Area Food Bank, said most people who rely on food banks are not unemployed but rather underemployed. Often, they must choose between which basic needs they can afford, he said.

“There’s not enough funds to cover the immediate basic needs — so that’s where we step in. At least we can provide a good supplemental box of food that will then be nutritious and alleviate some of the other pressures.”

The state and federal governments have encouraged farmers to help out.

In 2016, Virginia instituted a tax credit as an incentive for farmers to donate crops to regional, nonprofit food banks. In exchange for the donation, farmers receive a 30% tax credit equal to the market value up to $5,000 yearly.

Knight said the tax credit is a great way to support farmers and provide food for those in need.

“What I’m paying for the box is only a portion of what the farmer would get at market. So he can take the difference between the two — market price and what I’m paying — and that difference then becomes a donation for him,” Knight said.

On the national level, Congress passed the Agriculture Improvement Act of 2018 to allocate $867 billion in subsidies over the next 10 years to support farmers harmed by fluctuating markets or poor harvests. The food purchased by the U.S. Department of Agriculture from farmers is often resold to food banks like Feed More at a reduced cost.

The USDA reported that since 2012, about 10% of households in Virginia qualified as “food insecure.” Andrews said the definition of that term is constantly evolving and varies by area.

In a densely populated urban area, she said, it means “there are no grocery stores within a mile.” But in a rural area, food insecurity (or a “food desert”) means “there’s not a grocery store within 10 miles,” Andrews added.

“The gentrification of cities coming into play and people moving into the suburbs — that’s where you’re kind of pushing some of that working poor out,” Andrews said. She said Feed More is seeing a rising need for help in the suburbs — “what you wouldn’t think of as a food insecurity area.”

The Kroger Community Kitchen Garden at Lewis Ginter Botanical Garden and Shalom Farms in Midlothian are among the biggest farm donors to Feed More.

Laurel Matthew, senior horticulturist at Lewis Ginter, oversees the community garden and decides what to grow in collaboration with Feed More.

“We have six varieties of summer squash. We have four varieties of eggplant. Lettuce, beans, peas, you name it — we’re trying to get it in the ground,” Matthew said.

The Kroger Community Kitchen Garden is an urban gardening program that has harvested and donated over 50,000 pounds of produce to Feed More since it began in 2009.

The community garden is one-third acre funded in part by Kroger Mid-Atlantic under the company’s “Zero Hunger | Zero Waste” initiative. A volunteer base of 700 worked last year with on-staff horticulturalists to practice organic management of the garden and sustain a healthy harvest for the food bank.

Healthy Harvest Food Bank serves 12,000 people every month through 25 locations across six counties. In 2012, the food bank conducted a survey and found that 32% of its clients had diabetes.

The food bank partnered with Northern Neck-Middlesex Free Health Clinic and Virginia Cooperative Extension to begin a Healthy Food Pharmacy to teach clients with Type 2 diabetes how to prepare flavorful, nutritious meals to combat health issues. Participants in the eight-week class on average lowered their blood pressure by 17% and low-density lipoproteins cholesterol by 26%. (LDL is considered “bad” cholesterol because of its artery-clogging properties.)

Mark Kleinschmidt, president and CEO of Healthy Harvest Food Bank, said the Northern Neck and Upper Middle Peninsula region suffers from a culture of genetics and a lack of resources to escape the health crisis trap.

“We got a Food Lion and a Walmart, and there’s not that healthy options to eat at whatsoever,” Kleinschmidt said.

“For one, it’s not available. And two, it’s a cost issue,” Kleinschmidt said. “I think there is always going to be this issue. The Northern Neck will never be big enough to have a Kroger or a Harris Teeter or a Wegman that does have healthier options.”

Legislation to create the Virginia Grocery Investment Program and Fund was introduced to the General Assembly this session. It aimed to provide financial incentives for grocery stores to expand in food deserts.

After passing unanimously in the Senate, the bill died in the House of Delegates. A similar House bill was killed in a House subcommittee early in the session.

According to the USDA, 30-40% of food is wasted in the U.S. annually. Grocery chains such as Lidl have joined the movement against food waste by selling 10-pound crates of “ugly” produce for $2. Food banks are incorporating the “ugly food” movement into their means of sourcing quality food for people living in food insecure areas.

The Mid-Atlantic Regional Cooperative was created by Feeding America and stretches from New England to Virginia, providing nearly 1.5 million pounds of produce to food banks each month. The cooperative works to minimize food waste by purchasing “ugly,” rejected food at a large produce market. That produce is then sold back to a network of 23 food banks, including Feed More, for a reduced price.

“We offer the opportunity for [grocery stores] not to have an increased trash bill and to be able to do something good with the things that they aren’t able to use and sell,” Andrews said.