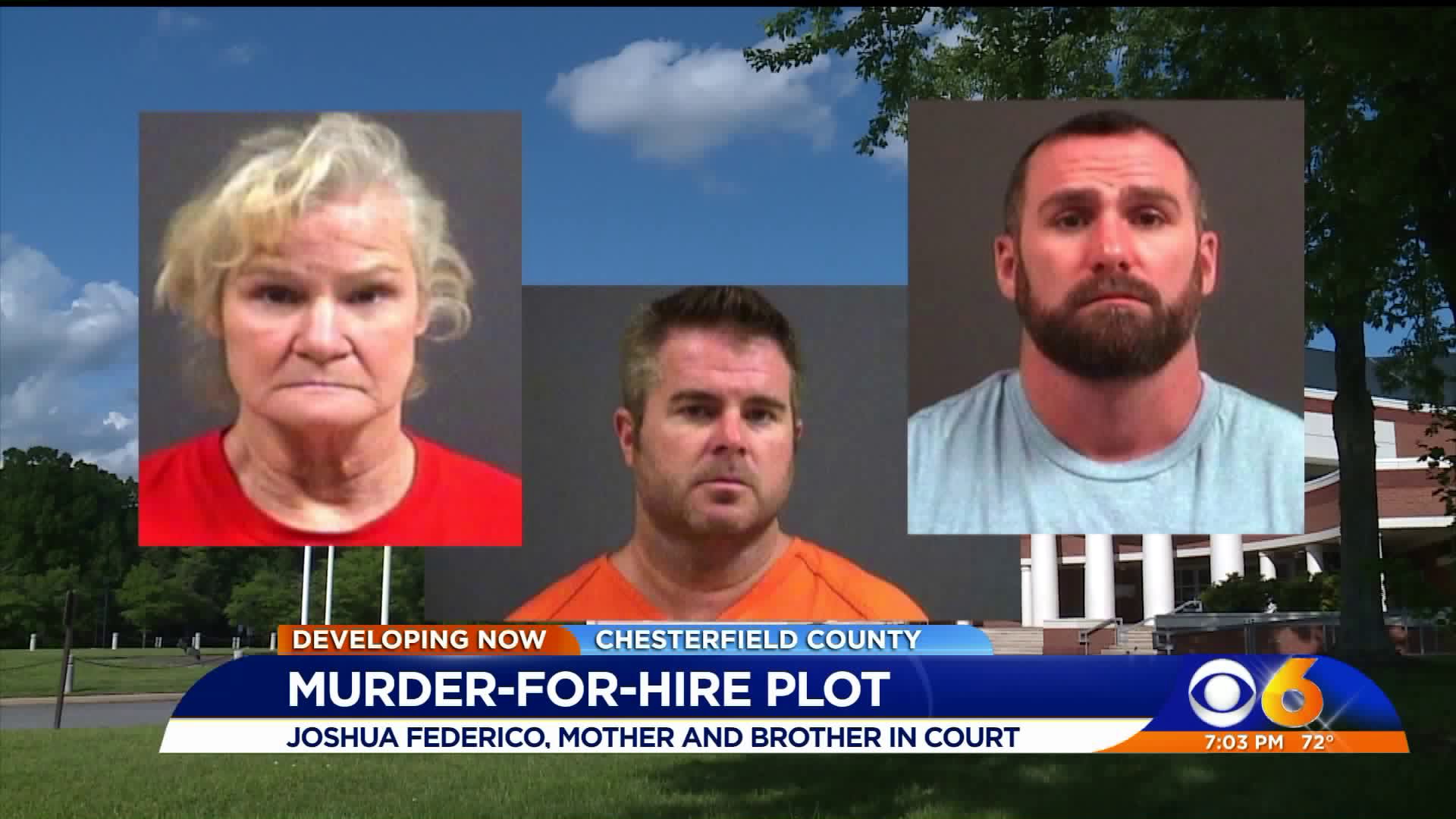 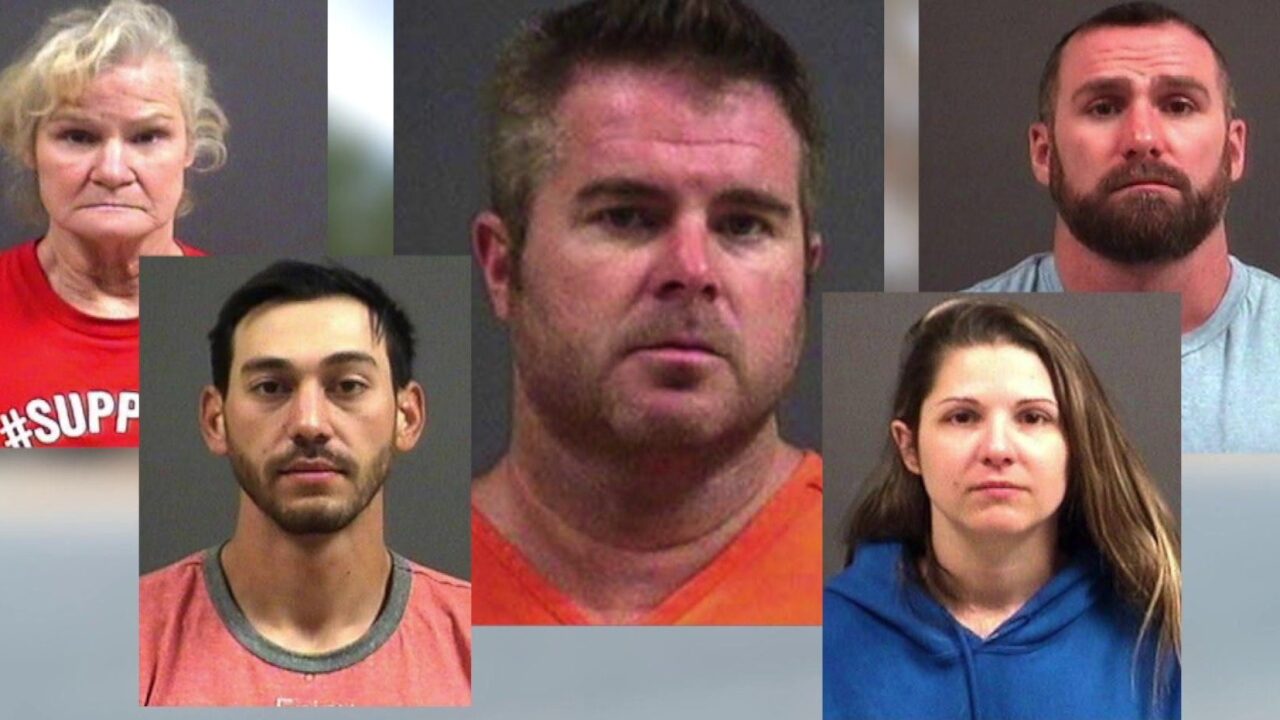 CHESTERFIELD COUNTY, Va - The man charged with shooting his estranged wife and killing her boyfriend began plotting a murder-for-hire scheme from behind bars at Riverside Regional Jail, according to the theory of the case laid out Monday morning by Chesterfield prosecutors.  The defense attorneys for Joshua, Joseph, and Wendy Federico argued that 'talking about a murder plot' and 'putting one in action' were different things.

The preliminary hearing in Chesterfield General District Court was to decide whether or not the long list of charges the three suspects face should be certified to the higher court, but the hearing gave a glimpse into the strategies both prosecutors and defense attorneys will utilize moving forward.

Chesterfield Police previously charged Joshua Federico with murder after the remains of 38-year-old Lawrence J. Howell, the boyfriend of his estranged wife, were discovered in a burn pit at a horse farm adjacent to his home on Second Branch Road on Aug. 24, according to Crime Insider sources.

Federico's wife survived the shooting, and prosecutors said Monday she identified him as the trigger man.

Joseph Federico, Joshua's brother, and Wendy Federico, Joshua's mother, were charged last December with conspiring to plot and carry out the murder for hire scheme at the direction of Joshua, prosecutors said.  Because his estranged wife identified him and a civil lawsuit filed by her family, prosecutors said Joshua Federico was "looking to wipe out" his wife, her father, and her brother.

In court Monday, Chesterfield detectives revealed they obtained a wiretap for two phone numbers belonging to Joseph Federico after they received evidence that the Federicos were plotting the scheme.

Prosecutors played nearly a dozen phone conversations involving Joshua, Joseph, Wendy, and a family acquaintance, where they discussed how to hire someone to carry out the murders and how much it would cost.

The Federicos owned a horse farm on Black Road near Winterpock, and prosecutors said the used coded language while on the phone to discuss the plans.  For instance, a "bail" meant money, and "the sale of the horse" referenced the murder for hire plan.

During one conversation played in court Monday, Joseph Federico expressed frustration with the coded language system, saying that "if the cops were listening" to the recorded jailhouse phone calls Joshua was making, they would be able to easily figure out what they were discussing.

During another call, Wendy Federico said the family should hire their own "resource" instead of working through Joshua's jail contacts, at one point saying, "If I have to do it, I will."

Defense attorneys argued that since the Federicos owned a farm, the coded language was not nefarious and said prosecutors did not provide evidence to the contrary.

Chesterfield detectives testified and played video of a meeting Federico set up who turned out to be an undercover Virginia State Police agent.  The meeting took place in late November at the Wawa near the intersection of Spring Run and Hull Street, prosecutors said.

During the meeting, the VSP undercover agent offers to carry out the murders for $100, 000.  According to the video, Joseph Federico said he was "in a pickle" because his brother was set on wiping out his wife and her family members.

Detectives said they recovered hundreds of thousands of dollars in cash that was either hidden or buried at the Federico's farm on Black Road.

The defense teams pushed back, arguing that while there may be talk of a murder for hire plot, nothing actually happened.

Wendy Federico's attorney noted that although there were discussions, there were no direct threats or even contact with Joshua Federico's estranged wife.  He said the phone conversations sounded like "Dumb and Dumber trying to figure something out," but not being able to organize anything.

Joseph Federico's attorney noted that no money was ever exchanged and that prosecutors needed more than the fact that the Federicos talked about an apparent scheme to prove a conspiracy.

In the end, Judge Keith Hurly certified the three conspiracy charges all three defendants faced to Chesterfield Circuit court.  Judge Hurly also certified a solicitation charge leveled against Joshua and Joseph Federico connected to the plot.  The judge dismissed several other charges for all three defendants faced, including attempted capital murder and obstruction of justice.

All three were held without bond while their case makes its way over to Chesterfield Circuit Court.

Later this year, Joshua Federico is scheduled to go to trial for murder and other charges related to the August 2018 shooting.