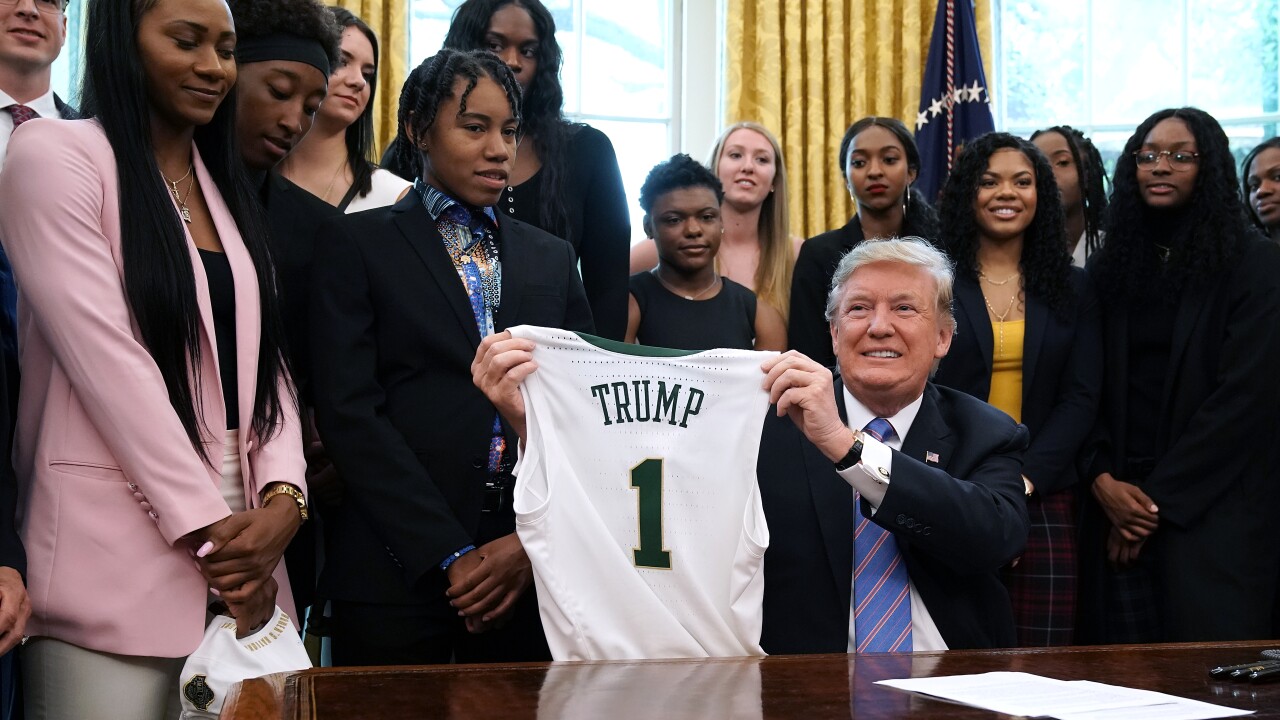 WASHINGTON, DC – APRIL 29: Coach Kim Mulkey (L) and the Baylor women’s NCAA championship basketball team present U.S. President Donald Trump with a jersey during a visit to the Oval Office at the White House April 29, 2019 in Washington, DC. Although the NCAA champion University of Virginia men’s basketball team is skipping a visit to the White House, the Baylor players visited the Oval Office three weeks after winning its third national title with an 82-81 victory over Notre Dame. (Photo by Chip Somodevilla/Getty Images)

WASHINGTON — President Donald Trump, for the first time, welcomed a women’s sports team to the White House for their own event: the 2019 NCAA women’s tournament champion Baylor Bears.

Trump praised the team and their win in a short exchange before reporters.

Baylor head coach Kim Mulkey presented the President with several gifts, including a signed Baylor basketball, a hat and a basketball jersey, which she joked may be a better gift for first lady Melania Trump.

“I’ll give it to Melania. You know, I love those short sleeves. Such beautiful arms. Great definition,” Trump said.

The Washington Post reported in March that the past two WNBA champions — the Minnesota Lynx in 2017 and the Seattle Storm in 2018 — were not invited to the Trump White House, nor was the Notre Dame 2018 championship women’s basketball team.

In 2017, the University of South Carolina women’s basketball team declined their invitation to the White House, citing scheduling concerns.

Coming to the White House has been a controversial political decision for some invited teams during the Trump administration, with many players from multiple teams refusing invitations. The 2017 NBA champions, the Golden State Warriors, declined their invitation after winning the 2017 championship.

Last year, Trump canceled a visit from the Super Bowl champion Philadelphia Eagles team after a number of players declined the invitation.

“The Philadelphia Eagles are unable to come to the White House with their full team to be celebrated tomorrow,” Trump said in a statement at the time. “They disagree with their President because he insists that they proudly stand for the National Anthem, hand on heart, in honor of the great men and women of our military and the people of our country. The Eagles wanted to send a smaller delegation, but the 1,000 fans planning to attend the event deserve better.”

Trump has hosted male athletes several times over the course of his presidency, a tradition that gained momentum during the Reagan administration. There have been events honoring the Clemson and Alabama men’s football teams, 2017 Super Bowl champ New England Patriots, the Stanley Cup-winning Washington Capitals and NASCAR Monster Energy Cup Series champion Martin Truex, among others.

Recently, Trump has started a new tradition of buying teams fast food from McDonald’s and other establishments served up on fine china and silver. It first began when the Clemson University football team visited the White House during the government shutdown to celebrate their national championship win. Trump has done the same for the North Dakota State Bison football team.

On Monday, the Baylor Bears were treated to the same fast-food spread.