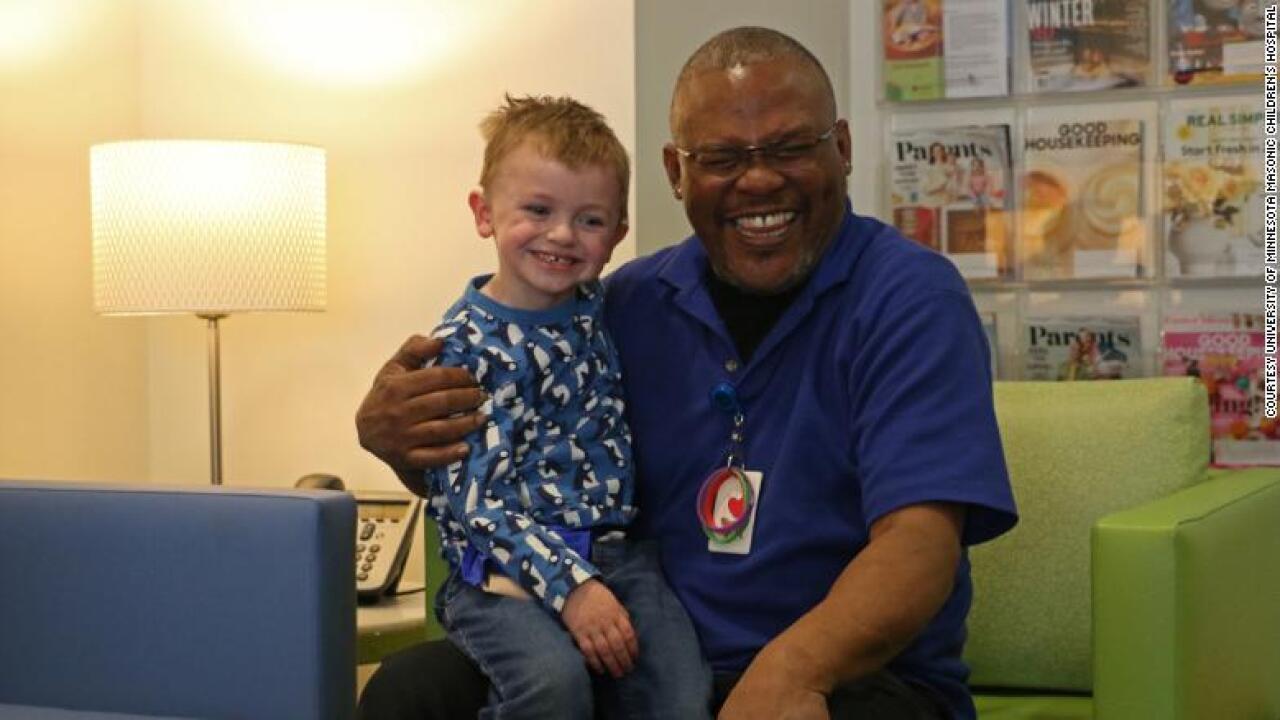 The friends first met a year ago when 4-year-old Cooper Baltzell was driving a toy car down the hospital corridor, handing out candy to the staff.

It was during one of Cooper’s many hospital stays for Hirschsprung disease, a rare, inherited condition affecting the body’s digestive system.

That’s when he bumped into 57-year-old Gregory Watson, a housekeeper at the facility.

“I was doing a discharge and he goes, ‘Sir do you want some candy?’ I’m like ‘Oh yes!'” recalled Watson.

The little boy quickly connected with the man. This is the story of how the pair became best friends.

The beginnings of a friendship

Watson cleaned Cooper’s room every day during his stays. Their friendship grew.

“Cooper would be really bummed when Gregory wasn’t there and somebody else was cleaning the room,” Cooper’s mom Ashley Baltzell said.

“Gregory is also a chatty guy. It’s kind of a match made in heaven.”

The hospital housekeeper feels it’s part of his job to be friendly to the families and the children who sometimes have to endure painful procedures during their stays.

Watson, who has two grown sons of his own, met dozens of families during the nearly nine years he’s worked at the hospital. It can be hard on his heart to see sick kids every day.

But he bonded with Cooper in a big way.

“He’s the coolest kid I ever met,” Watson told CNN.

“He’s just so outgoing and always has a good attitude. Most kids — when they’re sick, they’re not happy. He’s always happy. Always.”

Bonding over popcorn and coloring books

Cooper doesn’t like being stuck in his room, his mom said. He wants to go out and talk to everybody.

“He’s a familiar person that Cooper can go and chat with in between getting poked — really unpleasant procedures to get things moving through his body,” she said.

And their friendship gives mom a break too.

“It’s nice for me to have somebody who’s friendly and talks to you coming into your room.”

The two buddies will get popcorn together. (Popcorn actually is good for Cooper; he needs the salt to offset the serious dehydration the disease causes.)

They also go on little field trips to the slushie machine and bond playing with Cooper’s toy cars and his superhero capes.

They color together. And they talk and talk.

“You really have to listen to him. You’re not going to catch every word. He’s four-years-old,” Watson said. “But you’ll catch some of it.”

Cooper hasn’t needed to go to the hospital lately; he’s doing much better. But he misses his friend.

HIs mom noticed him eyeballing a toy cleaning kit one day which had a little mop in it.

“He’s just been playing with it the last few weeks,” she said. He mops the floor in the house and says “I’m Gregory.”

“Like he’s never seen me clean the floor. He totally has,” she laughed.

His mother gives him stickers and he gets a prize each time he goes in the potty chair.

The prize he asked for this time? To visit the hospital and his best friend again.