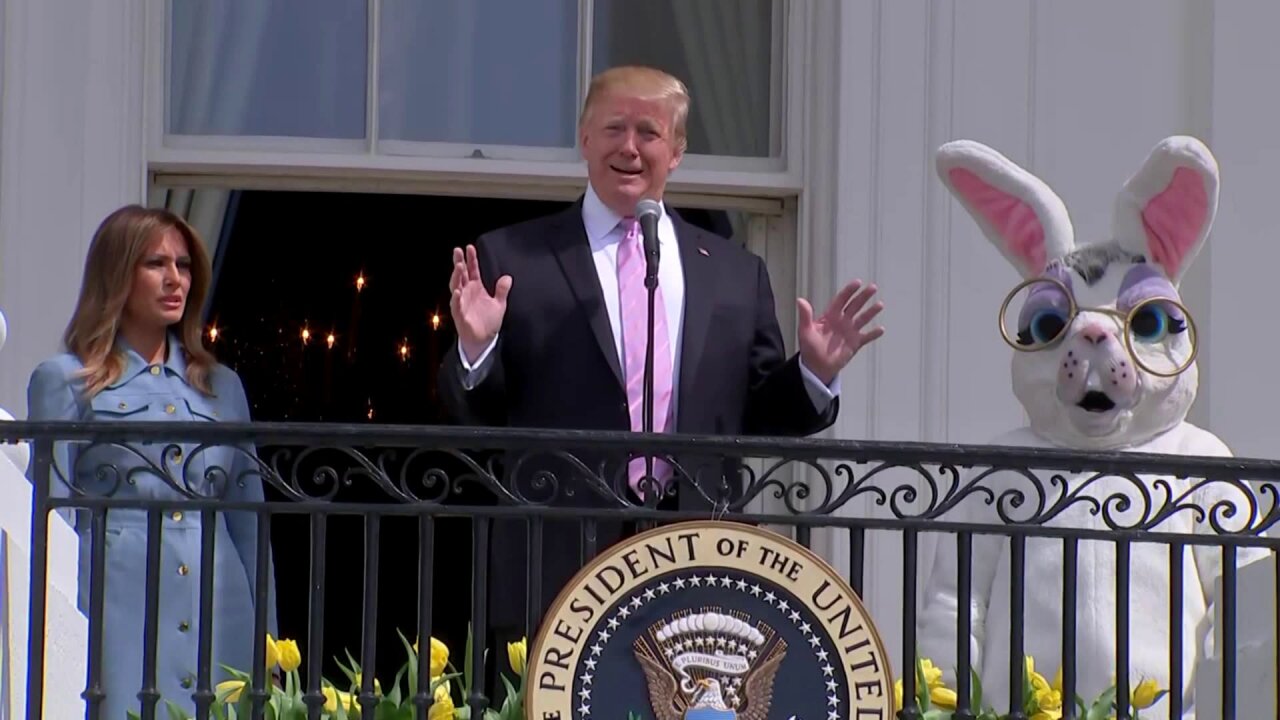 Noting that it was the 141st White House Easter Egg Roll, President Donald Trump joked: “I don’t remember the first one, but the last three years we’ve had an awfully good time.”

He also thanked the first lady for her “fantastic” work during brief remarks from the Truman Balcony, where he was joined by a military aide playing the role of the White House Easter Bunny.

Orchestrated by the East Wing, the Easter Egg Roll featured activity stations, including the first lady’s new addition of musical eggs and “Be Best” hopscotch, as well as egg and cookie decorating stations, a state egg display, cards for troops and costumed characters.

In honor of the first lady’s “Be Best” initiative, children had the opportunity to “spread kindness to anyone they choose … directly through a United States Postal Service mailbox that will be on the South grounds,” per the Office of the First Lady.

Trump spent some time at a picnic table with children decorating the postcards, with one child encouraging him to build the wall on the US-Mexico border.

“They just said, ‘keep building that wall,’ can you believe that? He’s gonna be a conservative,” Trump said.

The first lady, press secretary Sarah Sanders, and Secretary of State Mike Pompeo were among the featured reading nook readers this year, and deputy attorney general Rod Rosenstein was spotted enjoying the day’s festivities. The White House expected nearly 30,000 attendees at the event, which featured entertainment from the US Marine, Army, Air Force and Navy Bands.

The egg rolling tradition began in the 1870s on Capitol grounds. After a particularly rotten 1876 roll in which eyewitness John C. Rathbone observed “the wanton destruction of the grass on the terraces of the park,” President Ulysses S. Grant signed legislation to protect Capitol grounds, which prohibited egg rolling, per the National Archives.

But in 1878, a more egg-friendly President Rutherford B. Hayes allowed children to roll their eggs on the White House South Lawn.

According to an article in that evening’s edition of the Evening Star, per the National Archives, the children were quite pleased with their new egg rolling headquarters: “Driven out of the Capitol grounds, the children advanced on the White House grounds to-day and rolled eggs down the terraces back of the Mansion, and played among the shrubbery to their heart’s content.”

Now, 140 years later, the tradition continues, this year as a collaboration between the White House, the White House Historical Association and the National Park Service.

It’s always been a big production for the first lady’s office.

Florence Harding dyed the eggs herself in 1921, The Washington Post reported.

In 1927, the Post reported that Grace Coolidge brought her pet raccoon, Rebecca, out on the grounds on a leash, much to the raccoon’s chagrin.

“The crush was too much for Rebecca and she showed her displeasure plainly. But the first lady was not so easily discouraged. She carried the pet indoors and returned to the delight of the crowd,” the report said.

Eleanor Roosevelt oversaw the egg roll during her husband’s four terms in office, including 1937, when more than 50,000 children attended. Cold weather was to blame for depressed turnout in 1940, when just under 5,500 children attended, per the Syracuse Herald-Journal.

During the Obama administration, first lady Michelle Obama used the egg roll to promote her “Let’s Move” initiative, and the star-studded lineup included performances by Justin Bieber and Ariana Grande. Beyoncé and Jay-Z were among the attendees in 2016.

To this day, the egg roll remains one of the only times of the year that the White House South Lawn is open to the public (with tickets) to enjoy.

In addition to the thousands of hard boiled eggs on the South Lawn, guests received an official wooden White House Easter Egg.

The Incredible Egg, which provides all 74,000 real eggs for rolling, dyeing and eating, also provided the first lady with a commemorative egg gift of her own, intricately emblazoned with “Be Best.” The 2019 Commemorative Egg, the 42nd of its kind, was designed by artist Cecilia Glembocki, the executive director of the Virginia Egg Council.

The ornate real egg was presented to the first lady by representatives of the American Egg Board on Monday morning.